“Midnight is approaching, but Putin is still gone”: should we wait for the Russian army to invade Ukraine? 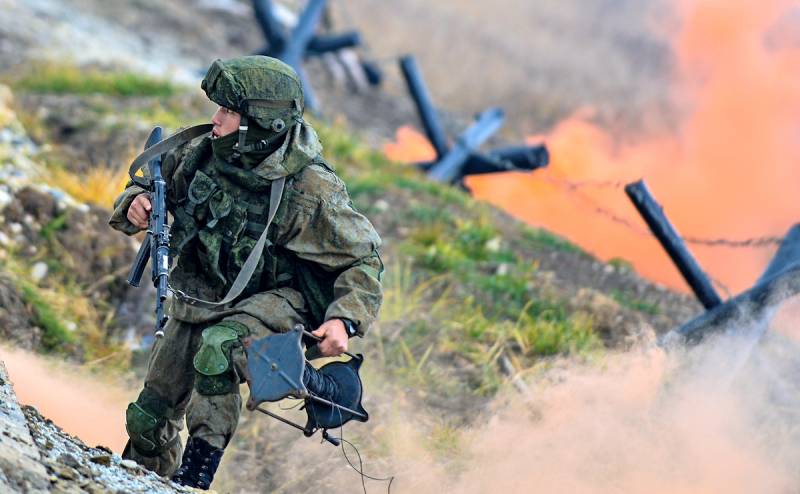 RAND Corporation, a highly influential analytical company in the USA (by the way, one of the pillars of American analytical thought, which has been conducting an independent examination in the interests of the Pentagon and the US government regarding national security and defense issues since 1948), recently published a certain scenario of the development of events, according to which the Russian Federation to establish control over the Kerch Strait occupies about. Tuzla, after which the troops from the Kuban under the cover of the Black Sea Fleet will rush to Ukraine.


At the same time, the marines of the Russian Federation’s marines from Novorossiysk, with the support of local residents, capture Sevastopol, to which the General Staff of the Armed Forces of Ukraine is forced to transfer air-assault brigades from Dnepropetrovsk and Nikolaev, Kirovograd and Ochakov to the conflict zone. And on the peninsula of the Crimean Tatars, resistance units are urgently formed.

According to American experts, the outcome of the conflict is clear - Ukraine will suffer a crushing defeat and will be forced to turn to the West for help. But, according to overseas analysts, volunteers will be formed in the west and east of Ukraine to support the opposing belligerents, after which the country will inevitably be in a state of civil war.

Nothing confuses you in this scenario? I was only embarrassed that the marines from Novorossiysk seized Sevastopol when the city was ours. And why do you need a landing from the mainland when the base of the Black Sea Fleet is located on the peninsula? Everything becomes clear and understandable when you find out that this script was written exactly 12 years ago on July 9, 2008 (the Russian Independent Newspaper gave a leak from the Pentagon stronghold). And after all, how the gentlemen of the imperialists looked into the water. And they were not mistaken with Crimea, and guessed with the civil war. And who will prove to me now that all the events of 6 years ago in Ukraine were not pre-planned somewhere on the shady banks of the Potomac? Although Kiev still believes that Putin hatched plans for the capture of the Crimea from childhood. Well, let's not disappoint them. Now Putin already has little Crimea, he is eager for the mainland. We will talk about this below.

On According to Poland’s former ambassador to Ukraine, Jan Peklo, in the near future Putin plans to demonstrate to the Russians that he is a strong leader, and the citizens of the Russian Federation have not in vain voted for amendments to the Constitution - the Russian president, in his opinion, is waiting only a moment for aggression. And the next meeting of the “Norman Four” that ended in nothing in Berlin and the US presidential campaign going to the finish line just unties his hands and facilitates the solution of the task. What the other day solemnly and reported Polskie Radio.

The Russian attack can be carried out on a humanitarian pretext in order to provide the Crimean peninsula with water - only a moment is waiting for the attack, and this will happen pretty soon,
- quotes Polskie Radio the words of a former Polish ambassador with a speaking surname Peklo (“hell” in Ukrainian means “hell-hell”).

Polish ex-ambassador echoes the former commander of the US forces in Europe, General Ben Hodges, who in an interview with Ukrainian media literally stated the following:

I hope I am mistaken, but I have a vision, a scenario that this is so typical of what Russia has done in the past, that during the exercises in the Caucasus, they will declare a humanitarian crisis in Crimea due to water, and then say that they have no choice. They must capture the dam in Kherson in the north to allow water to return to Crimea.
Is it any wonder that after this, the eyes were opened by the current Deputy Minister of Foreign Affairs of Ukraine Vasyl Bodnar, who also connected the beginning of Russian aggression with the Caucasus 2020 exercises, which will start in the fall:

The opinion about the possibility of a military offensive is shared by a significant number of military experts and analysts. NATO also understands how realistic it is to use Russia's military potential against Ukraine, and its activation is possible just in the near future. Therefore, we need to be mentally prepared for the fact that Russia will not stop before using its armed forces to achieve its political or economic goals.
A diplomat far from military affairs, immediately interrupting each other and putting forward his own versions of the development of the Russian offensive supported and the Ukrainian generals in the person of Leonid Golopatyuk (lieutenant general, former acting deputy chief of staff of the Armed Forces of Ukraine) and Sergey Krivonos (major general, former deputy secretary of the Council of National Security and Defense of Ukraine). And by the number of generals per capita, you know, Ukraine is second only to North Korea. After which the degree of virtual Russian-Ukrainian confrontation began to approach critical. The pan lid began to shake. When the Ukrainian brothers in diagnosis were united with Polish and American neighbors in the ward, I had the feeling that I was missing only someone who would follow the example of former US Secretary of Defense James Forrestal, who, in the midst of the USSR-US confrontation, shouted: “The Russians are coming ! " Ciganul from the 16th floor. Moreover, it is not a fact that the Ukrainian Forrestal will jump at will. In Ukrainian traditions - to help him in this, and then blame everything on Putin. There is even a suitable candidate for this role. Andrey Parubiy. He already has a certificate from the madhouse, all that remains is to find a suitable 16th floor. The only difference is that Forrestal, a lieutenant of aviation of the US Navy reserve, was buried with honors at Arlington National Cemetery and his name received a new type of US strike aircraft carrier USS Forrestal (lead ship CV-59), while Parubia was waiting for a cesspool and, at best, his name will be called some madhouse in his homeland in Chervonograd, Lviv region.

For some reason, it is believed that exacerbation of mental illness occurs in the early spring and late fall, but the Ukrainian and Polish and American patients of the Institute named after him. Kashchenko successfully refuted these semi-scientific theories this hot summer, which once again shamed the heirs of the great Russian psychiatrist. And I would not attribute all this to the side effects of the treacherous coronavirus COVID-19. Believe me, he has nothing to do with it.

The adversary, the rear commander of the Navy, the rear admiral with the last name Neizhpapa (literally from Ukrainian - “Don’t eat dad”), who was interviewed by the Odessa newspaper Dumskaya on the occasion of the anniversary of his creation departments where allowedthat the troops of the Russian Federation will try to break out of the occupied Crimea to the Kherson region to give the opportunity to let water from the Dnieper into the North Crimean Canal.

As soon as we understand that the canal will begin to recover in Crimea, the financial resources of the Russian Empire will flow there (yes, I call them that: it is an empire with a dictator at the head), this will be a sure signal that the Russian Federation is preparing for a full-scale confrontation. And then we will have to answer the challenges. We are preparing for a full-scale military confrontation, realizing that if this happens, then, unfortunately, it will be a lot of losses - both our soldiers and the civilian population. Many now do not understand this - although the country has been in a war for the seventh year.
It is clear to you, gentlemen, that we have been in a war for the seventh year now, only Putin hasn’t come to it. He’s already been invited, and so on, and he, you know, buzzes his own: “Observe the Minsk agreements signed by you and approved by the UN Security Council.” Well, what are you going to do with him here ?! Already the integral commander of the Ukrainian Navy, having linked a 3-day ultimatum to the implementation of the Minsk agreements or an official refusal to fulfill them, presented by the Russian side to the Ukrainian side on the eve of their last meeting in Berlin in the Norman format, calls the exact date for the start of the Russian invasion - July 7, 2020, So what? Where is the invasion, I ask you? Midnight is approaching, but Putin is still gone! Aw, gentlemen! July 7th is long gone. Where is Putin? Or, again, order to wait for the fall? Yes, how much can you? How many such autumn-winters have we already waited for! Where is the promised war ?! How long can she wait ?! In the meantime, the war is only in military offices and in the heads of politicians, astronomical budgets that are successfully stolen by those in power are written off under it, and people notice that according to the forecast of the Ukrainian and American military, this week Putin will attack Ukraine especially often.

And after all, some particularly impressionable citizens even believe this, checking every day whether Putin is sitting under their bed or not. If you sit, it’s clear who is to blame for all their troubles and misfortunes. Although in the current state of affairs in the army and navy, what kind of Russian army and invasion can we talk about? If you wish, Ukraine can be captured by any medium-sized Chechen wedding in a couple of days. One trouble - no one needs Ukraine for nothing. While the Ukrainian military is changing camouflage pants to pants with stripes and changing portraits of presidents on the walls of their offices, the country is falling apart. Soon, Putin will no longer be attacked!

There are a lot of beneficiaries of such rumors, from the office of President Zelensky, who is trying to distract the people from his pressing problems in this way, to the party of war led by the suspect Poroshenko, for whom Russophobia has become a working brandy, on which he is trying to return to power, showing the cross-country people that the current the president is so weak and weak that he is not able to adequately resist the existing direct and obvious threats from the aggressor country. Even the Opposition platform “For Life” may be interested in fanning these rumors, which, through the lips of its leader Vadim Rabinovich, predicts that Zelensky will become the last president of Ukraine, not to mention the stronghold of democracy in the United States, which thus tries to demonize Russia as much as possible in the eyes of Europeans and thereby disrupt the completion of the SP-2.

Whatever it was, but things are still there - the seven nannies have a child without an eye! And Ukrainians who were scared by horror stories: “Putin will come, and with him the end”, it would be right to ask the forecasters: “Well, the end has come - and where is Putin ?!”. The question is rhetorical, we will leave unanswered.
Ctrl Enter
Noticed oshЫbku Highlight text and press. Ctrl + Enter
We are
Ukraine from the inside: traitors, curators and those who watch from the Kremlin
Ten "defeats" of Putin
Reporterin Yandex News
Read Reporterin Google News
21 comment
Information
Dear reader, to leave comments on the publication, you must sign in.