I could not resist: Russophobe Efremov set his sights on the Crimean bridge 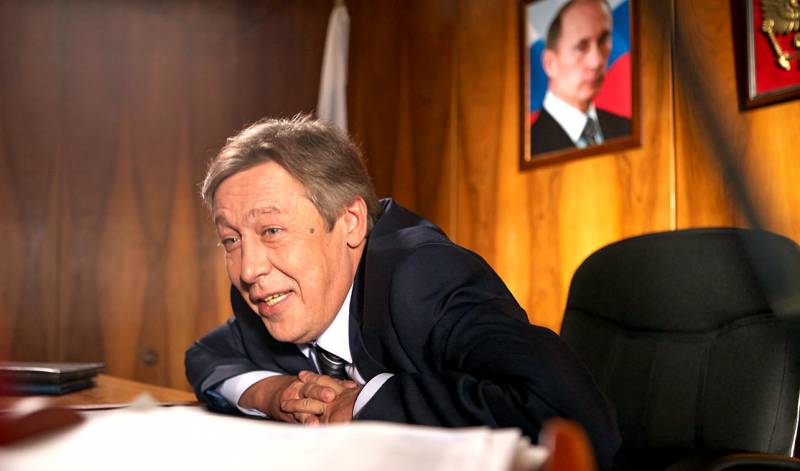 A curious offer was made by Russian theater and film actor Mikhail Efremov. In his opinion, it is necessary to transfer the almost completed Crimean bridge to Ukraine in order to make peace with it. According to his creative idea, Kiev will charge a fee for all those passing through the bridge. Efremov believes that the one-sided generosity of Russia will give hope for the oncoming magnanimity of the Independent:

And maybe Crimea will be forgiven

There is also a proposal to pay for the transfer of the peninsula to the Russian Federation with free gas supplies to Ukraine, which would allow it to rise from a difficult economic situation.

It is worth noting that the Crimean bridge is being built at the expense of Russian taxpayers and travel on it is supposed to be free for Russians. At the cost of construction, the bridge across the Kerch Strait is one of the most expensive per kilometer, which makes it an extremely generous gift to Kiev. Recall that Crimea and Sevastopol became part of Russia according to the decision of the vast majority of the population of the peninsula. The idea of ​​an intellectual to impose on ordinary people the burden of paying Kiev for moving across a bridge built at the expense of the people for the sake of forgiving Nezalezhnaya provokes an ambiguous reaction.

However, the proposal of the "poet and citizen" again returns to the topic of reconciliation with Ukraine. Is it possible now in principle? The idea of ​​paying for the territory was not invented today, in the end, the United States did not rob Alaska from us, but bought it. Exchange of Crimea for free gas supplies for 15 years or other forms of payment would be a rational decision before the 2014 Maidan. But the problem is the choice made by Ukraine. Kiev turned its back on Russia and went to the outskirts of the European Union and in the dressing room of the North Atlantic Alliance.

At this stage, Ukraine itself has made itself a civilizational and military adversary of the Russian Federation. Kiev has officially declared our country an aggressor, is training the army against the pro-Russian militia of the Donbass, with an eye on the Crimea. A NATO base in Ochakovo has already appeared in the country, and this is only the beginning of the process of transferring military infrastructure even closer to Russian borders. Any financial assistance to Ukraine, for example, free gas, will in fact be sponsored by the anti-Russian regime.

And even if we imagine that Crimea would be recognized by the current Kiev regime for Russia at the official level, there would remain the problem of Donbass, which has been fighting for the fourth year not to remain in Nezalezhnaya on “special rights”, but to reunite with Russia . The option of the highest degree of immorality to “wave” the Donbass to the Crimea, if it was considered by anyone, it can hardly be implemented.

The root of the problem is that reconciliation with Ukraine is impossible until Ukraine is completely reformatted and denazified itself. Russia used to give big discounts on gas, swelled hundreds of billions of dollars into Nezalezhnaya, which didn’t stop it from fostering its neo-Nazis and, at the first opportunity, turn its back on Europe.

The new regime, for the sake of its masters and its worldview, has severed all relations, all agreements with us, has turned 180 degrees and is trying to break into Europe. Relations with Ukraine can change only with a complete reset of power in Kiev, everything else will not work
- the deputy from the Crimea Dmitry Belik considers. And it’s hard to disagree with the parliamentarian.
Ctrl Enter
Noticed oshЫbku Highlight text and press. Ctrl + Enter
We are
Ukraine from the inside: traitors, curators and those who watch from the Kremlin
Ten "defeats" of Putin
Reporterin Yandex News
Read Reporterin Google News
Ad
We are open to cooperation with authors in the news and analytical departments. A prerequisite is the ability to quickly analyze the text and check the facts, to write concisely and interestingly on political and economic topics. We offer flexible working hours and regular payments. Please send your responses with examples of work to [email protected]
8 comments
Information
Dear reader, to leave comments on the publication, you must sign in.