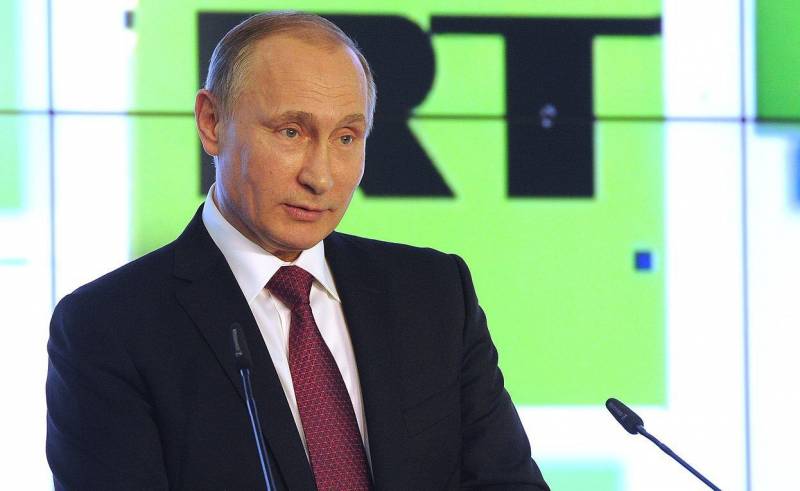 The “Civilized World” celebrates yet another victory over “pro-Kremlin propaganda” - a wave of bans on broadcasting programs of the Russian media group RT swept through the Baltic countries. And no matter how many representatives of the channel popular in many countries try to reduce everything to the “phenomenal foolishness” of russophobic heads of certain bureaucratic structures, the matter is much more serious.


There is reason to believe that this is only the beginning of the next round of the world information war, in which our opponents have not complied with any rules for a long time. Will Russia be able to give a decent response to attacks - both current and emerging?

Russians need to shut up ...

Latvia became a fighter in an offensive launched against RT. The local special services loudly declared the channel "the most influential instrument of Kremlin propaganda in the West." The countries at the National Council for Electronic Mass Media reacted surprisingly promptly and, thanking the "fighters of the invisible front" for the "timely signal", decided to ban the broadcasting of the RT, RT HD, RT Arabic, RT Spanish, RT Documentary HD, RT channels on Latvian territory Documentary, RT TV. The motivation is as simple as a brick: all of them are “under the sole control and supervision of the Russian propagandist” Dmitry Kiselyov. Obviously, they are experiencing some particularly deep horror in front of him ... However, what is happening is nothing but the implementation of the state policy by "squeezing" out of the country, and above all, from its information space in general all Russian.

At the beginning of this year, the President of Latvia, Egil Levits, appealed to the Commission of the Seimas Human Rights and Public Affairs Commission with an urgent proposal to “correct” the law on electronic mass media so that Russian-language broadcasting in no case would amount to more than 20% in program networks (and not only on-air channels, but also cable networks and even broadcasting television programs of electronic media). RT was simply taken in the first place, as the most popular channel. They tried to teach their own mouse fuss about peace with maximum pathos and fanfare: Ivar Abolins, the chairman of the National Council who blessed the prosecution, said that for programs like those “produced by RT”, “there is not and cannot be a place not only in Latvia, but and throughout the European Union, ”while urging everyone to a single EU state to“ reject the Kremlin’s propaganda ”with anger and disgust and cling to the crystal clear sources of“ quality and pluralistic information. ”

I must say that, following his statements, the followers of this not too adequate figure were found almost immediately. Latvia banned RT on June 30, and literally a week later, puffed up and strained, its neighbor Lithuania, exactly the same lawless decision, was “born”. True, the local bureaucrats turned out to be a little more cunning, having decided to hide behind the back of the “decisions of the European Union”. Mantas Martisius, the head of the local Radio and Television Commission, specified that the broadcasting would be stopped “not because of violations,” but, you see, because “the person associated with the channel was included in the European sanctions list.” Speech in this case, again, is about Dmitry Kiselev. He, according to the same Martisus, "should not receive benefits." Obviously, according to Lithuanian officials, it’s huge for RT from broadcasting in their tiny country ... By the way, a kind of “feint with the ears” allowed tricky Lithuanians to turn things around quickly and quietly: at a meeting of the Commission at which the upcoming ban was discussed, RT representatives did not even invite. Today, Estonia is also thinking about blocking the broadcasting of our channel. According to the head of the Foreign Ministry, Urmas Reinsalu, in his country they “fully approve” the actions of the neighbors, but first they will try to observe the appearance of decency: “conduct an audit” of how much the RT ban “will facilitate the implementation of financial sanctions”. The final result of these hypocritical actions, however, can be no doubt. And here, with the advent of gentlemen of diplomats, we finally come to the heart of the matter. Namely - to that very obvious fact that the team “Fas!” regarding our television channel, a whole bunch of Baltic mongrels sounded at the same time, and from the owner, who is far beyond the borders of both the Baltic States and Europe.

The same Mantas Martisius, some time later stopped breaking comedy and frankly admitted: the decision to stop broadcasting RT was on the agenda of the Lithuanian Television and Radio Broadcasting Commission after he received the relevant instructions from the Ministry of Foreign Affairs. They directly stated: “the channel is distributing content beneficial to the Kremlin”, which means “Atu it!” And again in the case, diplomats, obviously reverently clinging to the freshest "training manual" received from Washington, and rushing headlong rushed to carry out the tasks assigned to it. And there is no doubt that there can be no doubt that everything that is happening in the Baltic region is once again heard by the “ears” of the “politicians” who turn around there, like the most ordinary puppets of the United States.

Let me remind you - back in 2011, then Secretary of State Hillary Clinton called for additional funds to be allocated to her department specifically for the "information war" that the Americans are "losing to RT." On this occasion, one can also recall the revelations of one of the successors of the frenzied Hillary at her post - John Kerry, who in 2014 attacked the TV channel with accusations of “propaganda and distortion of facts” regarding the bloody coup d'etat that took place in Ukraine in those days, organized according to the American scenario . There are a great many examples of this kind, and all of them will testify only to one thing: representatives of whatever party were masters in the White House and the State Department, would not sit in the US Congress, our RT there is perceived solely as an enemy. Moreover, the enemy is so powerful that representatives of the American government sometimes simply break down into elementary tantrums and rudeness in dealing with its representatives, being unable to hide their own impotent anger. Hence the desire to inflict maximum damage to the channel, acting with the hands of submissive satellites.

On the other hand, accusing Russian television of “propaganda”, “promoting the Kremlin’s information agenda”, “biased reporting of information” and the like, the Americans themselves do not even find it necessary to hide their own intentions regarding the “brainwashing” of our compatriots, and on our territory! In particular, as it became known recently, only for the “promotion of American culture in Russia” the State Department intends to allocate very substantial amounts in the near future. In particular, 300 thousand dollars will be allocated only for technical and logistical support for the Subject Matter Experts Program, under which our citizens will have to "explain the characteristics of the culture and foreign policy of the United States." Something tells me that the emphasis here will not be on the first part (Americans and culture! It's already funny ...), but on the second. At the same time, specially involved “specialists from the USA” will be involved in the implementation of these intentions. A heap of "educational and print materials, materials for the media and social networks" is being prepared.

Obviously, in this way the Russians will try to convince that Washington’s actions to strangle their country with sanctions, destabilizing events both in Russia and on its borders, as well as many other things in the same vein - all this is done exclusively for their benefit. What other “features of the US foreign policy” need clarification in the eyes of Russian citizens is hard to imagine. However, the gentlemen from the State Department have bigger plans too - so far they intend to invest only some 50 thousand dollars in the “promotion” of their next project, but this is clearly only the beginning. We are talking about the mass involvement of Russian schoolchildren in the “study of the joint history of our countries”, for which it is planned to create a variety of “educational projects, including sites, related applications, AR- or VR-platforms”. In a word, the goal is the preparation of the new “Kohl from Urengoy,” only pro-American.

The fact that such actions are already being carried out with might and main, and, alas, is not unsuccessful at all, is convinced every time that some readers of our resource perceive almost as a personal insult attempts to tell the truth about the ambiguous role of the United States in World War II and the Great Patriotic War, about them insidious and aggressive actions towards those who considered them allies. Unfortunately, the efforts to fashion from “great America” a sincere friend, a generous and generous “partner” of our country, undertaken during the period of “perestroika” and somewhat later, were not in vain. To some, these popular images have sunk into the soul so much that they continue to believe in them, contrary to a completely obvious reality. Apparently, the US State Department intends to maximize this effect and strengthen it by embarking on a brainwashing of our children from school. No wonder - after all, such a practice was more than successfully “run-in” in neighboring Ukraine. Incidentally, the American embassy there continues to distribute relatively generous grants for “creating media products,” for example, “Maidans,” “Russian aggression,” and the like. Washington does not spare money on the information war. There is no doubt that something similar has already been prepared for Belarus - the local “zmagars” will openly receive funding for this line from the US Embassy as soon as it resumes full-fledged work in Minsk, and this is likely to not be long awaited. On the other hand, judging by the processes taking place in the country, certain American organizations and structures are already conducting their own activities there of a very definite nature, and in full swing.

They continue to systematically surround Russia with a ring of unfriendly states, while at the same time trying by all means possible to "shut up" and deprive them of the opportunity to defend their own position in front of an international audience. Will a worthy answer be given to these demarches? So far, there has been no reaction, except for the languid rebuffs of the embassies, the Russian Foreign Ministry on duty comment on the “cynical encroachment on freedom of speech,” the requirements for the OSCE to “respond” to them (joke, please ?!), and the calls in the State Duma to “not act situationally” followed by. With such a strategy and tactics in any wars (and information, including), victories do not win. So they lose ...
Ctrl Enter
Noticed oshЫbku Highlight text and press. Ctrl + Enter
We are
Ukraine from the inside: traitors, curators and those who watch from the Kremlin
Ten "defeats" of Putin
Reporterin Yandex News
Read Reporterin Google News
15 comments
Information
Dear reader, to leave comments on the publication, you must sign in.