“They sing a hymn”: in the West they were surprised at the patriotism of Russian youth 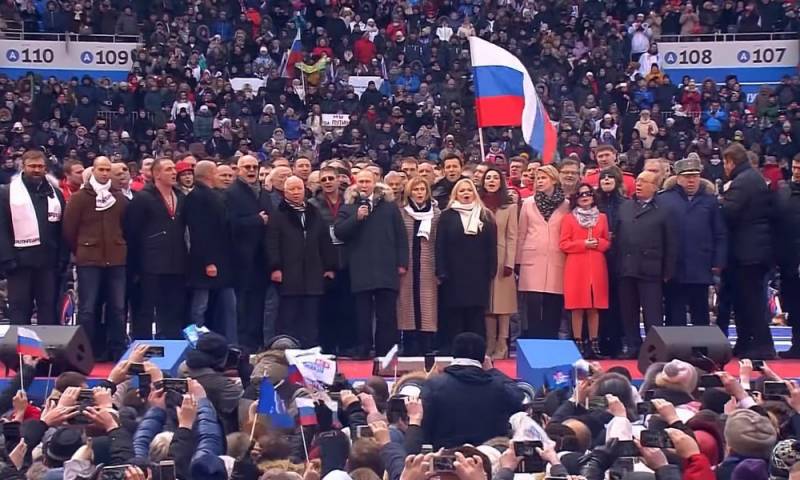 The generation of young Russians born or who entered a conscious life under President Vladimir Putin is discussed by Jill Dougherty on the website of the Woodrow Wilson International Science Center.


The author notes the fact that Russian teenagers and youth look and dress exactly like their European and American peers. In any case, in Moscow and St. Petersburg.

In addition, their политическая activity. Mention is made of youth participation in the protests of 2011-2012, as well as 2017. In particular, the journalist spoke about her own observation of one of the protests.

While the group was filming a video from the window, I went to the next room, where I noticed on the balcony of a young man (he was about 18 or 19 years old) watching the crowd below. Despite the anti-Putin cries, some of the protesters carried small Russian flags, and, to my surprise, began to play the national anthem. The teenager on the balcony joined in, singing softly, clearly moved by this spontaneous manifestation of patriotism
- the author notes, while not specifying what kind of anthem she expected to hear instead of the Russian one.

The article also voiced the opinion that a full-fledged “Putin's” generation does not exist.

Vladimir Putin is not a determining factor in the minds of young people. More important is access to the World Wide Web.

The “Generation of Putin" (most studies define him as young Russians aged 17 to 25 years) is relatively small, it makes up only about 9% of the total population of Russia, according to most estimates. Its representatives are diverse, living in large cities such as Moscow and St. Petersburg, as well as in small towns and villages throughout the country. Them economic the situation varies greatly, as does their access to higher education. But all are united by two factors: this is the first fully post-Soviet generation in Russia and the first generation that grew up with the Internet
- noted in the publication.

The Internet has a special place in the life of youth. Oppositionist Alexei Navalny and journalist Yuri Dud are named here as leaders of public opinion.

The author believes that the acquaintance of young people with the Internet and the rest of the world affects their opinion about the West.

Despite the anti-Western sentiment of the Russian state-run media, this generation is generally positive about Europe and the United States.
- the text says.

This does not mean, however, that young Russians are attracted to Jefferson’s ideals of democracy. For them, the West is a place where everything is stable, where everything works, where the rights of ordinary citizens are protected, where the samples of popular culture come from.

Some young Russians say they want to leave the Russian Federation and emigrate abroad, and, according to the Levada Center, their share reaches 45 percent in large cities. This surprising figure, however, is more an expression of dissatisfaction than an actual intention to emigrate. Only 1 percent of Russians actually leave their homeland forever.
Ctrl Enter
Noticed oshЫbku Highlight text and press. Ctrl + Enter
We are
Citizens of Western countries in quarantine sing Soviet war songs
The Greeks drove the Ukrainians out of the hotel because of the Bandera flag.
Reporterin Yandex News
Read Reporterin Google News
4 comments
Information
Dear reader, to leave comments on the publication, you must sign in.