What is the United States trying to hide behind a lie about the collusion of Russia with the Taliban? 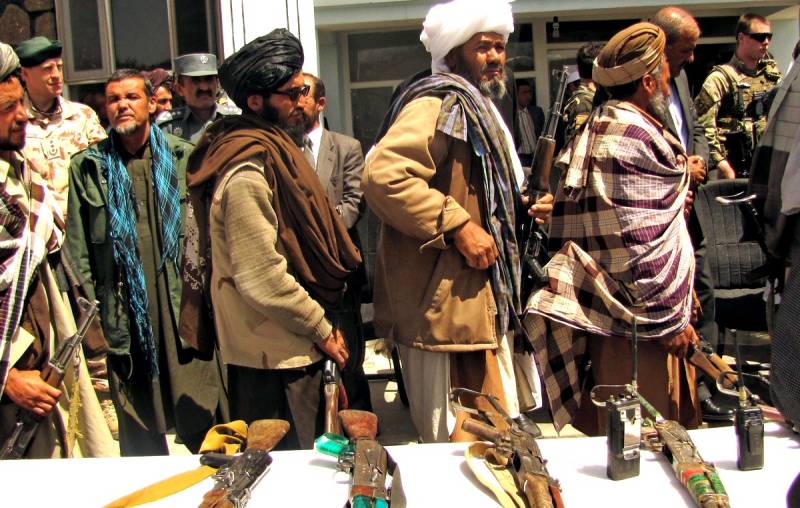 In the United States, the "promotion" of a frankly contrived scandal around fake information about the allegedly "proposed by the GRU of the General Staff of the Taliban militants of the reward for the elimination of US troops" continues.


The case is strained, as they say, “with a creak”, but the forces that are behind the campaign to unveil and support the new terrible Russophobic lie are clearly not going to lay down their arms. The stakes are too big at stake, the goals and objectives are too large-scale, for the sake of which all this is started. And the speech is far not only on a purely American domestic political agenda. What else?

Do not judge - you will not be under sanctions

At first glance, the scandal with the "paid" by the Taliban by someone to the US Army is not about Russia at all. And not even about Afghanistan. Being, in fact, the official press organ of the US Democratic Party, The New York Times, which has hardly recently released at least one issue in which a bucket of slops would not pour on the country's 45th president, continues to habitually “wet” Donald Trump, increasing efforts in light of the upcoming elections. However, why did this happen right now and why was the “Afghan question” chosen as the next example of “pro-Russian activity” of the head of the White House that the democrats hated? In order to get closer to understanding these points, it is necessary to correlate some of the events that preceded the absurd publication.

This is, first of all, about the decree of Donald Trump of June 11 this year, according to which members of the International Criminal Court (ICC) who dared to conduct any investigations against the US military or prosecute them without the permission of the United States themselves be introduced economic and other sanctions - from blocking assets to a ban on entering a country that was so offended by them. As usual, the ICC in the White House of the ICC was accused of “corruption” and “illegal actions”, as well as of “not carrying out reforms”, as a result of which “it has become the object of manipulation of US states unfriendly”. What specific countries in this case are in mind is deeply incomprehensible. It is very strange if Russia - it, despite the signing of the Rome Statute, participates in the activities of the International Criminal Court only as an observer. Moreover, at the end of 2016, the UN Secretary General was sent a notice signed by Vladimir Putin stating that our country does not intend to expand its cooperation with this organization.

If anyone forgot, the "apple of contention" that led to the conflict between the ICC and the United States was just the question of investigating crimes committed by both the military and the CIA in Afghanistan since 2003. The prosecutor’s office of the International Criminal Court began working in this area back in 2006, and in 2017, its employee Fatu Bensuda asked the judges for permission to conduct official investigative actions that could affect both the Americans and the Taliban. The issue was resolved for a long time, and in 2019, after the United States introduced visa restrictions for all persons who may be involved in this investigation, and then the former White House National Security Advisor John Bolton attacked the ICC with reproaches and threats, the preliminary chamber The proceedings rejected Bensuda's petition on the grounds that the trial in this case allegedly “would not be in the interests of justice”.

However, the stubborn prosecutor did not give up and filed a new submission - this time to the ICC Appeals Chamber. And on March 5 this year, the appeal was granted, and with a unanimous decision of the members of the chamber! The reaction of Donald Trump is described above ... And the point here is not only that the current American leader has considered and stubbornly continues to consider only his own country “great”, therefore even thoughts about what someone can ask from the USA seem wild to him for all that they do in foreign countries and in foreign territories. On the nose are elections that can turn into either an “American maidan” or worse. Trump’s main rival, Joe Biden, has openly called on the military to “pull Trump out of the White House.” So the current president needs the support of the army like air - hence, such a loud “reverence" in her direction.

Motives: a lot of obvious and a little secret

The “deflection”, I must say, was appreciated immediately: before Trump had put an autograph under the decree, the head of the Pentagon Mark Esper immediately jumped out and beat his chest, solemnly swore that not a single valiant American soldier would ever appear before the "enemy" court, which Secretary of State Mike Pompeo has already dubbed "treacherous" and "illegal." Note that the head of the defense department had the conscience to at least not broadcast the "innocence" of his own subordinates. “They will not answer!” and point. Very American ... And this situation, in which the head of the White House looked like a reliable defender and savior of American warriors, needed to be fixed - and, obviously, having received the relevant instructions, The New York Times set to work. To date, no evidence of the allegations made by the publication exists from the word "completely."

With a refutation of the "sensation" have already managed to make all whose interests have somehow been affected. Donald Trump, who is already contorted by any publication on the NYT (and for good reason!), Has traditionally snapped his favorite Twitter. The domestic Foreign Ministry, this time not particularly bothering with the intricacies of diplomatic etiquette, called the fabrications of the NYT authors and the "sources" they referred to as "stuffing" and "nonsense", demonstrating the "low intellectual abilities" of those who thought of such nonsense. Representatives of the Taliban have also disowned “payments for the heads of Americans” on the part of Russian intelligence. Although, it would seem - why should they whitewash Russia's reputation, where is this movement classified as terrorist and prohibited? Just yesterday, finally, the Pentagon representative, the head of the Central Command of the US Armed Forces, General Frank Mackenzie, spoke out on this occasion. Truthfully speaking, his performance leaves a double impression: the high rank either doesn’t say anything, or, on the contrary, tries to “talk” the topic.

Mackenzie confirms the fact that the intelligence community of the United States "really came to the conclusion" that the representatives of our country allegedly "offered the Taliban a reward for the killing of the US military." But then the general is taken frankly, excuse me, "dope": according to him, "there is no evidence that at least one US Army soldier died." “These are disturbing, but I don’t see cause-and-effect relationships ...” - approximately like that. And how to understand this? Did the Russians offer anything? Or did the Taliban disagree? Or they just do not know how to shoot - didn’t they liquidate anyone, having failed the whole thing? The general does not explain anything of this, leaving a lot of space for the next crazy fantasies. But in everything that concerns the “negative role of Russia” in Afghanistan, its eloquence simply has no borders: and the Russian Taliban’s weapons have been supplied for many years, and “have been providing them with financial support,” and generally: “not are friends of America and do not wish her well. " What should they ?! Especially after all that the Americans did in those years when our limited contingent was deployed on Afghan soil ... In a word, his speech, which some people had already hurried to evaluate as a refutation of the nonsense NYT Mackenzie, essentially did not refute anything, but he only let in more fog and added fuel to the fire. It is not surprising that the US Senate has already introduced a bill introducing sanctions against Russian citizens “for conspiring with the Taliban”! The first on the list is the name of Vladimir Putin, which, however, is completely natural. Robert Menendez, of course, was a Democratic senator. They promise to introduce new restrictions as soon as “there is evidence” and something tells us that this will not be the case.

This special operation (and there is not the slightest doubt that we are dealing with it) has, as befits any such project, not one or even two “bottoms”. Yes, the main blow is directed against Trump - if the Democrats manage to persuade the public to believe that he “knew everything, but did nothing,” things may not get to the elections. In this case, the career of the current president may indeed end in impeachment, which raves him political opponents from the moment he crossed the threshold of the White House. There is another point that is extremely important right now. Republican President George W. Bush sent the US Army to Afghanistan. However, holding her there, increasing the contingent, and, quite possibly, covering the numerous war crimes of his compatriots was just a protege of the Democrats, Barack Obama, who was so dear to them. Donald Trump, one cannot but give him credit, the military from this country (and not only from there, by the way) was just trying to withdraw - starting from the moment of assuming the presidential powers. That’s exactly what his opponents are now trying to “cover up”, who are ready to present the poor fellow with even an irresponsible idiot, even with the “Kremlin agent” - just to bring him down.

But this in no way will mean that Trump's successor will open his arms to investigators of the International Criminal Court and allow them to bring to the light of God all the blood and dirt that the American military and, especially, CIA agents left in Afghanistan. Materials there - on the new Nuremberg, at least. Secret prisons and torture centers torn to shreds by peaceful villages and caravans, kidnapping and killing civilians who were not at all involved in the armed confrontation ... For all these “feats”, gallant guys under the star-striped flag “carrying democracy” to the Afghan people , get off, at most, with insignificant official penalties, although according to international laws their deeds are dragged on for huge prison terms. However, from Hudson, as you know, there is no extradition, and the United States in no case can prevent the creation of a precedent, in which representatives of their army and special services will bear real responsibility for their crimes. Moreover, they will be forced to answer many extremely uncomfortable questions for Washington regarding who specifically and what specific orders were given to them. So desperate attempts are being made to “turn the arrows” to Russia, once again exposing it as “world evil” and “sponsor of terrorism”. Then, according to American politicians, the world will forget, for example, that Al-Qaeda, headed by Osama Bin Laden, was created precisely by US intelligence agencies to confront the USSR in Afghanistan. And also the fact that during the period of the Afghan war the USA CIA paid quite real bonuses to the souls for the murder of Soviet soldiers and officers.

The fact that the United States most often blames others precisely for its own sins and crimes has long been known and proven many times.
Reporterin Yandex News
Reporterin Yandex Zen
Information
Dear reader, to leave comments on the publication, you must sign in.