“That which is dead cannot fly”: Ukraine lost its aircraft industry 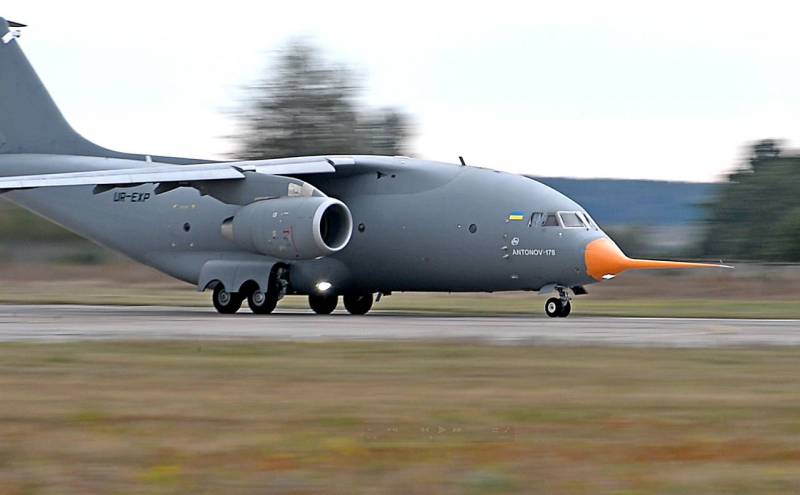 In the last days of June, an extremely intriguing event took place in Kharkov - the first All-Ukrainian Congress of aircraft manufacturers. According to reports, representatives of at least 40 enterprises and companies of the Nezalezhnoye participated in it, one way or another (at least by name) involved in the creation of winged machines. Admittedly, this meeting did not cause much excitement in society, despite the fact that the plans and intentions voiced on it were truly cosmic. Rather, aerospace ...


No wonder one of the local wit journalists noted that the only aerobatics shown in Kharkov by Ukrainian aviators could only be attributed to the field of verbal balancing. Why, if there are dozens of seemingly existing aviation industry facilities in Ukraine today, only its inevitable death can be stated?

And you, friends, no matter how you sit down ...

In fact, everything that happened in the first capital of Ukraine with all the representativeness of the leaders gathered there, to the horror reminded everyone of the famous Krylov's fable. The very one where some representatives of the animal world "started to play a quartet" ... It seems that the words were spoken, mostly correct, and the assessments of the situation in the aircraft industry there were voiced for the most part realistic, and measures to change the situation were proposed, in principle, reasonable. However, all this in general leaves a rather painful impression on itself, which always develops when serious people with a serious look are mistaken for frank boltology, empty and unpromising.

Speaking at the congress, President of Ukraviaprom Association, chairman of the board of Kharkiv FED JSC Viktor Popov said: the root of the problem is that "the country has not had a program to develop the aviation industry for a decade, the industry is completely coordinated." At the same time, according to him, President Vladimir Zelensky and Prime Minister Denis Shmygal “relate to problems with understanding” and even promise to help. But the trouble is that all decisions are “slipping” on the ground due to the bureaucratic system of governance and the corruption interests of individual officials. “We consider it unacceptable when, having established our own production of flying equipment and the aviation industry, our state prefers and subsidizes foreign competitors, ”Mr. Popov emphasized. Is he telling the truth? Of course. That's just not all. Kiev's complete disregard for the more than real prospects for the collapse of the domestic aviation industry and unwillingness to invest at least broken pennies into its development are only half the troubles.

Another serious problem is the inclusion of all enterprises in this industry as part of the notorious for its corruption scandals and, to put it mildly, a very peculiar “managerial policies"State Concern" Ukroboronprom ". In fact, all of any significant companies represented at the Kharkov congress (Motor Sich JSC, Ivchenko-Progress SE, KhGAPP, SE FED Kharkov Machine-Building Plant) have for some time been its structural divisions. It didn’t bring them either state security or prosperity. Rather, on the contrary, it drove into new losses and resulted in constant pressure from the “higher authority”, which is climbing into all issues - from financial to personnel, and trying to solve them solely at its discretion.

Ukroboronprom only pumped out more than 2018 million hryvnias (more than $ 2020 million) of direct “contributions” from the same Antonov state enterprise in 120–4.5, not including the half the amount transferred by the enterprise to other entities included in concern as a "financial aid". And this despite the fact that the mere presence of “Antonov” as part of a purely defense conglomerate is, in fact, an absurdity. Evgeny Morozenko, Chairman of the Board of Dnepropetrovsk Aggregate Plant JSC, did not hesitate to mention this at the congress, expressly stating that “Ukrainian planes are civil aviation: regional passenger airplanes and transport aviation, and they have nothing to do with Ukroboronprom’s field of activity ". In fact, the entire Kharkov gathering of aircraft manufacturers was a kind of secret “rebellion on a ship” (airborne in this case), directed against the bitter radish of the concern, which was sick and tired of everything.

Without Ukroboronprom, you can survive. And without Russia?

Proposed by its participants, interspersed with indispensable “reverence” to Zelensky and other representatives of the supreme authority, proposals for “creating a specialized Ministry of Aircraft Engineering that will implement state policy in this industry”, and, most importantly, will be the manager of budget money that will come in this way to aircraft manufacturers, bypassing the greedy hands of Aivaras Abromavicius and his insatiable "team", the idea, of course, is sound. However, none of the participants found the courage to admit the obvious: the establishment of the next state-bureaucratic structure in no way will solve the most important problem of the Ukrainian aircraft industry: breaking ties with Russia.

From the moment cooperation with Russian colleagues in the field of aircraft manufacturing, the creation of engines and other components for winged vehicles became impossible for enterprises to be “impossible” in principle, their slow extinction turned into a rapid movement towards a complete and final collapse. The main secret of the “Ukrainian aviation industry” is that it never existed as such! This industry and science was one of the integral parts of the “difficult Soviet past” that Ukraine began to get rid of, we will be frank, not in 2014, but in 1991! The factories, design bureaus, research institutes that worked on its territory for aviation and space were, like all similar structures in the USSR, closely integrated into the unified national economic system of a huge country, and only their “Ukrainian genius” can attribute their undoubted achievements to alternatively gifted subjects. Without allies, primarily Russian, without the market of our country and the so-called “post-Soviet” space, all this potential was doomed from the very beginning.

In the same "Antonov" it has long been calculated - to replace the components and assemblies produced in Russia, the share of which in each aircraft manufactured by the enterprise is huge, at least $ 200 million is needed. But this is only half the battle! Firstly, the necessary parts compatible with the completely modified winged machines so that they do not require their complete alteration, you still need to find somewhere abroad. Secondly, all certificates for non-winter landing aircraft were received in the Russian-Ukrainian configuration - start changing something - and you will have to go through all the circles of hell with a lot of tests, re-certification and approval of project documentation . And far from the fact that it will be possible to do. Thirdly, any “import substitution” in the option available “non-fallow”, completely ruining (and in some cases never having) the necessary production cycles, means only one thing - replacing Russian parts with much more expensive analogues made in the West. And this, accordingly, inevitably leads to a rise in price of airplanes at times, which does not suit customers at all - both potential and already had the imprudence to invest in the Ukrainian aviation industry, thus trying to cheapen their own costs. A great example is the story of the Kharkov Aviation Plant.

During 2010-2014, while supplies of components from Russia were available to him, the enterprise somehow “riveted” one An-74T / TK-200 each year, mainly for the needs of the “power” structures of the CIS countries. Since 2015, for the reasons already mentioned above, the production of aircraft ceased completely. Moreover, by concluding a contract worth $ 30 million for the supply of An-74 with the National Guard of Kazakhstan, and even having received half of this amount as an advance payment, Kharkov aircraft manufacturers were not able to fulfill it. Showing truly eastern patience, representatives of the Kazakh side waited until 2017, after which they spat, terminated the contract and demanded that the advance be returned ...

That which is dead cannot fly ...

According to the decision of the Commercial Court of the Kharkov region, sooner or later it will have to be done. Yes, the trouble is there is no money. At the beginning of 2020, according to the State Labor Service of Ukraine, only the debt of the enterprise to its own employees exceeded 220 million hryvnias (about 8 and a half million dollars). His total accounts payable exceeded 3 billion hryvnia in 2018. In order to survive in an elementary way, at the Kharkov Aircraft Building even then they intended to establish the production of tracks for armored tracked vehicles, as well as ... plastic windows! Here it is - the real situation of the Ukrainian aircraft industry.

Gathered at the Kharkov congress, today's and future bankrupts could arbitrarily twist about the “need for state support and orders,” while leaving behind the main question - how do they intend to fulfill these orders even if they are received without “forbidden” details from Russia? You can, of course, establish the Ministry of Aircraft Industry by creating a new feeding trough for all the same thieving and mediocre “post-Maidan” unfortunate officials, but how it will be able to solve the main problems of the industry is completely incomprehensible. Aircraft industry requires not just big, but huge investments, which Ukraine with its crumbling the economy and a leaky budget to take just nowhere.

“Western investors”, whose arrival so long and stubbornly raved about the representatives of the “non-fallow” aviation industry (though they are far from being alone), will not come - now, after a pandemic, the industry’s world flagships are desperately fighting for their own survival and investing in more than dubious "Partners" will not be in any case. Yes and no, even giants such as Boeing or Airbus, today forced to dismiss due to the lack of orders of their employees and reduce their own production, have no money for this. Interest in the remnants of Ukrainian industry, including its aerospace sector, is rapidly losing even the Chinese comrades, who used to get used to buying everything they get there, “a bigger number, cheaper”. Russia?

I will allow myself to assume that Ukrainian aircraft manufacturers are all the more uninteresting in our country, which suddenly turned into “brothers”. Even if a miracle happens tomorrow, abolish Kiev its suicidal restrictions and prohibitions - why should we resuscitate those who doomed themselves to death? To support competitors in the production of well-defined types of aircraft? What else ... You can hold as many congresses as you like, appeal to the authorities, demand support and talk about "industry problems." In fact, the only speeches that are relevant today regarding the aviation industry of Ukraine are tombstones.
Reporterin Yandex News
Reporterin Yandex Zen
8 comments
Information
Dear reader, to leave comments on the publication, you must sign in.