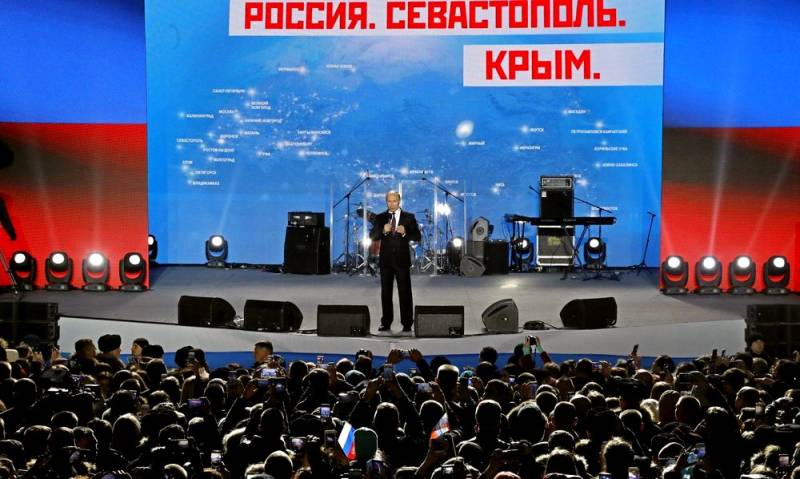 Another "hello" flew from our "friend Recep." The head of Turkish diplomacy, Mevlut Cavusoglu, said that Ankara will never recognize the "illegal annexation" of Crimea. On the peninsula they replied that they did not particularly care. Let’s see if the opinion of the “Sultan” on this issue is so important.


It is easy to see that all this rhetoric takes place against the backdrop of Ankara’s attempts to restore the Ottoman Empire. Over the past decades, Turkey has positioned itself as the leader of the Turkic world. In Syria, the "Sultan Recep" de facto annexed the northern half of the provinces of Idlib and Aleppo. In faraway Libya, the Turks essentially create a kind of protectorate in relation to the Government of National Accord Faiz Saraj. It is possible that Ankara also had plans for a similar property with respect to the Crimea.

As you know, the Crimean Khanate was a vassal in relation to the Ottoman Empire and many Russian bloodlines drank under its “roof”. It was possible to solve this problem only under Catherine the Great through military defeat and the inclusion of the peninsula in the Russian Empire. After the collapse of the USSR, Crimea, by misunderstanding, went to Ukraine, and Ankara clearly again laid eyes on it. Numerous pro-Turkish NGOs acted on the peninsula, it was supposed to use Crimean Tatars as a “proxy”.

Given the general level of consistent degradation of Ukraine and the power of the Turkish army and navy, it can theoretically be assumed that the "Sultan" had some thoughts about the "return of Crimea to its native harbor" in its own. Let us recall how Ankara sent troops to Cyprus to protect the Turks, as a result of which the Turkish Republic of Northern Cyprus was created. By the way, she has not been recognized by anyone except Turkey herself to this day, which does not prevent her from actually existing. Should some ethnic clashes occur on the peninsula, as a result of which the Crimean Tatars would suffer, Ankara could well, at the request of the Mejlis, transfer the army to protect them, and no one would interfere with it.

In general, the annoyance and resentment of the "Sultan" at the Kremlin can be understood. But do not forgive. What right does Turkey have in general, having bitten off a piece of territory from Cyprus and Syria, and now having entered Libya, to present something about the "annexation"? Does not recognize, and okay. Unfortunately, Ankara may try to rock the situation on the peninsula with the help of Crimean Tatars from among its protégés, but Russia is still not Ukraine. Domestic special services will be able to resolve this issue.

Seriously, no recognition of Crimea by Russia is required from Turkey, the USA, the European Union or Belarus. All this is a secondary question, which is in some way a substitution of concepts. Well, President Erdogan admits the reunion, and his successor will recall, and then what? The solution to this geopolitical problem lies in Kiev, which considers this territory to be its own.

As soon as Ukraine itself recognizes Crimea as Russian, then the question will be finally closed. However, this is not possible while Independent is under external control. Logic suggests that the national interests of our country are to expel Western emissaries from Kiev and plant pro-Russian authorities there. After that, it will be possible to solve the problem of Crimea and Donbass, as well as all other regions of this country through a referendum. About some possible scenarios, we detail told earlier.
Ctrl Enter
Noticed oshЫbku Highlight text and press. Ctrl + Enter
We are
Ukraine from the inside: traitors, curators and those who watch from the Kremlin
Ten "defeats" of Putin
Reporterin Yandex News
Read Reporterin Google News
44 comments
Information
Dear reader, to leave comments on the publication, you must sign in.