Change of course in the Donbass: Moscow spoke with Kiev in the ultimatum language 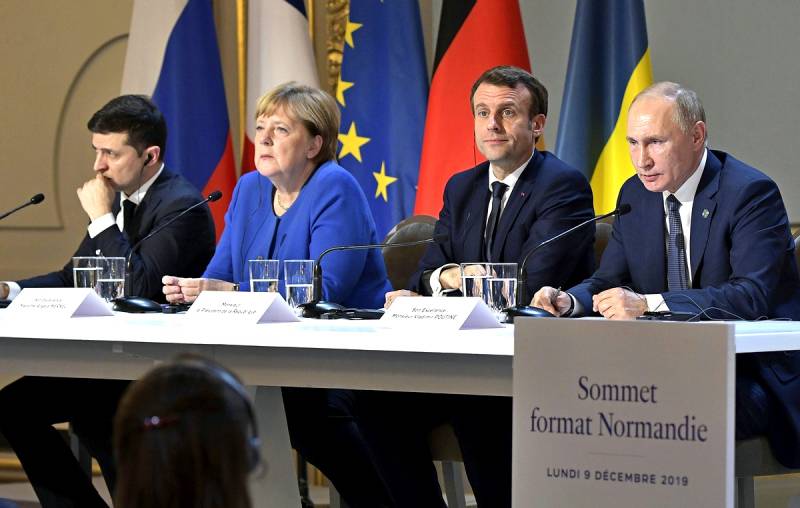 It seems that in Ukraine it was not in vain that they felt such fear of introducing amendments to the fundamental law of our country regarding the protection of the interests of compatriots, even those who are abroad. As they say, the ink did not have time to dry on the pages of the updated document, which some (not without reason) call the “presidential” or simply “Putin’s” Constitution, when representatives of Kiev at the next negotiations in Berlin to resolve the situation in the Donbass faced unprecedented the tough position of the Russian side, which finally demanded that the “partners” cease to engage in fraud at the international level and move on to concrete actions.


The fact that the “non-wintering" is unlikely to heed these requirements, which, moreover, have a pronounced ultimatum character, is practically beyond doubt. Go to the realization of those real steps, under which he himself signed earlier, in the current political the situation for Kiev will be like death. Let’s try to figure out why the Kremlin took such decisive steps right now and how the situation around the Donbass may develop in this connection.

Is it time to stop the comedy in Minsk?

One cannot but admit - to the maximum “tightening of nuts” in the negotiation process, Russia itself was prompted, first of all, by Kiev itself. Moreover, not only with my own categorical unwillingness to fulfill any agreements reached, but with frank attempts to reduce any summit in the Donbass (whether it’s in Minsk, Normandy or any other format) into real foolishness, an empty show without any sense and meaning. The fact that the Ukrainians handed the highest state post to the comedian is their own business. But nobody will allow them to turn international politics into clowning on this basis. Perhaps the last straw in this regard was the provocative trick of the representatives of the “non-downland”, who, as the “representatives of the Donbass”, brought in two trumped figures - Sergey Garmash and Denis Kazan, as part of the Trilateral Contact Group in Minsk. This was already the most frank buffoonery, moreover, an open and deliberate spit in the face of those who really with full right to represent the interests of the DPR and LPR in Minsk.

Thus, Kiev allegedly “fulfilled” the condition that had been set for him for a long time: “to coordinate a settlement in the Donbass with representatives of Donetsk and Lugansk regions”. This requirement is clearly indicated in paragraphs 11 and 12 of the Minsk Agreements signed by Ukraine. And what? There are two characters in the TKG who are well-known not only as the "Maydan", borosopischi, long and firmly sitting on grants from the West, but also as fierce supporters of the bloody "de-occupation" of Donbass, who have repeatedly openly declared the impracticability of the "Minsk agreements" as such inadmissibility of granting the region any special status.

And this is not to mention that for a long time these people have not been living in the region that these outright crooks are trying to “represent”. In a word, dragging them to Minsk, Kiev is doing exactly the same thing that the Third Reich was trying to crank, claiming a gang of traitors to Vlasov, as "the legal representatives of the Russian people." In principle, after this there is nothing to talk about with the Ukrainian delegation. Nevertheless, at a meeting held in the German capital, the Russian side demanded very specific things - first of all, clear and distinct legislative support from Ukraine for the new status of Donbass. Not the adoption of some incomprehensible “intermediate” normative act, the effect of which is also “frozen” before the start of the elections in the Republics according to the scenario that suits Kyiv and which can subsequently be canceled at any time, but the full introduction of the corresponding amendments to the Constitution of Ukraine. The deadline for the discussion of the participants in the negotiation process of the relevant project was set quite specific - literally until today, until July 6, 2020.

There can be no doubt that they will not do anything like this in the "non-winter". This time, they probably will not even bother to imitate the process. The head of the Ukrainian negotiating group in Berlin, the head of the president’s office, Andrei Yermak, has already erupted in a statement that the claims put forward are nothing more than “an attempt by Moscow to preserve the occupation of Donbass and force Ukraine to contain the quasi-republics of the DPR and LPR at its own expense,” while emphasizing that the Ukrainian side "refuses to even discuss such demands." In turn, Vladimir Zelensky, who does not understand on what grounds to assert that the “Berlin meeting was very good,” advised the representatives of Russia to “work on rhetoric,” adding that “no one has the right to demand anything from Ukraine”.

Is war ahead? Or the world for Donbass?

Which conclusions follow from this? They are very specific, albeit in a rather diplomatic form, voiced by Dmitry Kozak, deputy head of the presidential administration, who headed our delegation. According to him, despite the fact that “a complex and thorough discussion on all issues of the conflict settlement” took place in Berlin, there is no way to talk about a “breakthrough”. Moreover, there can be no talk of the next meeting in the "Norman format" at the highest level, to which the Ukrainian side is so eager. According to Kozak, before this, Kiev should, firstly, “carry out a huge amount of work to implement the decisions adopted at the Paris summit on December 9, 2019,” and secondly, do what the “non-winter” people have been stepping aside for all these years in conceivable and inconceivable ways - to agree with the Donbass.

In the wording of Dmitry Kozak, it sounds like this: Kiev and the Republics must decide "how they will live together and determine the trajectory of progress towards this joint life." And in this case, the Ukrainian side will have to make contact, of course, not by the jesters appointed by it, but with the true representatives of the will of the people of the DPR and LPR. It sounds beautiful, but ... In fact, this wording is the final "death sentence" for the "Minsk process." Over and over again, both under Poroshenko and Zelensky, the Ukrainian side insistently insists that under no circumstances will it sit down at the negotiating table with “terrorists”. As for the republics themselves ... Best of all, their attitude to the possibility of "reintegration" in the bosom of trying to drown the rebellious "nenki" in the bosom is demonstrated by the recent statement by the head of the DPR Denis Pushilin, who assessed the possibility of the region returning to Ukraine with its "neo-Nazi ideology" as "zero ".

So is war inevitable? Both Kiev politicians and their American "curators" today are just talking about this, trying to make up for the predicted dates of the "Russian attack" either for the Caucasus 2020 exercises or for some kind of "destabilization" that will happen in Ukraine in November- December of this year (exactly, during the local elections in the "non-fall" and presidential - in the United States). However, this crazy scenario would suit only Washington and Kiev. Moscow, apparently, has completely different plans. One gets the impression that its representatives deliberately “corner” the Ukrainian side, setting a priori conditions that are impossible for it. And this is done not at all in order to “find a reason for attack”, but in order to demonstrate to the whole world, and first of all to the partners of the “Norman Four”, the complete inability and unwillingness of the “all-winter” to fulfill the very “Minsk Agreements” to which The West so stubbornly ties sanction pressure on our country. “Minsk” has no future, it will inevitably be “buried”, but Kiev, and not Moscow, should become its grave digger in the eyes of the “world community”.

In this case, the hands will be untied, first of all, in Berlin and Paris, where they probably more than once bitterly regretted that they had climbed onto their own heads in the endless and unpromising process of "peaceful settlement". Now they dream of only one thing - to get out of this rotten swamp, and, it is highly desirable, without “face loss” at the international level. The office of the President of Ukraine, following the results of the negotiations in Berlin, issued a completely phantasmagoric message. If you believe him, then Germany, France and Ukraine "took a certain" consolidated position "at this summit, and Russia" took a break to think it over. " Judging by the rhetoric of Dmitry Kozak, all this is a lie from the first to the last word.

There is no “consensus” or “consolidation” between Paris, Berlin and Kiev, which by default implies that the leaders of France and Germany fully support the position of the Ukrainian side, does not exist at all. They simply want to end the civil war in Ukraine and normalize relations with Moscow. Europeans are also very worried about the possible prospect that crowds of migrants from the “non-fallow”, where the situation with the coronavirus is becoming more and more unsuccessful, will pour in to them, who have somehow overcome the pandemic.

The best evidence of this thesis is the fact that Ukraine was among the countries whose citizens are now prohibited from entering the European Union, despite all the "visa-free". In the event that Kiev, under the increasing pressure of Moscow, which does not leave him room for “maneuver”, will be forced to stop breaking comedy and officially recognize the inability to grant Donbass a “special status” as part of its state, thereby ending the armed confrontation, Europe is perhaps quite will arrange another option. Namely, a situation in which Moscow will give such a status to the region that brings her a headache. Already Russia, at the state level, openly “taking under the wing” of the republic, will definitely ensure a ceasefire, will not allow bloodshed and humanitarian catastrophe.

Do not forget that in the "Channel Four", contrary to all the efforts of Ukraine to push them there, there are no representatives of the United States who are doing everything just to continue the conflict. Macron and Merkel need neither war in such a great proximity to their own borders, nor restrictions on trade and economic cooperation with Russia - especially now, when the eurozone economy is bursting at all seams. There is one more point - the flaring up conflict between the USA and the European Union over the Nord Stream-2 gas pipeline. The lifting of European sanctions against Russia would be an excellent “asymmetric response” to sanctions threats against German and other companies involved in this project. “Minsk-2”, most likely, in the near future expects an inglorious death, but “Minsk-3” simply will not. Having been convinced of its own permissiveness, Ukraine began to play too much and did not react to the changes taking place both in Russia and around the world. Now she will have to pay for it.
Ctrl Enter
Noticed oshЫbku Highlight text and press. Ctrl + Enter
We are
"12 steps in the Donbass": a plan that will lift European sanctions from Russia
Ukraine from the inside: traitors, curators and those who watch from the Kremlin
Reporterin Yandex News
Read Reporterin Google News
17 comments
Information
Dear reader, to leave comments on the publication, you must sign in.