"Ready to stop the attack": why Kiev is waiting for a large-scale invasion of Russia 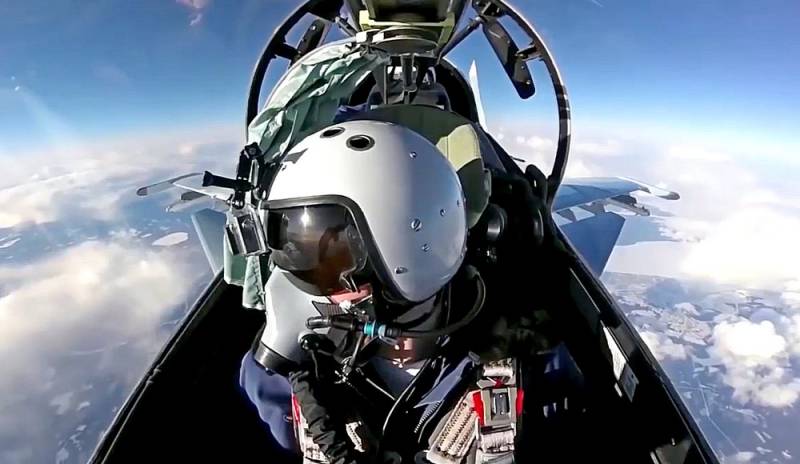 In Ukraine, they started talking with might and main about the allegedly preparing full-fledged offensive of the Russian army in the near future - this time on its southern borders. They are trying to reconcile similar forecasts in Kiev both with the upcoming exercises of the Armed Forces of Russia and its allies in the CSTO Caucasus 2020, and with the regularly aggravating problem of water supplies to Crimea, which, according to the officials, is “uncovered” and some “military experts, ”Moscow intends to decide in this way.


Nevertheless, it can be seen with the naked eye that completely ridiculous attempts to “advance” to accuse our country of starting a war are based on completely different reasons and motives. Let's try to figure out which ones.

Do Russian wars want to happen?

Not so long ago, informational stuffings were a completely integral part of the Russophobic “informational background” constantly generated by the “groundless”, and became boring to everyone so much that they almost stopped responding to them. With the coming to power of Zelensky and his team, the flow of alarmist statements somewhat dried up - peculiar cries: “Russians are coming!” habitually continued to publish except the former head of this body, Turchinov, who had wandered around the NSDC building dejectedly from there. They were echoed by the most persistent “fighters” of the Poroshenko party, whom the “little green men”, for some reason, seem to be everywhere and always. Now, with panic and overtly provocative “warnings,” they are not at all political marginals, and senior government officials - both civilian and military.

The tone was set by the Deputy Foreign Minister of Ukraine Vasyl Bodnar, who profoundly proclaimed that his compatriots need to be "mentally prepared" for an attack by Russia, which "will not stop before using military force to achieve its own political or economic goals ". At the same time, a high-ranking Ukrainian diplomat directly pointed out that in Kiev they see the threat of a "transition into the phase of active hostilities" of the strategic command-staff exercises "Caucasus-2020", which the head of the domestic defense department Sergei Shoigu called last year "the most important military event. training of the Russian army ”. The main events of these maneuvers will unfold on the territory of the Southern Military District, including in Crimea, in September this year, but large-scale preparatory measures within their framework should start in July.

It was on this basis that the representative of the Main Directorate of Intelligence of the Ministry of Defense of Ukraine Vadim Skibitsky made a statement according to which the military leadership "nezalezhnoy" sees the "actual military threat" in the upcoming exercises, since they are associated with "building up near the state border of Ukraine a group of troops with a powerful shock and offensive potential. " Of course, any large-scale maneuvers, especially carried out by the state, a priori recorded as "probable opponents", do not add optimism and relaxation to the neighboring countries. The same "Defender of Europe 2020", announced by NATO as the most ambitious militaristic games on the western borders of Russia, held in the entire history of the Alliance, did not cause the slightest positive emotions in Moscow.

However, it’s peremptory to speak of a “forthcoming invasion” only because of the next combat training of the troops — this is already a bust. Moreover, the same “Caucasus”, in which, by the way, at least 120 thousand servicemen of the Russian army were involved, was carried out, for example, in 2016 - and no war happened. But the relations between Kiev and Moscow at that time were, let’s say, far from friendly, and the problem of supplying water to the Crimea already existed in all its relevance. However, no one began to either “attack” or “seize” anything; everything was done with the planned activities. So why would our country act differently now? At first glance, the logic in the statements of the representatives of Kiev is completely absent. And, nevertheless, it is - that's just quite peculiar.

Is it the amendment of the Constitution of Russia?

No matter how paradoxical this assumption may seem at first glance, it has a right to life. It should be noted that in Kiev the voting on the fateful amendments to the basic law of Russia was followed with no less and, as it were, not more attention than in some places in our country. The reasons are more than obvious. It's not a secret for anyone that one of the completely undisguised and carefully cherished local local "national-patriots", as well as other Russophobes of all stripes of hopes, was the hope that sooner or later (and, of course, better sooner than later! ) our country will suffer a very sad fate. In this case, different scenarios were invented (one more delusional than the other) - from the "collapse of the economy due to the fall in oil prices" and subsequent "food riots" to "a radical change of power", either as a result of the "Maidan" in Moscow, or by " the Kremlin coup ".

Further, dreamers from the “unfathomable” country saw the “democratization” of Russia (that is, its transition under the external control of the West) and, accordingly, the “change in foreign policy” of Moscow. It was then, they hoped, that the Russians and Crimea would give as dear, and with a considerable surcharge, and the Donbass could be “de-occupied” by drowning it in blood. Naturally, such sweet dreams were associated, first of all, with one point - the departure from the top of the domestic power of Vladimir Putin. And now, when even the preliminary results of the referendum extremely convincingly demonstrate that the majority of Russians supported the proposed amendments to the Constitution, all these hopes and dreams were shattered in the most ruthless way. In small splashes and rattles ...

Putin is not going anywhere. “Maidan”, destroying their own country, the Russians, though far from being completely satisfied with their own power, categorically do not intend to. The domestic "opposition" has once again demonstrated its utter ridiculousness and incapacity. Moreover, in accordance with the legislative changes that have already been adopted, the situation for that part of the Ukrainian “patriots” who raved almost yellow-black flags over Red Square turns into some kind of really bad side. The amendment on the inadmissibility of the separation of any parts of the Russian territory finally "closes the question" in the Crimea. The constitutionally determined intentions “to assist compatriots abroad in upholding their interests” make it clear that it is better not to try to reach Kiev punishers in the Donbass. The declaration of the primacy of Russia's interests over various “decisions of international bodies and organizations” also sounds a verdict for Ukraine. After all, it was accustomed to appealing to “support of the world community” there starting in 2014, exploiting and monetizing this very support more than successfully.

For Moscow, it’s a sin to hide, the position of the “Western partners” of Kiev has more than once become a deterrent in situations where it is possible and necessary to deal with the “unfettered” much tougher than it was done in reality. Will this continue? In Kiev, they do not know the answer to this question, and therefore many people there are very uncomfortable and even scary. Hence the new attempt to fan hysteria around the "impending Russian invasion." On the one hand, as they say there, it is perhaps better to “raise the high” in advance. Just in case ... On the other hand, this way the reaction of the West is probably checked - will they rush to save? Well, maybe just in words ?!

So far, the only “moral support” received by the Ukrainian side from overseas “allies” can, albeit with a stretch of the imagination, be considered a speech on the state-run Ukrainian television channel Dom, which was created specifically for conducting propaganda in the territories of the former US forces commander outside of Kiev Ben Hodges. This multi-star general (who, however, is now in retirement status) directly stated that he “has a vision” regarding Russia's upcoming “seizure of a dam in Kherson with the aim of resuming water supply to the Crimea.” In his opinion, the Russians only pretend that they are going to conduct exercises - but in fact, they will “announce a humanitarian crisis” on the peninsula, yes, they’ll attack! Right word, it seems that both the Ukrainian diplomat and the American general in the process of their anti-Russian information demarches (almost coinciding in time), as they say, were read from the same cheat sheet. What does this indicate? First of all, that Kiev, at the suggestion of its foreign masters, intends to continue to use the “Crimean issue”, and, in particular, difficulties in supplying the peninsula with water for blackmailing Russia. The same Foreign Minister of the Nezalezhnoy mentioned above, Vasily Bodnar, reporting on the “upcoming invasion”, clearly and clearly specified: “We made a decision - water cannot be supplied to the Crimea before its de-occupation”. Moreover, in the event that our country takes any adequate retaliatory measures, they will immediately be declared a "manifestation of aggression", and will become an occasion, at least, to introduce new sanctions.

At the same time, well aware that in the new conditions that are developing after a significant political reformatting of Russia, they may well cease to stand on ceremony in the event of further provocative antics, Kiev is already trying to take the position of an “innocent victim”, counting on if not help, then at least for the sympathy of the West. By and large, besides this, there is simply nothing to hope for either the local politicians or the local military. In this sense, the peppy relationship of a certain Ukrainian “military expert” with the dearest little Taras Chmut looks very indicative. This leader, who, among other things, is the head of a resource called “Ukrainian Military Portal”, made a statement that the “uncoupled” army “is absolutely ready to stop the Russian attack from the sea and land.” According to the "expert", the Armed Forces in this area already has a whole brigade of marines and an artillery regiment, which is armed with "Hyacinths", "Hurricanes" and "Grads". As well as "helicopters, bombers and fighters" (it is not clear, however, which ones, in what quantity and to what degree of combat readiness). Moreover, as Pan Chmut discouragedly admits, “the Neptune anti-ship missile system is not yet ready for use in combat conditions and will not be ready in the near future” ...

Against the well-known forces and means of the Southern Military District alone, with its air divisions, Iskander and special forces units, which in number exceed almost the entire Ukrainian army, it certainly looks formidable. So it would be better for all to stop arranging tantrums and provocations, and instead quietly rejoice that all this power threatens her exclusively in the delusional fantasies of her own politicians.
Ctrl Enter
Noticed oshЫbku Highlight text and press. Ctrl + Enter
We are
Ukraine from the inside: traitors, curators and those who watch from the Kremlin
Ten "defeats" of Putin
Reporterin Yandex News
Read Reporterin Google News
6 comments
Information
Dear reader, to leave comments on the publication, you must sign in.