US Air Force will set up arsenals against Russia 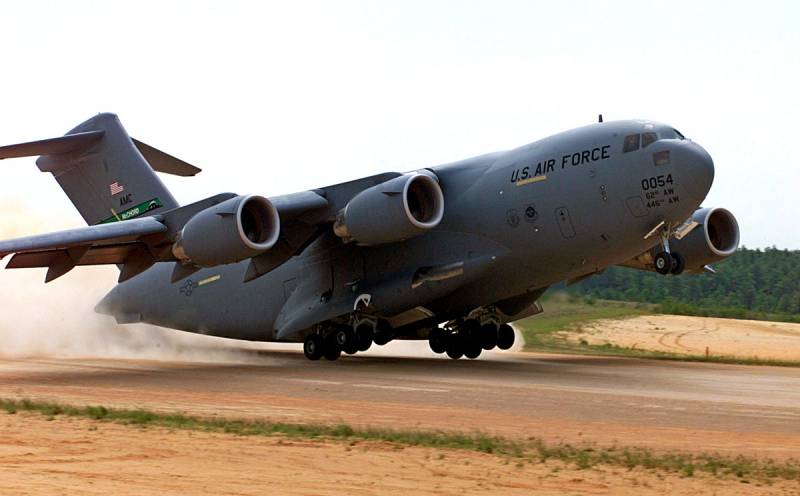 According to Flight Global, the US Air Force intends to return to the concept of creating the so-called "arsenal aircraft", to the eyeballs stuffed with airborne cruise missiles and capable of operating outside the radius of the enemy’s air defense. The most interesting thing is that it can be made on the basis of a simple military transporter and, in all seriousness, is considered as an alternative to the promising “strategist” Northrop Grumman B-21 Raider.


As noted by the American media, such non-standard solutions are a response to the growing capabilities of China and the Russian Federation. The Pentagon believes:

The massive supply of unconventional platforms for delivering weapons to the air forces is one of the possible options for providing unrivaled firepower, which can play a decisive role in future armed conflicts.
The idea of ​​using a transport aircraft as a bomber is not new in itself. For example, during the Vietnam War, the C-130 Hercules dropped heavy BLU-82 volumetric explosion bombs weighing almost 7 tons, destroying everything hundreds of meters in the district, to the partisans. The US Air Force remembers this “valuable experience”, so they created and successfully tested a new system called CLEAVER (Cargo Launch Expendable Air Vehicles with Extended Range). Thanks to her, various types of adjustable ammunition can be dropped from the MC-130J Commando II.

But bombing the Vietnamese is one thing, and Russia and China, which have modern air defense systems, is another. All Hercules will simply be shot down before they reach the discharge zone. To solve this problem, the US Air Force plans to get planes equipped with a large number of air-based cruise missiles capable of operating outside the zone of destruction of the air defense system. And this idea is also not new.

In the seventies, when the B-1 supersonic bomber was created, a much less expensive option was considered. On the basis of the Boeing 747 airliner, a cruise missile carrier aircraft could be created. The project was called CMCA (Cruise Missile Carrier Aircraft). For comparison, he could take on board up to 72 cruise missiles against 20 at the B-1. Moreover, his flight range was much higher than the “strategist”, and the cost of maintenance was much less.

The head of the Pentagon, Harold Brown, in 1979 declared:

I believe that cruise missile launch vehicles offer a reasonable option for quickly building up our strategic capabilities if necessary. On this basis, the Air Force is completing research on the definition of a concept / system based on a review of both military and civilian aircraft.
However, then this project was successfully buried in favor of the B-1 bomber, whose program cost over $ 20 billion. Now the US Air Force faces the same dilemma. The new strategic bomber B-21 Raider will cost the Pentagon $ 500-550 million apiece. Not surprisingly, the question of more affordable alternatives is raised again. Already existing Lockheed Martin C-130 or Boeing C-17 military transporters are considered as a potential re-equipment platform.

Most likely, Washington will decide to adopt both the ultra-modern "Raider" and the "arsenal aircraft" in order to increase its firepower in the air. For the ministries of defense of Russia and China, this means an additional headache.
Reporterin Yandex News
Reporterin Yandex Zen
4 comments
Information
Dear reader, to leave comments on the publication, you must sign in.