Chance for Russia: China creates the largest oil buyer in the world 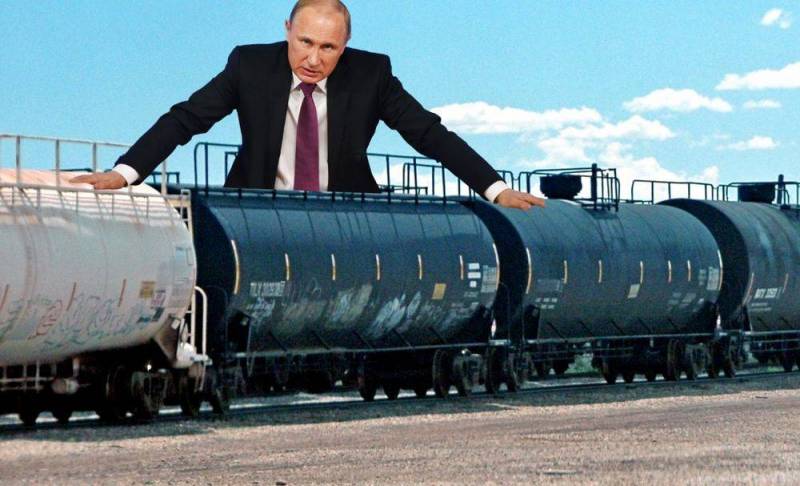 Passions, heated up to the limit in spring, around world prices for “black gold” have recently somewhat diminished. Quotes per barrel are on average at over 40 dollars and in most countries, economy which are more or less rigidly “tied” to energy exports, humbly pray that it will not get worse. At the same time, of course, secretly dreaming of a new price increase.


However, there is reason to believe that the current lull will soon end and the “great oil redistribution” will continue with renewed vigor. To whom and what are the impending changes? Let's try to figure it out.

USA: the patient is more likely dead than alive ...

More recently, among the American "shale" there was a sharp recovery, reaching almost the hype. Among local economic analysts, an intense discussion of rumors began that the United States oil industry, which had collapsed below all conceivable and unimaginable limits, was “just about to” revive like a phoenix from the ashes, but also “will begin a new expansion into world energy markets”. The same Primary Vision predicted that by the end of June the level of production could increase by half a million barrels per day. The Norwegian Rystad Energy, demonstrating Nordic restraint, spoke of a daily “plus” of 400 thousand barrels. Such enchanting forecasts looked somewhat ridiculous against the background of more than sad realities - according to estimates of the US Department of Energy, which is not inclined to excessive optimism, in mid-July the volume of “black gold” in the country set another anti-record, falling to 10.5 million barrels per day, which is the most low since spring 2018. In total, since the beginning of 2020, the level of oil production has declined by 2.5 million barrels per day, of which one and a half million are just “shale”, which at the beginning of June hardly produced about 7.7 million barrels per day.

The blow that came precisely in this segment of the industry can be considered the most devastating. Of the 700 fracking rigs to date, two hundred are still alive, that is, less than a third of them work. Nevertheless, as soon as the price of the oil barrel approached $ 40, some of the "shale" had their hands combed immediately. The same CEO of one of the industry’s most significant companies, Devon Energy Corp, David Hager didn’t just say that if quotes do not fall below $ 30, “there will be no new reductions.” He proclaimed that the American "shale" is determined to "regain everything" and re-enter the world markets, "filling them with oil flows from the United States." One must be a very alternative gifted person in order not to understand what kind of result such expansion can lead to in the current, barely relatively relatively stabilized situation. However, panic in this regard, perhaps, is not worth it. Unhealthy ambition is one thing, and life is another. In reality, Chesapeake Energy, one of the “pioneers” in the production of shale oil, became aware of bankruptcy the day before. Its shares on the New York Stock Exchange for the six months have fallen from 180-odd dollars to 12. Debts totaled $ 7 billion. And the lenders agreed to invest no more than 925 million in the business ... Most likely, the whole "shale" industry, which is completely unable to exist without constant financial investments from outside, expects the same situation.

Acting as the main opponent of Russia during the “oil war” that broke out this year, Saudi Arabia, apparently, made very solid conclusions from everything that followed its reckless actions in the process of this battle. There will be no more "attraction of unprecedented generosity" from the sheikhs. Quite the opposite - Riyadh has already announced an increase in export prices for "black gold" in July by an average of $ 6-7 per barrel. This significantly exceeds expert expectations, according to which Saudi oil should have risen in price by a maximum of $ 4. At the same time, the kingdom will reduce the supply by 10-40%, primarily to Asian markets, to South Korea and Japan. And this despite the fact that, according to data provided by the Main Statistical Bureau of the kingdom, only in the first quarter of this year, oil exports from the country in monetary terms have already fallen by almost a quarter. And the point here is not only in its "depreciation", but also in the reduction of the physical quantity of "black gold" exported from the country. “They are not going to step on the same rake”, which they clearly are not going to spring there - after all, even the neighbors traditionally supporting the Saudis today consider them to be the culprits of that price collapse, the consequences of which the whole Middle East and not only it still perceives.

In particular, that the attempt to redistribute the energy market in their favor using dumping was a “big mistake” by Riyadh, the Minister of Energy of Qatar openly said recently. However, in the kingdom and without observers from the outside, they can clearly see what the risky escapades cost - the expected annual reduction in GDP is estimated at 3.5%, and the country, which has not got used to denying anything to itself, has to mercilessly cut it off lively. The value added tax has been almost tripled, social payments have been significantly reduced, the total sequestration of the budget revenues amounted to almost $ 27 billion. It got to the point that even defense programs are now at risk, for which Riyadh has not been stingy in recent years - arms purchases in the United States alone from 2017 to 2027 should have been carried out for astronomical amounts of hundreds of billions of dollars. The implementation of the ambitious Vision 2030 program was also called into question, the main goal of which is to overcome the situation when the state’s economy is almost completely dependent on oil exports. Saudi Arabia will not make any “sudden movements” that can again rock, or even send the barely afloat “boat”, which now contains all the states for which the price of a barrel is the basis of stability and welfare.

As for our country, the fall in the price of "black gold" by 45% since the beginning of this year, of course, could not but affect its budget. Hundreds of billions of rubles of damage has already been done to him, and this may not be the end of trouble. Nevertheless, the most pessimistic forecasts such as “the collapse of the economy”, “one hundred dollars” and the like, fortunately, did not come true. Anyway, bye. Moreover, some in the country already allow us to talk about fairly good prospects for the future. So, the head of Sberbank of Russia, German Gref, announced on the eve that instead of the initially expected fall in GDP by 6, or even all 9%, today we can say that this unpleasant figure will be half as much - 4.5% maximum. Moreover, the banker is confident that our national currency will strengthen by 10% by the end of the year and the dollar will cost no more than 60 rubles. All this will become possible with the increase in the price of a barrel of Brent to $ 60, which Gref expects, relying, according to him, on the forecasts of "serious and experienced analysts." All this, of course, could be attributed to the desire, inherent in some of our compatriots, to present the situation in a better light than is actually the case, and the tendency to some kind of "hatred" (which, however, just Mr. Gref does not suffer), if not one more news.

Almost simultaneously with the optimistic statements of the head of Sberbank, the news was heard that in the very near future a new major "player" would appear on the world energy market, capable of more than significantly influencing the situation on a global scale. We are talking about the creation of such leading Chinese importing companies of "black gold" as China Petroleum & Chemical Corp. (Sinopec), Sinochem, PetroChina and China National Offshore Oil Corporation (CNOOC) industrial group for joint energy procurement. Taking into account the fact that the total volume of oil imported into the Celestial Empire by the potential participants of this conglomerate is already estimated at 5 million barrels daily, we can safely speak of the appearance of the world's largest buyer of this raw material, which is quite capable of playing a decisive role in the industry market. At the same time, according to available data, the first deal to be planned by the new association will be the purchase of Russian oil produced in Siberia. The group members, as far as is known, have already passed all the necessary regulatory procedures and received the approval and support of Beijing, intend to submit an application for its delivery via the Eastern Siberia - Pacific Ocean (ESPO) pipeline literally next month.

It is precisely because of this that the data regarding the fact that Russia has sold a record small amount of oil in the last month or two since the year 2003 is not so deplorable. This is unpleasant, of course, but quite predictable. According to estimates of the head of the European Central Bank Cristina Lagarde, the decline in the eurozone economy could reach a figure of 15%. What purchases are there? If our "black gold" right now succeeds in realizing its chance and firmly gaining a foothold in the Asian markets, it will be much more profitable and promising both in the short and long term. According to analysts at JP Morgan, by the fall of 9 barrels of world oil consumption by autumn 2021 should return to the pre-crisis level of 100 million barrels daily.

The question is which of the exporters will come to this moment with the least losses and will be ready to occupy the "space" freed up in the markets. It is unlikely that it will be the Americans - the local smart people from Goldman Sachs, for example, believe that the "shale" will not recover from the damage suffered. And analysts from the American law firm Haynes & Boone are confident that even a price above $ 30 per barrel will no longer save the case, and the number of bankrupt companies in this industry will exceed 2021 by 170. Representatives of JP Morgan are "betting" on Saudi Arabia of what they consider to be the country "with the lowest production costs and the best reserves," and predict Riyadh a 15% share of the global market by 2025. Perhaps it will be so, perhaps not. However, in any case, Russia's chances in the current situation do not look too bad either.
Ctrl Enter
Noticed oshЫbku Highlight text and press. Ctrl + Enter
We are
To deceive everyone: the USA played a great game against oil
Peace enforcement operation. Russia inflicts a preemptive strike on Kiev
Reporterin Yandex News
Read Reporterin Google News
22 comments
Information
Dear reader, to leave comments on the publication, you must sign in.