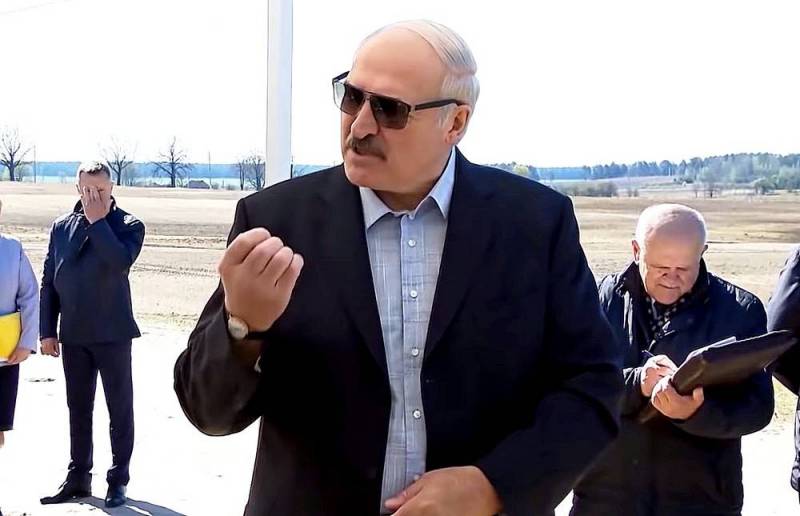 Allied Belarus stood at a crossroads. This August will decide where Minsk will go: to the West, along the path of "European integration", or to the East, to integration with Russia. President Lukashenko himself practically did not leave a chance to remain neutral, playing on contradictions.


For the first time in 26 years of unchallenged rule, the possibility of Alexander Grigoryevich being re-elected is being put into real doubt, and, with all due respect, he is to blame for this. Too many "red lines" have been crossed, too much is said of what was not worth publicly speaking. The rating of the Belarusian president, according to Western media, fell below 50%. In Belarus itself, it is considered equal to 3%. The ill-wishers came up with the head of state the nickname "a mustachioed cockroach", which personally hurt him.

Unfortunately, all this does not happen out of the blue. For decades, Minsk played quite successfully on the contradictions between Russia and the West, as far as possible “milking” both sides, but now this scheme has stopped working. On the one hand, President Lukashenko broke pots with Moscow, deliberately failing to fulfill the integration agreements within the Union State with Russia. As a result, the Kremlin began to hold policies to remove Belarus from the Russian oil and gas needle. It painfully affected her the economy, and the existing problems were exacerbated by the coronavirus pandemic.

On the other hand, moving to the West is also not an option for Minsk. Before my eyes there is a clear example of "European integration" in the face of the neighboring Baltic countries and rapidly impoverished and depopulating Ukraine. Alexander Grigoryevich himself is not expected in the EU, which was recently hinted at by the respected German publication DW, which published a publication on the political killings of oppositionists in Belarus. It can be assumed that at some point all the dirt will be pulled out. At the same time, Minsk itself allowed to dig a hole for itself, having launched numerous foreign NGOs into the country, which now complains about the results of its activities, looking for the roots of a conspiracy against itself in Poland and Russia.

President Lukashenko managed to awkwardly insult all Russians in an awkward phrase, saying:

I already said rudely once: we ourselves are Russians. It is impossible to push us together. Belarus is a Russian with a quality mark.

Here, it seems, he boasted of our unity, but it turned out that the Russian Russians were “lower in quality” than the Belarusian. Perhaps this is just an unfortunate expression, but still an unpleasant sediment remained. And now, with all this baggage of problems, Alexander Grigoryevich goes to the next presidential election. There are three main options for further developments.

Scenario One. Lukashenko re-elected, opposition protests pressed by security forces. Voting results are recognized both in Russia and in the West. Everything continues in the same vein as it was before. This is probably the most preferred option for Belarusians. But there are other scenarios.

Elections are being held, but their results are disputed. Protesters take to the streets, and security officials are in no hurry to disperse them. Activists release candidate Barabiko from prison and demolish Lukashenka’s regime, while the president himself flees the country, like Yanukovych once. And then everything will depend on whose person Victor Barabiko is.

In the second scenario, Minsk is led by a pro-Russian protege, and Lukashenko takes refuge in the West, where the election results are not recognized. In this case, Barabiko, as the “agent of the Kremlin”, pursues a policy of integrating Belarus into the Union State with Russia. But for this we will most likely receive another portion of sanctions. In the third scenario, Barabiko is a pro-Western candidate, and then everything develops according to the Ukrainian scenario. President Lukashenko is fleeing to Russia, and everything will depend on whether the Kremlin has learned at least some lessons from the 2014 Maidan.

If not, he will recognize Barabiko as “the best choice of the Belarusian people”, after which we will receive another Nezalezhnaya on the border instead of the last ally. If so, the election results will not be recognized, and Russian troops will have to enter Minsk to restore order and maintain the constitutional order. But for this, we, too, are likely to receive a portion of Western sanctions.

These are sad prospects. It remains to decide whose person the candidate Viktor Barabiko is.
Ctrl Enter
Noticed oshЫbku Highlight text and press. Ctrl + Enter
We are
How Ukraine break Putin's plan: six tips Zelensky
Ten "defeats" of Putin
Reporterin Yandex News
Read Reporterin Google News
22 comments
Information
Dear reader, to leave comments on the publication, you must sign in.