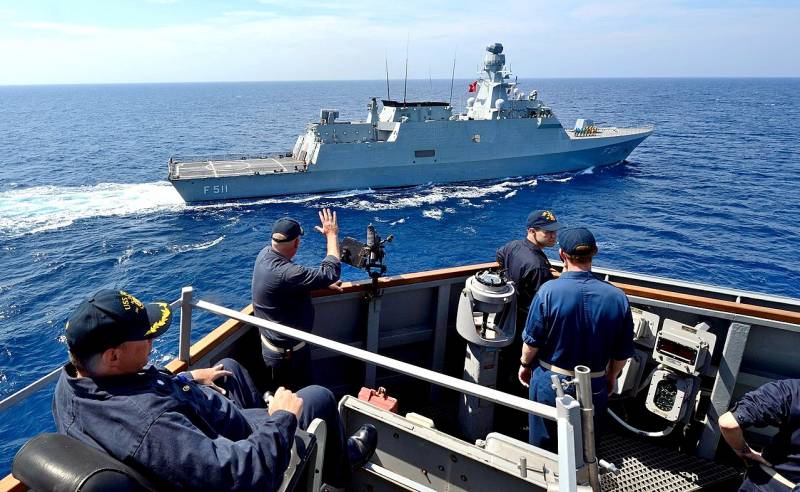 The military campaign in Libya risks becoming a prologue to the actual collapse of NATO. Like us and wrote the day before, in addition to Turkey and Egypt, new members of the North Atlantic Alliance - France, Italy, Greece - are becoming increasingly involved in the conflict between the PNS Sarajah and the LNA of Khalifa Haftar. Will “brain death” also mean “decomposition of the body”?


The case is getting worse. The French Navy frigate, as part of the NATO Sea Guard program, attempted to inspect a Turkish ship carrying a load of weapons to Libya. In response, the Turkish Navy frigate carried out a maneuver of evasion and took the radar of the target ship of its alliance ally. President Macron stated that such actions are incompatible with the status of Ankara as a member of the bloc:

I bring you back to my statements at the end of last year about the "death of NATO's brain." I believe that the recent incident clearly demonstrates this.
This is the second statement of this kind by the leader of the Fifth Republic. Apparently, the “allies” are ready to fight each other because of such a tidbit as the territory of the former Libya. Turkey was the first to “piss off”, having come to the aid of the Sarajah government, in exchange for which it gained access to rich hydrocarbon deposits, control over the sea shelves in the Eastern Mediterranean and the opportunity to open new military bases in North Africa.

Another NATO member, Italy, acts as its situational ally. Rome defends the interests of its energy giant ENI, all of whose contracts are signed with PNS Sarajah. Note that this alliance can hardly be considered durable and long-term: both Turkey and Italy are simultaneously the former metropolises for Libya, therefore, "having killed the bear", Ankara and Rome will certainly collide with each other.

But now they have crossed the road of one of the leading powers of the Old World, France. Africa has traditionally been the sphere of interests of Paris, on the territory of the "black continent" there are fourteen states, former colonies, over which France retains indirect control through a sophisticated financial system. President Macron needs to move Sarajah’s government to Libya to lobby for Total National Energy Corporation’s contracts. In addition, Paris does not like blackmail by Ankara on the issue of refugees. Having gained control of Libya, Turkey will gain the opportunity to “moderate” key migration flows from Africa to Europe, primarily to France. Previously, the French secretly supported Field Marshal Haftar, sending military advisers and mercenaries to him, as well as providing political "Roof" in the UN Security Council. But now Paris tried to block supplies of Turkish arms to Saraju, which led to the capture of his frigate "on the sights."

It remains to mention another member of NATO who is involved in local disassembly. This is Greece, a long-standing enemy of Turkey, with which she fought five times already. In Athens, they are preparing for "any" options, including military ones, said Greek Minister of National Defense Nikos Panayotopoulos:

Recently, Turkey's behavior has been quite aggressive. I believe that the only way for Greece to cope with such behavior is, on the one hand, to use its entire diplomatic arsenal, and on the other hand, to take care of strengthening the armed forces.
The Greeks really do not like the re-construction by the Turks of the marine shelves of the Eastern Mediterranean, where they have their economic interests, as well as the direction of refugee flows to them. Special mention should be made to the recently announced in the media the military plans of Ankara. It turns out that Turkey was preparing a scenario of an attack on Greece under the name "Chaka Bay" and on Armenia - "Altai". By the way, Yerevan is a member of the CSTO, so the war between the Turks and the Armenians would force Russia to intervene.

It turns out a real snake ball. Turkey has the second largest and most powerful army in NATO after the United States, France is the leading nuclear power in the Old World after Britain left the EU. Despite economic problems, Greece is among NATO leaders in the ratio of military spending to GDP. Perhaps these predators will be able to agree among themselves on the division of the territory of the former Libya and the resources of the Eastern Mediterranean. But not a fact.

As they say, if in the first act a gun hangs on the wall, then in the last it should shoot. The accumulated world economic problems and political contradictions are always ultimately resolved by a great war. It is possible that the scene will be North Africa and the Middle East, where the most serious geopolitical hub is confused.
Ctrl Enter
Noticed oshЫbku Highlight text and press. Ctrl + Enter
We are
Turkey’s purchase of S-400 will mark the beginning of the end of NATO
Ten "defeats" of Putin
Reporterin Yandex News
Read Reporterin Google News
4 comments
Information
Dear reader, to leave comments on the publication, you must sign in.