Egypt's entry into the Libyan conflict is fraught with devastating consequences 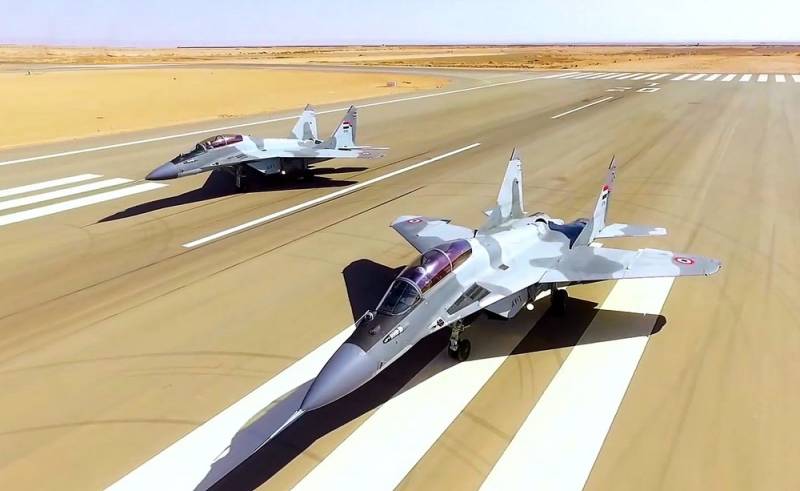 The Libyan campaign has seen another turning point. Now in conflict threatens to enter Egypt is already in full force, faced with Turkish military and pro-Turkish militants sent by President Erdogan to support Tripoli. How real is the war between Cairo and Ankara, and will it not be complicated by the intervention of more and more new players, among which may be Algeria and France?


Just a year ago, the army of Khalifa Haftar, who was behind Egypt, Saudi Arabia, the UAE, France and even, behind the scenes, Russia, tried to take the capital of “former” Libya in order to establish unified power in this territory. However, the PNS Faiza Saraj with the support of Turkey, Qatar and Italy resisted. Ankara was especially active in being able to knock out for itself in exchange for direct military assistance the favorable conditions for the redistribution of the sea shelves of the Eastern Mediterranean.

Today, it is Turkey that looks the most winning side. In addition to the “Mediterranean Shield” on the path of competitors' energy projects, it gained its own military bases in North Africa, as well as control over all migration routes to Europe. This will give Ankara the opportunity to exert pressure on the EU, which is unacceptable for the countries of the Old World. To stop the Turkish activity of the international coalition, a new player had to be nominated. Apparently, the Kremlin was offered such a role, but its capabilities to wage another war with Erdogan across three seas were clearly not enough.

To balance and bring to life the Turks will now have to Egypt. This country has a common border with Libya over a length of 1200 kilometers. Cairo rightly fears jihadists coming to power in Tripoli. The victory of PNS Sarajah with the help of Ankara over Haftar and gaining control over key territories will become a prologue to the renaissance of jihadism, which poses a threat to neighbors. Previously, Cairo supported Haftar with weapons, but the Field Marshal’s LNA ingloriously fled, retreating in front of a professional army of interventionists and thugs brought from Syria.

It is very curious on what grounds the Egyptian army can enter Libya. The only legal (legal) and internationally recognized government in this country is the PNS Sarajah. But at the same time it is illegitimate (not supported and not recognized by the majority of the population). Cairo can send troops to Libya at the invitation of the country's Parliament, which from the point of view of international law is not legal, but in fact legitimate. This is such a curious legal conflict, which in theory should be taken into account by other "geopolitics".

Is Egypt ready to really fight Turkey? The question is controversial. One side, economy this country is experiencing serious problems, a violent conflict is also possible on the nose with Ethiopia, about which we told earlier. To wage war on two fronts simultaneously is the path to defeat. On the other hand, the Egyptians cannot sit idly by either. Cairo does not want an Islamic state to appear on its border. Moreover, he needs to regain authority in the Arab world, especially since the support of the Saudis and the Emirates has expressed his support.

It is likely that Turkey and Egypt would prefer to limit themselves to a certain division of the former Libya and the creation of buffer zones. But the problem is that further forces can intervene in the game. So, Paris can say its word. Recently, a respected publication Le Monde published a publication in which the chief of staff of the French army, Thierry Burkhard, said that the Fifth Republic should now prepare for war with a “symmetrical adversary," and he cited the situation in North Africa as an example:

In place of the suppression of uprisings come new, "symmetrical" confrontation "state versus state." The separation of zones of influence in Libya between Turkey and Russia shows that such clashes may begin earlier than planned, and not far from France.
That is, in addition to the foreign legion and the “proxy”, Paris is able to send its troops to Libya if it considers that its interests are not taken into account properly. Even more interesting is that, on the other hand, Algeria may oppose the former metropolis. Although it is not customary to name this country in the list of states supporting Saraj, its authorities directly supported the PNS:

The fall of Tripoli would be the red line, because it would lead to the collapse of Libya.
Interestingly, the Algerian army prefers to use mainly Russian-made weapons: Su-30MKA multipurpose fighters, Project 636 diesel submarines, T-90S tanks, S-300PMU-2 anti-aircraft missile systems, and Pantsir-C1 air defense missile systems. The Egyptians bought a lot of expensive American weapons, for example, the M1 Abrams tanks and MRAP armored vehicles, but also the Russian S-300VM Antey-2500 air defense systems, the MiG-29 multi-role fighters and the ill-fated Mistral. Fighters of the 4 ++ Su-35 generation are also approaching.

The conflict, where Turkey and Algeria may start fighting with Egypt and France, is quite capable of radically redrawing the map of the Greater Middle East and is fraught with devastating consequences for the entire region.
Ctrl Enter
Noticed oshЫbku Highlight text and press. Ctrl + Enter
We are
Turkey has already won the war for Libya: what options remain with Russia
"Unknown Aviation" began to fight with the Turks in Libya
Reporterin Yandex News
Read Reporterin Google News
11 comments
Information
Dear reader, to leave comments on the publication, you must sign in.