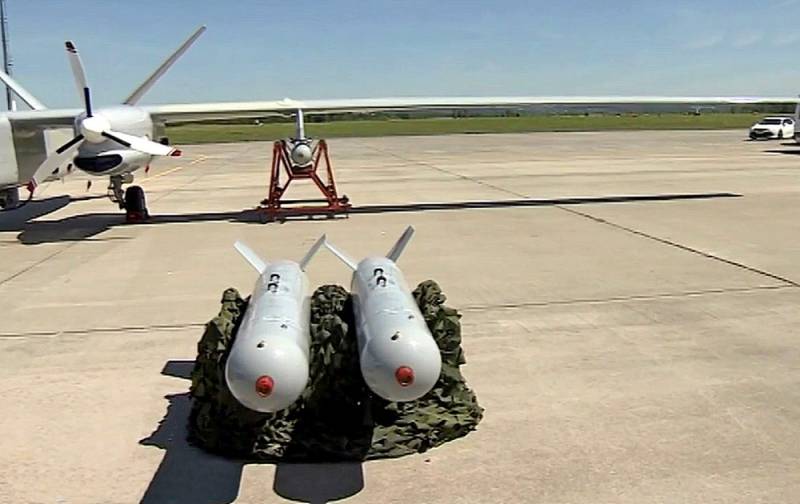 Russian reconnaissance and strike drones with long duration flights Altair (R&D Altius-M) began to be tested with weapons. This was announced during a visit to the Kazan Aircraft Plant by the Deputy Head of the Russian Ministry of Defense, Colonel General Alexei Krivoruchko.


It should be noted that the aforementioned drone was first lit up with ammunition. Judging by the video, while these are training inert bombs. But their visual characteristics correspond to high-explosive FAB-250 high-explosive bombs weighing 250-268 kg (some users on the Web considered overall similarities with the heavier FAB-500). This proved that the drone, which was developed for the Russian Armed Forces since 2011, can perform not only reconnaissance, but also shock functions.


The Russian military is looking forward to receiving this heavy drone. It has a takeoff weight of up to 5 tons. Its carrying capacity is about 1 ton. Flight duration up to 48 hours. Speed ​​- 150-250 km / h. It can rise to a height of up to 12 thousand meters. Flight range - 10 thousand km.

From the video shown, we can conclude that work on the drone is already at the final stage and it will soon appear in the troops. The drone will be able to carry 4 FAB-250 or 2 FAB-500, which is very good.
Ctrl Enter
Noticed oshЫbku Highlight text and press. Ctrl + Enter
We are
From the Volga to the Yenisei: the most powerful missiles of the future
What will Russia do when the ISS does not
Reporterin Yandex News
Read Reporterin Google News
10 comments
Information
Dear reader, to leave comments on the publication, you must sign in.