Russian APCs again did not let the Americans, deftly blocking their path in Syria 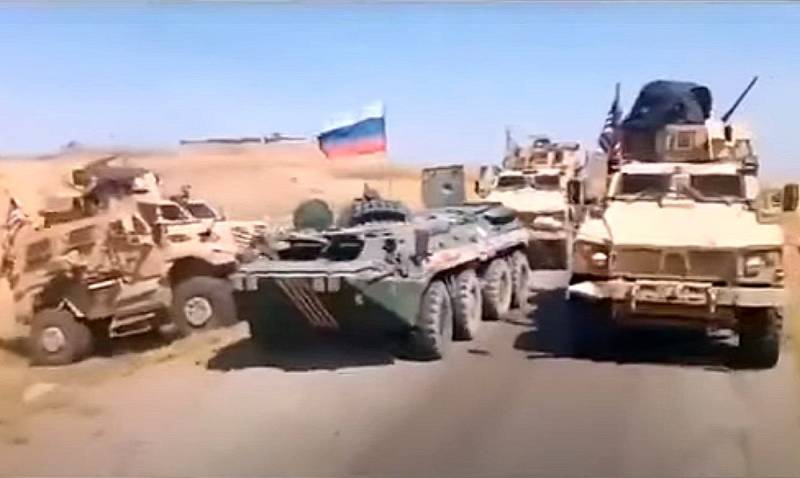 
The shooting is conducted from one of the Russian armored personnel carriers. The Americans and Russian armored personnel carriers are moving along a small road. One of Russia's military vehicles got in the way of an American armored SUV, stopping for a while. Then the Russians continued their movement, without stopping deftly blocking the way for United States military vehicles - it is not so easy to get combat vehicles on a narrow road.


Thus, the games on the roads of Syria continue. On Thursday, servicemen of both countries played catch-up in the province of Al-Hasaka - US armored cars stood in the middle of the road, not wanting to let colleagues from the military police of the Russian Federation. But the Russian military was not at a loss and skillfully traveled around artificial obstacles in its path.

June 10, a heavy armored SUV in the United States, trying to go around Russian military vehicles, drove on an earthen mound, after which smoke occurred - the radiator may have been damaged. A couple of days before the Americans tried block the military patrol from Russia, but to no avail - the Russian military cleverly circumvented the obstacle of the "partners" in military operations in Syria.
Ctrl Enter
Noticed oshЫbku Highlight text and press. Ctrl + Enter
We are
Russian patrol in Syria again furnished Americans
Prototype SUV from "Cortege" will be presented in late April
Reporterin Yandex News
Read Reporterin Google News
7 comments
Information
Dear reader, to leave comments on the publication, you must sign in.