Karelia - for 15 billion, the Kuril Islands - for 28: was Gorbachev going to squander the lands of Russia? 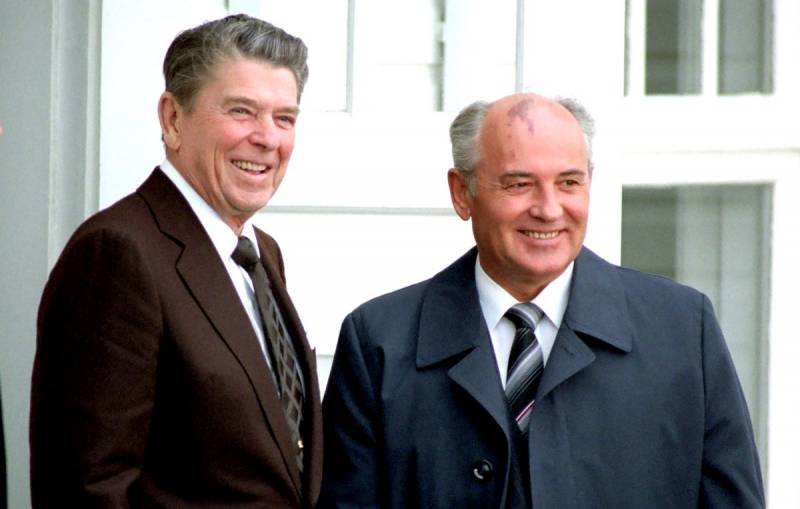 Another scandal associated with the name of Mikhail Gorbachev, which broke out in the global information space, can hardly be called a complete surprise. Something painfully often in recent years has begun to “pop up” information, adding to the already extremely unlikely for his compatriots appearance of this “statesman” features and details of an even more negative nature. Karelia, Kaliningrad, Kuril Islands ...


What else was Mikhail Sergeevich going to “sell at a reasonable price”? Are the stories about the "big sale" of Russian lands planned by him true, or is all this, as Gorbachev himself claims, "vile slander"?

The state will not become poor! Take it away!

Generally speaking, the behavior of the last General Secretary and the first president of the USSR in the last years of his reign to the limit reminds everyone of the well-known scene from the immortal "Ivan Vasilievich is changing his profession." The one where the drunken engineer, trying to pose as Ivan the Terrible, says to the Swedish ambassador: "Kemsky parish? Let take away to health! The king knows what he is doing! The state will not become poor! Take it! ” Alas, unlike the ingenious movie, there wasn’t anyone next to him who would shorten the presumptuous “king”: “What are you, a son of a bitch, an impostor, squandering state lands? So you can’t save any volosts! ” In a recent book of his own memoirs, the former diplomat, who at one time held the post of consultant to the Ministry of Foreign Affairs of Finland, Jukka Seppinen, claims that in 1990-1991 Moscow very actively “probed” the issue of transferring Helsinki to Karelia, and, in particular, the city of Vyborg, as it saw in this region a "burden" for economics. What is characteristic, this topic pops up far from the first time.

For example, the Finnish edition of Helsingin Sanomat made exactly the same statements a year ago, referring to Deputy Foreign Minister Andrei Fedorov. Then, I remember, the specific amount of the proposed transaction was even called 15 billion dollars. It is extremely indicative of what kind of reaction to this information was followed by all, so to speak, interested parties. Mikhail Sergeyevich himself, as usual, “made big eyes” and declared that he “hears for the first time” about something like this. Gorbachev Foundation’s spokesman Pavel Palazhchenko openly “wallow Vanka”, claiming that “all high-level negotiations are carefully recorded,” and there is nothing like that in the minutes of his patron’s talks with then-Finnish President Mauno Koivisto. Well, yes, let it tell small children ...

But in the Ministry of Foreign Affairs of Finland, they did not think to refute the information published by their former colleague! On the contrary, they expressed joy that "scientists today freely and critically discuss issues of history." So, then, after all, there was a thing ?! Too many coincidences and evidence that “converge at one point” and make one believe that yes. Let us recall a similar scandal that erupted after the publication in the German publication Der Spiegel that, again, in 1990, the top leadership of the USSR initiated the transfer of the Federal Republic of Germany to the Kaliningrad Region. Negotiations on this issue with the head of the protocol service of the embassy of Western Germany in Moscow in Joachim von Arnim allegedly were conducted by one of the senior Soviet military - the general, named in the article “Geli Batenin”.

Gorbachev, of course, called the revelations from Der Spiegel “an exaggerated sensation” and “a dead cat,” swearing with honesty that he had no such thoughts. Those who immediately rushed to whitewash the reputation of Mikhail Sergeyevich (on which, to be honest, there is no place to put the stigma on), immediately began to assert that “a general with that name never existed,” and, therefore, the whole story of pure water is fiction. Well, yes - with the way the Germans wrote, who love to change everything in their own way, really did not exist. But Major General Geliy Viktorovich Batenin is well known (only one letter was misinterpreted!), A completely real character. On the Internet you can find not only information about him, but even his images (in general form, with all the regalia) and books published by him. So this is not a lie. It got to the point that some began to assert: secret negotiations at the German embassy were part of a kind of “cunning plan” aimed at “disrupting the unification of Germany”. Gorbachev, of course, did not know about him either in sleep or in spirit. Somehow it is hard to believe.

So you can’t save any volosts!

About the same story with the Kuril Islands. Both Mikhail Sergeyevich himself and his loyal libels beat themselves in the chest so that only buttons on expensive suits crack: “It wasn’t! And it couldn’t be! ” Alas, there is too much evidence in favor of the fact that by 1990 the General Secretary who had slammed, let’s say, was ready to negotiate with Tokyo in the “right way” on this issue. Need, of course, the Japanese. No, he was probably not going to give the islands initially. However, already during his visit to Vladivostok, Gorbachev started talking about the need for "in-depth cooperation with Japan on a healthy, realistic basis, in an atmosphere of calm, not burdened with the problems of the past."

Further more. Arriving in Moscow in 1988, Ronald Reagan “strongly advised” the Soviet “leader”, who listened to the schoolboy, who listened to the student with his humility, to solve the “Kuril Question” in Tokyo's favor. And already in the same 1990, Anatoly Chernyaev, who served as assistant secretary general for international affairs, openly declared to the Japanese ambassador in Moscow that Mikhail Sergeyevich was “ready to give the islands in his heart”. Could he act in this matter without approval and direct instructions from the boss? Absolutely excluded! Around the same time, in Tokyo, in accordance with the information received, they began to calculate the amount for which the Kuriles would actually be redeemed from the Russians. The phantasmagoric figure of $ 200 billion, voiced somewhat later by Artem Tarasov (in fact, by his scandalous performance frustrating the deal being prepared) did not figure close there. It was about 28 billion in US currency, or even a slightly lower amount. After the information about the “undercover” negotiations that actually took place on this issue between Gorbachev and Japanese Prime Minister Yasuhiro Nakasone became public, both sides hastily “disowned” them. But it was!

This fact is fully confirmed even not only and not so much by the frank recognition of the then Minister of Foreign Affairs of the USSR Eduard Shevardnadze that “the Kuril Islands wanted to give to the Japanese,” but, God forgive me, “external policyGorbachev team of that time. What was it all worth signing ... yes, yes, you guessed it right - in 1990 the so-called “Shevardnadze-Baker Pact”, according to which the USSR for no reason “gave” to the United States more than 40 thousand square kilometers of its own exclusive economic zone, and even more than 46 thousand square kilometers of the Bering Sea shelf! It’s capitulary, which did not provide for any benefits and guarantees for the USSR, except for the promises “not to expand NATO to the East”, the unification of Germany, the withdrawal of our troops from Eastern Europe - which were, if not consistent, systematic and steady betrayal of the interests of our Motherland, the shameful surrender of all that for which entire generations of Soviet people worked, fought, lived and died ?! It is quite obvious that by 1990 Gorbachev and his gang (it’s impossible to call this pack “a team” or somehow more decent!), Having finally convinced themselves of the complete failure of the schizophrenic ideas of “perestroika”, “acceleration” and everything else, what they were broadcasting there in 1985-86, began methodically destroying the Soviet Union, destroying everything that they could reach. Alas, the opportunities for the traitors who had settled in the Central Committee of the party and the highest authorities of the country were extremely wide. It was not their fault that not all Russia, the successor of the USSR, managed to collapse, at least some heritage remained, which it, albeit at the cost of incredible efforts, was able to at least partially restore. They tried as best they could.

Gorbachev and other "superintendents of perestroika" today are not without reason trying to deny completely obvious things with foam at the mouth. First of all, there is no doubt that if their infamous "gesheft" in trading the Motherland were successful, then the money received as a result would subsequently "dissolve" completely without a trace - as happened, for example, with the "party money". Tales that Mikhail Sergeyevich and his relatives in such extremely dubious ways "tried to raise money in order to save the USSR from economic collapse", leave it for the very wretched. They did not intend to save anyone or anything - they themselves made this collapse, and they themselves did everything possible and impossible to make it inevitable and irreversible. In addition, there is practically no doubt that, starting from a certain moment, these scoundrels acted already at the direct direction of high curators from the West, who thought and made plans where it was far-sighted. Please note - all the land planned for sale belonged to Russia! Therefore, the goal was precisely its maximum attenuation. And in no matter in the economy is the point! Kaliningrad, Karelia with Vyborg, the Kuril Islands ... Those who pushed Gorbachev to these treacherous deals were concerned, first of all, with the aim of causing maximum damage to the military-strategic positions of our country, its security, its potential geopolitical interests.

There can be no talk of any “thoughtlessness”, “evil zeal” or ill-conceived, but well-intentioned. And even selfish motives in this case were, most likely, in second place. There are cynical and cold-blooded acts that are fully and completely covered by the article of the Criminal Code of the RSFSR, which states treason and subversive actions against it, aimed at the benefit of foreign powers. That is why the participants in those events are so diligently trying to relieve themselves of responsibility for their actions thirty years ago. And it’s very vain that no one today initiates full-scale investigations in this regard. It is unlikely that anyone will dare to judge and punish the “perestroika” for their criminal acts, but you can at least call villains villains, and traitors - traitors.

The most interesting thing is that in the West all these murky stories bring out God's light not by chance - in this way they try to remind Russia of the times when it was “negotiable”, but actually demonstrated its readiness to dance to the tune of the “civilized world”, to the detriment of imagine any of his whims. For us, this really should be a reminder and a lesson. Or rather, a clear warning as to what awaits our Motherland if, God forbid, it is again possible to push it onto the path of “liberal democratic reforms”, having arranged a new version of the deadly “perestroika”.
Ctrl Enter
Noticed oshЫbku Highlight text and press. Ctrl + Enter
We are
Ukraine from the inside: traitors, curators and those who watch from the Kremlin
Ten "defeats" of Putin
Reporterin Yandex News
Read Reporterin Google News
17 comments
Information
Dear reader, to leave comments on the publication, you must sign in.