Capture Donbass by NATO hands: why does Kiev aspire to the Alliance 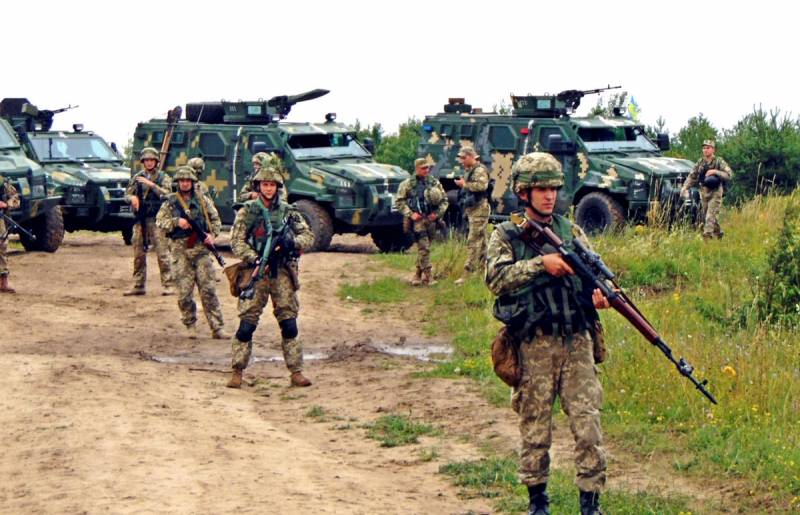 On June 12, to be exact on Russia Day (which certainly cannot be a mere coincidence), Kiev received another “powerful positive signal” from the North Atlantic Alliance. Now the “non-fallow” is for him not the “aspiring country” (Aspiring country), but is in the status of Enhanced opportunity partner - “partner with advanced features”.


Yeah, given some of the nuances of relations between Ukraine and NATO, it sounds somehow ambiguous ... Nevertheless, it’s worth trying to figure out what this event really means: for the military bloc that so welcomes Kiev, for itself, and, most importantly, For Russia?

New features or the old "carrot"?

According to the deep conviction of representatives of the Ukrainian authorities, this news it is simply obliged to provoke nationwide glee (despite, for example, the sharply increased spread of the coronavirus, which has even reached the presidential family), and lead to another explosion of "patriotism". There is somehow no general enthusiasm - ordinary Ukrainians are more concerned about the rampant illness, the decline economics and the search for food, while political scientists and experts who are not 100% pro-government express concern rather than joy. First of all, in fact, all those who caress the ear of Kiev politicians and officials of "high-profile" statuses handed out by Jens Stoltenberg, there is simply no clear legal status. As the unforgettable professor Preobrazhensky used to say, "it is completely incomprehensible what is hidden under this word." In theory, EOP status is assigned to states that have "special services" to the Alliance, at least in the form of "a significant contribution to its missions and local operations." And where is Ukraine here?

However, Australia with Jordan, Sweden with Finland and, of course, Georgia can boast of such a "high status" today. Here are just direct associations with the latter that do not give rest to those analysts in the “unfettered” who have not yet lost the ability to think adequately. There is an extremely high probability that Kiev will repeat the fate of Tbilisi, which at one time was more than actively “stimulated” (and by calling a spade a spade it was simply implanted), pushing for a military conflict with Russia. At the same time, the Georgian authorities are vaguely and meaningfully alluding to "the most decisive support" that will be provided "in case of what." “What” happened, and even how, only Saakashvili, who believed all these promises, “partners” in the end left thoughtfully chewing a tie in complete and far from proud loneliness ...

What will seize the bitterness of defeat and deceit Zelensky - is unclear. Yes, this is not the point. The main thing is that the gentlemen of the North Atlanticists once again allegedly "bring closer" a country that they intend to use extremely rude and cynical. At the same time, by the way, no matter what kind of NATO membership it is, nobody will accept a state where there is a civil war. There is no real benefit for Kiev and it cannot be - if anyone does not know, the Alliance does not pay a penny to Ukrainians for participating in its missions. Former Minister of Defense “Nezalezhnoy” Andrei Zagorodniuk in a huge article published in one of the leading local online media spills over with a nightingale, describing those “enormous advantages” that the country supposedly will have from the new status, received, by the way, “previously planned term ". In the above list, it is especially touching “the opportunity for the Ukrainian military to occupy new positions in the command structures of the Alliance." Yeah, Stoltenberg will have a new deputy from Zhashkova or Kolomyia ... Right tomorrow!

Even more interesting is “access to intelligence and other strategic information”. Rather, the "exchange thereof." Well, the fact that Ukraine will not be allowed to keep NATO secrets for a cannon shot is understandable. But now they will use it to collect intelligence related to Russia to the fullest, so there is no doubt about it. Moreover, Zagorodniuk himself is already delighted with the prospects of "using NATO's Ukrainian experience in the armed struggle against the aggressor country." The game will go, so be calm. It’s just that it will be conducted “in one gate” and it is absolutely clear in whose. For example, right now, in order to obtain the coveted new status, Kiev agreed to create a “autonomous Hungarian region” in Transcarpathia, thereby buying the favor of Budapest.

The goal - the capture of Donbass by NATO?

However, it is quite possible that some in Kiev see the situation exactly the opposite. It is very likely that certain forces in the “unfathomable,” categorically unwilling to follow the path of a peaceful settlement of the country's seventh year of civil war, are going to “solve the problem” of the unconquered East precisely with the help of their newfound “partners” from Brussels. It is not for nothing that the topic of introducing “peacekeepers” from NATO into the region has been tirelessly exaggerated by the Kiev regime for already a year. And, apparently, today, among his "new" (and in fact, absolutely no different from the "old") representatives, it is precisely this point of view that prevails. In any case, nothing else can be explained by the fact that Ukraine, in fact, has embarked on the path of a complete rejection of all the provisions of the Minsk Agreements, including those whose commitment it has more or less successfully simulated so far.

For example, the deputy head of the “non-fallow” delegation in the Trilateral Contact Group (by the way, a member of parliament from the presidential faction “Servant of the People”), Alexander Merezhko openly stated that the “Minsk Agreements” for Kiev “are not binding at all.” We want - we fulfill, we want - we change our minds ... According to the representative of Russia in the TKG Boris Gryzlov, Ukraine has reached such impudence for the first time. However, as it turned out later, this was far from the limit. At a meeting of the contact group on June 15, negotiators from the Nezalezhnoye roused the audience with a completely enchanting package of ultimatum requirements: “immediate restoration” in the territory of the Republic of “full Ukrainian legislation”, including the tax system, as well as “a complete inventory of all property in the DPR and LPR, both public and private. ” Presumably, they are going to rob Donbass of high quality ...

Against this background, even the appearance in Minsk of some, God forgive me, clowns declared by Kiev as "representatives of immigrants from the occupied territories", looks already natural. It is clear that these crooks who entered the TKG, immediately declared the ambassadors of Donetsk and Lugansk “illegitimate”, did not add any constructiveness to the negotiations, which were already not brilliant. So Kiev doesn’t need any performance! Returning to the NATO theme, we can confidently say that Ukraine’s attempt to penetrate this block even with a carcass, even with a scarecrow, in itself puts a fat cross on any real prospects for the “reintegration” of Donbass, the inhabitants of which the North Atlantic Alliance and membership in it have seen, excuse me, in a coffin and in shoes of the appropriate color. In fact, Vladimir Zelensky, who came to power only in the wake of the nausea that the previous president caused the overwhelming majority of voters, had a choice: to listen to the real desires and aspirations of the Ukrainians and begin to at least gradually turn off the disastrous path that the country was dragged into maydanschiki ”and Poroshenko. Or, having spit on everything, to continue the course of the predecessors, which can lead exclusively to an ever tougher confrontation with Russia. Judging by the next step towards NATO, this choice has been made. It is final and can no longer be appealed, so now the Kremlin can only work out options for further retaliatory actions precisely in the framework of the most pessimistic scenario. Apparently, they understood it there - for example, nobody even sent invitations to the celebration of Victory Day Zelensky. Died, so died ...

With Donbass, you can, of course, continue to break comedy in the future - whether in Minsk, Norman, or some other format. But why, pray tell? Ukraine is becoming more cheeky, more aggressive. From there, over and over again, quite specific calls have been made for striking Russia or carrying out terrorist acts on its territory. For example, the director of the Pavlograd chemical plant producing rocket fuel Leonid Shiman recently quite seriously ranted that it would be possible to “launch a missile attack on Russian critical infrastructure facilities” with the help of the “latest” Alder MLRS, with which “ Nesalezhnoy "have been rushing for several years, as with a certain" wunderwaffe ". As a very successful target for the attack, this activist named, in particular, the Kamensky refinery in Kamensk-Shakhtinsk, Rostov Region. For some reason, he is sure that the “super-duper rocket” will certainly fly in Ukrainian ... The deputy of the city council of Ternopol from the party of European Solidarity Petro Poroshenko Taras Bilan went even further. This one is not going to exchange for some sort of rocket attacks there at oil refineries. He immediately offers the Ukrainian NJSC Energoatom “to urgently begin to create, together with research institutes,” hundreds and a half atomic charges and the so-called “dirty” bombs. To put nuclear warheads on missiles RK-360MTs "Neptune", which should be aimed at Russia and Hungary. "Dirty bombs", without wasting time in vain, by the forces of "specially created sabotage groups" deliver to Moscow, St. Petersburg and Budapest, where "put on alert." Or maybe immediately rush to hell ?!

All this, mind you, is not nonsense recorded by the staff of the corresponding medical institution, but quotes from Bilan’s official appeal to President Vladimir Zelensky. And what did Zelensky do? Sent the author to a psychiatric examination? Raised the question of the admissibility of his further work in government? Well, at least you restrain somehow? Nothing of the kind. Such ideas, apparently, are now very relevant for Kiev and not only. It is difficult to believe that NATO does not know or do not understand who exactly is awarded the status of "partner with advanced capabilities." In theory (and in accordance with many international agreements), the Alliance should consider how the Alliance should consider how to unleash a war, especially nuclear war, the officials whose officials (it doesn’t matter what level - but not the wipers) A potential candidate is not for membership, but for the introduction of a peacekeeping contingent. And if this does not happen, then such calls, no matter who they make, are fully consistent, if not specific plans, then at least the way of thinking of the North Atlantic Alliance itself regarding Russia. It is on this basis that we should draw conclusions about what to expect from Ukraine and its “partners”.
Ctrl Enter
Noticed oshЫbku Highlight text and press. Ctrl + Enter
We are
How Ukraine break Putin's plan: six tips Zelensky
Ten "defeats" of Putin
Reporterin Yandex News
Read Reporterin Google News
7 comments
Information
Dear reader, to leave comments on the publication, you must sign in.