“The era of endless wars”: Trump declines to fight, meaning the opposite 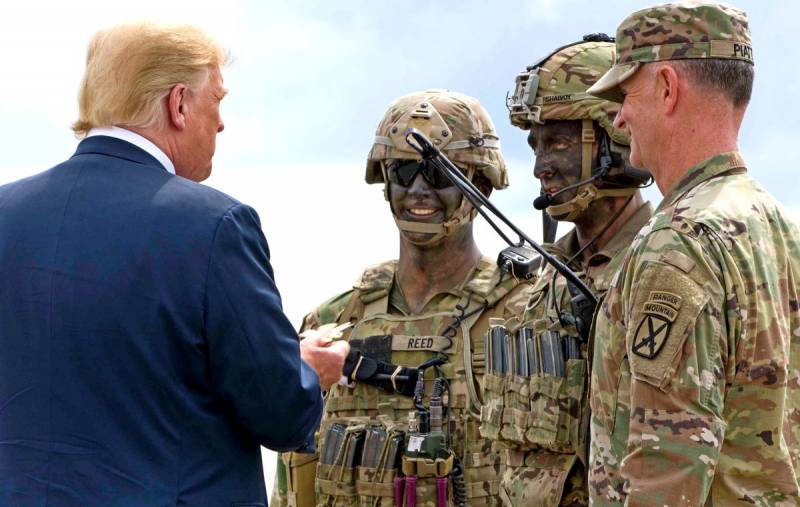 The President of the United States, Donald Trump, struck the world with yet another “epoch-making” statement, as loud as it was ridiculous. Speaking to graduates of the West Point military academy, he solemnly proclaimed the "end of the era of endless wars" that the United States waged around the world, upholding the "high ideals of democracy" to the last drop of blood of local residents.

We are not cops of this world!
Trump uttered pathetically at last.

Are you done with laughter? I understand that it’s hard to stop, but still let the tears come to our eyes in the morning and try to figure out why the words of the head of the White House should not be believed for a penny.

If through and through the hypocritical sayings of the American leader are capable of causing a clear and unambiguous association with anything, it’s only with a crude but vital proverb regarding an animal known to all of us that has refused to eat all sorts of unapproachable things. Generally speaking, to listen to Trump, the world would have collapsed a long time ago if it had not been for the “American warriors”, whose “noble power and righteous glory” which “cannot be compared to any force on Earth”. Yeah, tell the Vietnamese ... Or the Iraqis. At the same time, by the way, the president weighed another colossal historical nonsense, saying that ... West Point graduates won the "bloody war with imperial fascists and sinister Nazis"! What kind of Zhukov, Rokossovsky and all kinds of Malinovskys and Konevs are there ?! Only MacArthur, Patton, Eisenhower and Bradley defeated Hitler, took Berlin and hoisted the flag over the Reichstag. Star-striped, naturally. Well, that’s if you listen to Trump.

Generally speaking, after such an "insight" a person is supposed to click orderlies who would quickly make him a little calming something, but this is the president of the United States. So there was nothing left for the grateful listeners (who, however, I’m sure they had no idea what kind of nonsense they had spewed from the rostrum), how to listen to the nonsense of their own commander in chief further. And Mr. Trump, meanwhile, assured the audience that they would no longer have to "endure in distant lands" because of the lack of cold Coca-Cola, "resolving ancient conflicts that no one had even heard of." Sabbat! Basta! From now on - exclusively "decisive defense of the nation from foreign enemies." Enough, they’ve been at war ... No more “restoration of foreign states by the American army”! Yes, yes - that’s exactly what he said: “recovery.” Personally, at that moment my laughter almost turned into hysteria ...

In the finale of the speech, Trump personally attributed “the complete destruction of the ISIS wild caliphate.” What are the VSK of Russia and the Syrian army? There was nothing like that. I dreamed ... What is interesting, after such a sensual speech emanating from pacifism, through which, as I recall, it was once said that the United States has finally stopped poking its nose into the internal affairs of all states that are unable to fight off their "help", the future officers for some reason did not get bored or upset. None of them began to sadly pull off their new uniforms, preparing to fill up the ranks of American unemployed who had grown to fantastic sizes. You can relate to the US armed forces as you like, but they’re definitely not keeping completely idiots there. In any case, among those gathered in the West Point assembly hall there were definitely none.

Everyone who was there heard in the presidential speech what was really intended not to hang the ears of the American television channels, which all together, as one, broadcast the Trump speech, and specifically to them. And they correctly perceived his words that investment in the war under him reached a record $ 2 trillion. Future warriors heeded the promises regarding their intended "hundreds of new bombers, fighters, helicopters, as well as missiles and military satellites." And about the “fastest hypersonic missile in the world, striking a thousand miles with an accuracy of 14 inches,” I am sure they also understood everything correctly. Well, it’s probably the one that is “super duper”! They, who perfectly understand where there were fairy tales for the “electorate” in the presidential talk, and where there was an exposition of real plans and prospects, did not even think of a logical question: “And what kind of mischief country, which decided to abandon the role of the“ world gendarme ” , all these hundreds and thousands of strike combat aircraft, ships, tanks and missiles? ”

No pathos, but with numbers

Well, and we, West Points did not finish, let’s ask ourselves this question. And to find an answer for a start, let us consider in a very general way the indicators of the US military budget-2021. The draft of this fascinating document has already been approved by the Committee on Armed Forces of the Senate of the US Congress, and the corresponding release has been published by the Pentagon's Audit Office. Well, there they can be quite happy - there is no question of any reduction in funding for military spending (which would be more than natural if the United States really were going to stop making armed adventures around the globe)! On the contrary - there is an increase in them. True, only 0.1%, but taking into account the fact that a week ago, according to the data of the Ministry of Finance, the state debt of the United States exceeded $ 26 trillion, and the budget deficit approached 2 trillion, it’s nothing at all. And the total figure of 705 and a half billion dollars allocated to the warriors, you see, is impressive. Even the most cursory acquaintance with the main expense items leaves an even more lasting impression.

Recall, according to the new nuclear doctrine presented just by the Trump administration last year (before that the document had not been edited for 8 years, at least), the country intends to invest at least $ 100 billion in the production of new elements of the “nuclear triad”. And the process is in full swing - in 2021, the Pentagon will receive about 30 billion for the modernization of its atomic forces, about 3 of which will be invested in the latest strategic bomber B-21. More than 470 million will go to a long-range missile development program. More than 20 billion has been allocated for the modernization of the missile defense system and about the same amount for “space operations”.

A record 106 billion will be spent on the development of the latest weapons systems, primarily hypersonic. So talking about something “super duper” is not a joke, but rather concrete plans. Generally speaking, the Congressional Budget Office, which is not at all humorous, openly states that over the next decade, the country's spending on nuclear weapons will be “radically” increased. How radical? This can be judged by the fact that only until 2028 it is planned to spend about $ 500 billion on these goals. This, incidentally, is almost a quarter more than planned last year. “But what if Washington doesn’t even think about using all these huge arsenals against someone and arm themselves exclusively for self-defense?” - perhaps you ask. Do not flatter yourself. While Trump is grinding his tongue at military academies, serious people on Capitol Hill are doing serious things. So, the party members of the current head of the White House from the House of Representatives of the United States of America united in the Republican Study Committee (RSC), having grunted for a whole year and a half (!), Gave out a comprehensive report of as many as 120 pages with an inspiring title: “RSC National Security Strategy: Strengthening America and countering global threats. ” Congressman Michael Johnson, who leads this gang of watering can, declares without hesitation that the document is nothing more than a “plan to maintain American leadership around the world and promote policy The US, which includes two main components - American dominance and American values. " And it should serve "the restoration of the United States its role as the greatest force of good" on the planet.

Wait, but what about Trump’s statements then ?! Yes, full of you ... You did not think that it was serious? The congressmen’s report says in black and white that “the world today is under the most severe threat from Russia and China,” and if so, the United States, as “leading and guiding,” “needs it more than ever.” That’s the whole story. And if someone suddenly thinks that the document over which the wise men from RSC have been piling for so long is just a set of common cliches and political abstractions, then he will be deeply mistaken. This is a very deep, one might say, systemic development, on the basis of which it is proposed to radically change the US foreign policy. How exactly to change? Judge for yourself - the "unprecedented sanctions" its authors do not require imposing against any individual Chinese corporations, but against "all the highest leaders of the Communist Party." In fact, taking into account the realities of the Middle Kingdom, this will mean declaring a full-scale war - diplomatic, for starters. Iran is proposed to “completely block”, first of all, through the most severe strangulation of all its sectors economicsnot even related to oil. Well, and Russia ...

In this star-striped “plan of Barbarossa”, Russia has been allocated a long list, a dozen and a half points, consisting of a wide variety of procriptive measures. Sanctions, sanctions, sanctions ... Against the public debt, against Vnesheconombank, against the Putin oligarchs and the leaders of Russian propaganda, against any companies that dare to participate in the construction of Nord Stream-2 and so on. The list contains much more, which is no less interesting - open military support for Georgia and Ukraine, “forcing the Kremlin to return Crimea,” disconnecting Russia from SWIFT, and so on, in the same vein. As a matter of fact, the “alpha and omega” of all these proposals is the main among them - the recognition of Russia as the “sponsor country of terrorism”. Including, for the support of the Republic of Donbass. Everything else is, in fact, particular. The main thing here is that it is precisely these gentlemen who, with such delight for a long time, thoughtfully and meticulously conceived - what other blow to bring down to our Motherland, they will just vote for the very military budget, the provisions of which are given above.

You will laugh again, but some, on the basis of what Trump said at West Point, managed to conclude: the United States, "exhausted by the coronavirus epidemic, an unprecedented economic crisis and social protests erupted in the country," really "intend to abandon the role of world hegemon." Seriously and without jokes ... Gentlemen! To the library, and immediately! There, on shelves marked with the letter “I,” you can come across such wonderful things as history books. By opening any of them, you will be convinced that, firstly, the United States emerged from any crisis just thanks to a war (preferably a world war), and secondly, it was the two world-wide massacres that followed one after another that just allowed them to the very place of the “world gendarme”, which Donald Trump allegedly refuses today. Do you still believe him?
Reporterin Yandex News
Reporterin Yandex Zen
3 comments
Information
Dear reader, to leave comments on the publication, you must sign in.