The "rainy day" of the West: what are the real reasons for the raging protests? 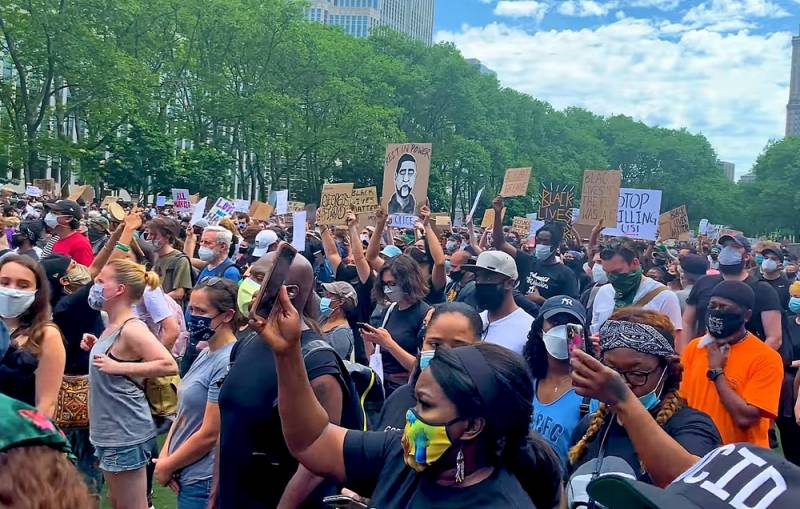 
Judging by their geography, and, first of all, based on what the newly-minted "fighters for justice" are doing, the point here is not at all about the "atrocities of the American cops", not about the "police arbitrariness" in general. And the racial “coloring” of the riots that swept the entire Western world also seems to be pretty “far-fetched”. So what is the reason then?

George Floyd is killed, but the truth ...

Before starting an extremely frank conversation on rather sensitive and provocative topics, I will make a reservation: any “racial” ideas are not only completely alien to me, but deeply disgusting. As well as views based on the assumption of superiority of one race (nation, nationality, ethnic group, etc.) over others. Everything that could and should have been said about this “ideology” is contained in the materials of the Nuremberg trials. It’s a pity that humanity is increasingly forgetting about them ... With all this, I can’t help but ask myself why the world exploded precisely because the black man didn’t survive the police detention, speaking in domestic legal terms, an “especially dangerous recidivist” with an extremely impressive criminal history "? Would there be such a sharp and massive reaction if, say, a white US citizen who had never had problems with the Law in his life died? The golden coffin and generally the funeral at the national hero level, kneeling and millions of dollars collected by the family of the “innocent murdered” ... Impressive.

That's just all this looks a little wild against the background of six convictions of Mr. Floyd, which he had at the time of his death. Three for drug possession, one (the very first) for attempted theft. The next one is for robbery. In 2007, “cute” Floyd, a failed athlete and rapper, broke into the house of a pregnant woman (white) with the same scumbags and extorted money by putting a gun to her belly. He received only five years by virtue of the “deal with the investigation”, to which he willingly surrendered all his accomplices with giblets. So, “according to concepts”, he also doesn’t look very ... At the time of his arrest he was definitely under the influence of drugs and today no one can say with absolute certainty that heart failure was not connected with this fact - both examinations were carried out by interested parties and each could be “tweaked”.

All of the above does not in any way justify the brutality of the police. Nevertheless, before accusing everyone of the US cops that they are maniacs, just waiting for an occasion to shoot or maim a detainee (especially a black man), one should understand the circumstances in which they have to serve. Killed the day before, June 12, in Atlanta, Richard Brooks was so drunk that he fell asleep in his own car in line to a fast food restaurant. Naturally, while driving. When the police appeared, he started a fight with them, took a stun gun from one, and rushed to run. The cops simply triggered a “gunshot instinct” and they opened fire. Why?


To understand this point, consider another incident that happened the next day in San Antonio, Texas. There, in the same approximately (only much more aggressive) state of "bitten" alcohol, the "client" dared not to be allowed into the bar. Eager to add and offended in the best feelings, the visitor went to his own car, from where he returned with a shotgun, from which he opened indiscriminate fire on everyone who “got into sight”. 8 people were injured. For many years, the US police have been operating in the realities of the Wild West, where the one who first pulls the trigger survives. The Americans, as they say, have sown, they are reaping. The huge problem of the oversaturation of the society there with weapons has already been written-rewritten. By the way, I spoke on this topic long before the current events and in the sense that it will certainly come out sideways - I remember a couple of mocking comments under the article: they say, "do not exaggerate." What are you, what are you ... Of course not.

The triumph of justice? Or absurdity?

Now about the "racial violence." Recently, a lot of studies have been published in the world media, including those with various graphs, charts, and other extremely illustrative illustrative materials that rigidly and uncompromisingly reveal the “terrifying truth” - less than 14% of the US population blacks occupy almost a third of the “seats” in the prisons there. They are twice as likely as Americans with a different skin color to be detained for drug use. And ... Yes - 23% of US citizens killed by police in 2019 are just black. “Well, it's not three-quarters, but less than one ?!” - You ask a reasonable question. “Well, after all, there are far fewer African Americans and in percentage terms, you are a hell of a racist!” - Black Lives Matter activists will indignantly answer you. And they will tell the truth. Rather, only half of it! Which, however, is not surprising - the "racial" crime statistics in the United States is not only a secret behind seven seals, but also an object of completely unscrupulous manipulations.

For example, since 1986, Latin Americans also began to be counted among the white citizens of the country! This socially and criminally extremely unfavorable public quickly helped to “tweak” the figures, which before that had more than eloquently testified: the vast majority of crimes, primarily grave and violent, were committed in the country by black people. In recent years, when the relevant statistics were more or less objective (the end of the 90s of the XX century), the FBI reported: the level of violent crimes of blacks against whites exceeds the “white” crime, black victims of which are 55 times! The number of violent crimes committed in the group is 102 times, respectively (if we talk specifically about the robberies - 277 times). The highest homicide rates are recorded in states and cities where blacks predominate.

And by the way, who said that the numbers that BLM trumps are true? For example, according to the US Centers for Disease Control and Prevention (CDC), from 1999 to 2015, police in the country shot and killed 2.151 white criminals and 1.130 black ones. And, by the way, some ten years ago there were more than half of black “prisoners” in American places of deprivation of liberty! Became more law abiding? It is unlikely. Rather, the fact is that judges, fearing the accusation of racism, became increasingly confined to conditional punishment where, if they were white, they would have been “soldered” to the fullest. Generally speaking, what is happening now perfectly demonstrates the true essence of the “democratic freedoms” of the West.

On June 3, in the Opinions section of The New York Times, an authorial column of Republican Party Senator Tom Cotton was published with the following heading: “Enter the troops. It's time to restore order in the nation. The army is ready! " As a result, Opinion Editor James Bennet appeared on the street almost instantly. Yes, and there is no doubt with the “wolf ticket”. Editor Stan Wisnowski ruthlessly kicked out of Philadelphia Inquirer - he, you see, published an article by Buildings Matter Too, in which he expressed concern that unbridled vandals could harm architectural monuments. But how dare he threaten to “sacred” ?! Also, to mimic the slogan, under which now the “oppressed” on both sides of the ocean “defend their rights”. But at the same time - they carry shops, rob car dealerships, organize pogroms and arson ... Here you have the "freedom of speech", and in all its glory. Meanwhile, the popular American streaming platform HBO Max completely removed the classic movie Gone With the Wind from rent, one of the films where the American Civil War and the life of the “slave-owning” South are shown at least relatively objectively. How can you! This is rabid racism!

And by the way, Mr. Wisnowski is not so wrong in his fears - I don’t know what about the historical buildings, but the monuments from the militant radicals from the Black Lives Matter have already been completely recovered, and not only in the USA. Well, it was only about the demolished monuments to the commanders and statesmen of the Confederation like General Lee or Jefferson Davis. Columbus didn’t please you, the announced ones ?! However, in Boston, the monument to the discoverer of America was torn down, and in Richmond (Virginia), his figure was overthrown from a pedestal and drowned in a nearby pond. And rightly so - why is he ?! In Belgium, the statue of King Leopold II went to - also, as it turned out, a colonizer and a reptile. However, the British “fighters against racism” outdid everyone and everyone in the schizophrenic zeal for “restoring historical justice”. Not only that, they organized the whole movement Topple the Racists, setting as their goal to destroy at least 60 "shameful" monuments, which included the monument to Winston Churchill. These originals in all seriousness called to demolish the damn grandmother ... The Great Pyramids of Giza! On the grounds that these structures "were built by slaves." The next step, presumably, is the Roman Colosseum, the Athenian Parthenon, and much more. Or are European slaves not considered?


This whole theater of absurdity in fact has nothing to do with either upholding civil rights, or opposing racism, or anything else like that. Thinking people are already beginning to think hard about a number of tricky questions that are literally asking themselves, it is worth looking at what is happening more or less objectively. For example, is the current “explosion” simply a continuation of the plan that was launched by the coronavirus pandemic? What if someone (let's say) has a firm intention to “reformat” our world, but he was not able to push humanity into chaos and anarchy with the hardships associated with total quarantine and the economic crisis caused by it? And what? Version, at least, having the right to exist. In any case, the direct connection between the pandemic and the "senseless and merciless" unrest that gripped the planet is obvious. There is only one question: is the second a consequence of the first, or are these two parts of a “play” with one scenario? There are, however, more prosaic explanations. They are pushed, for example, by the results of a sociological survey conducted by NBC and the Wall Street Journal. According to them, 80% of respondents believe that the situation in the US "has completely gotten out of control", and, most importantly, that Joe Bailen, perhaps, "would be better able to deal with the impasse that is now prevailing in Washington." What racism, what cops? Elections on the nose! Not without reason did Biden nightingale spill over at Floyd’s funeral about “changing the world for the better,” though online, not live. And his Democrats of the same party staged a steamy show on their knees (after which old Pelosi was barely raised to her feet), dressed up in "African scarves." This, incidentally, infuriated local "anti-discrimination fighters" who were indignant: "What the hell ?! Floyd was an American, not some kind of African! ”

Incidentally, after the death of Floyd, the Minister of Tourism, Art and Culture of African Ghana, Barbara Oteng-Gyasi, very seriously addressed all African-Americans with an appeal to return to the homeland of their ancestors, where they “will be free from the racial oppression suffered by 400 years old". Wishing something is not observed ... No. Your will, but the “rainy day” that has covered the United States and Europe now, is not about racism. This is about something completely different.
Ctrl Enter
Noticed oshЫbku Highlight text and press. Ctrl + Enter
We are
Ukraine from the inside: traitors, curators and those who watch from the Kremlin
Ten "defeats" of Putin
Reporterin Yandex News
Read Reporterin Google News
9 comments
Information
Dear reader, to leave comments on the publication, you must sign in.