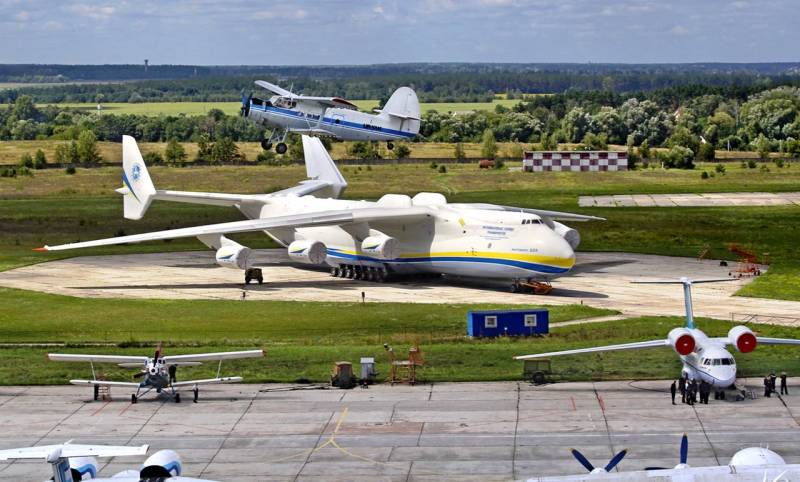 In the "nezalezhnoy" situation again aggravated around one of the few, still somewhat working, high-tech enterprises of the country - the aircraft-building company GP Antonov. It came to almost an open revolt of employees of its constituent structures, unsuccessfully trying to "reach out" to the government in their attempts to save what remains of the once-powerful industrial giant with a worldwide reputation and billions in turnover.


However, apparently, the Antonov team does not have to count on a successful outcome. This enterprise, as well as all similar “fragments of the Soviet past” of Ukraine similar to it, most likely expects bankruptcy, collapse and complete destruction. Let's try to figure out why.

One of the main claims that the Antonovites who have despaired of finding justice in their official appeals to all the “first persons” of the country — the president, heads of government, parliament and the National Security and Defense Council — is truly harmful, in their opinion, policy, which in relation to the enterprise is consciously and purposefully conducted by the Ukroboronprom concern. Antonov was not lucky to be a part of this association in 2015 and, almost immediately after that, the head of Ukroboronprom Aivaras Abromavicius developed violent activity around Antonov. It’s just that it was not directed at all at saving the more and more degrading enterprise, but at establishing full control over its still “living” assets. One check in the company replaced another, the auditors dug with the tenacity and intensity of the excavators, completing the task to gain enough negativity and dirt on its head, Alexander Donets.

This leader turned out to be “inflexible” and, without showing understanding of the plans of his higher authorities, he began to rest, trying to defend, first of all, the production capacities that Ukroboronprom clearly intended to “merge” and put into liquidation. In the end, Donets was fired “for miscalculations in the leadership”, and in his place Abromavichus planned to put his own “confidant”, a certain Ruslan Korzh, who has a rather dubious attitude to the aircraft industry (for example, in Russia this figure worked for AEROMAR, not involved in the creation of aircraft, but in the supply of food for their passengers). But Korzh has long and very successfully struggled as the "right hand" of the current head of Ukroboronprom.

The situation with the aviation direction in the concern, which, on the basis of the name, has the main responsibility for strengthening the “non-down” defense, is best demonstrated by the glaring story that recently happened at the Lviv State Aviation Repair Plant that is part of it. One of the elderly MiG-29 fighters of the Ukrainian Air Force was sent there in February this year to "upgrade to the level of the MiG-29MU1." It did not happen categorically with the modernization, and first of all for the reason that the combat vehicle that arrived at the plant was instantly pulled almost a screw! Moreover, when the disappearance of the most important blocks of the fighter was revealed and an investigation was launched, it turned out that the marauders had already managed to get to other planes awaiting repair. Even the fact that the winged vehicles stood on the territory of the military commandant’s office located next to the factory did not save from theft.


The scandal erupted, and some details of the MiG-29 were simply thrown onto the lawn in front of the enterprise - away from sin. Be that as it may, but the MiG-29, which fell into the clutches of thieves from Ukroboronprom, is unlikely to fly into the sky in any modification, old or new. This example comprehensively characterizes the “successes” achieved by the management of the concern (and, in particular, Ruslan Korzh, who oversees the aviation and rocket science directions in it) in the matter of “radical transformation” and “getting rid of negative phenomena” of defense enterprises. What international cooperation (the need for which as a saving panacea for the Ukrainian aerospace industry at Ukroboronprom is declared at every step) can be discussed if total corruption among managers reigns, poverty among employees (the average salary of even engineering and technical personnel is approximately 14 thousand hryvnias, that is about 500 dollars) and the general theft caused by it?

There is still something to steal

The most interesting thing is that with all the deplorable state, Antonov is a profitable enterprise, which is rare for today's Ukraine. In 2018, the company managed to earn a billion “clean”, in 2019 - more than 800 million hryvnia. What are these amounts and where did they come from, we will explain in detail a little later, but for now let's get back to the main business of the company - aircraft manufacturing. Everything here is not just bad, but badly critical.

Back in 2016, the company was making very ambitious plans: it was about a dozen An-178 aircraft, which the Chinese Beijing A-Star Science & Technology Co., Ltd was supposedly ready to purchase, and a dozen of the same aircraft for the Azerbaijani airline SilkWay Airlines. Four An-4s and at least one An-148 were to fly to Iraq. Also, preliminary negotiations were held on the creation of more than fifty aircraft for various foreign customers, mainly from the Middle East. Moreover, the company rejoiced at the promises of long-awaited government orders - at least 178 An-3s were claimed by the Ukrainian army, on the purchase of even more aircraft equipment The Ministry of the Interior spoke. However, all this sweet “music” did not play, as the popular song says, for long ...

A year later, it became clear that the vast majority of the “protocols of intent” would remain empty dreams, not even reaching the stage of concluding official contracts. Neither the military nor the police will buy anything - there are no funds (those that are available are spent on the purchase of imported equipment and weapons). Foreign buyers, with the exception of Baku, also all as one, changed their minds. The reason here is extremely simple and just the continuation of the story with SilkWay Airlines, which led to a high-profile international scandal, reveals it. 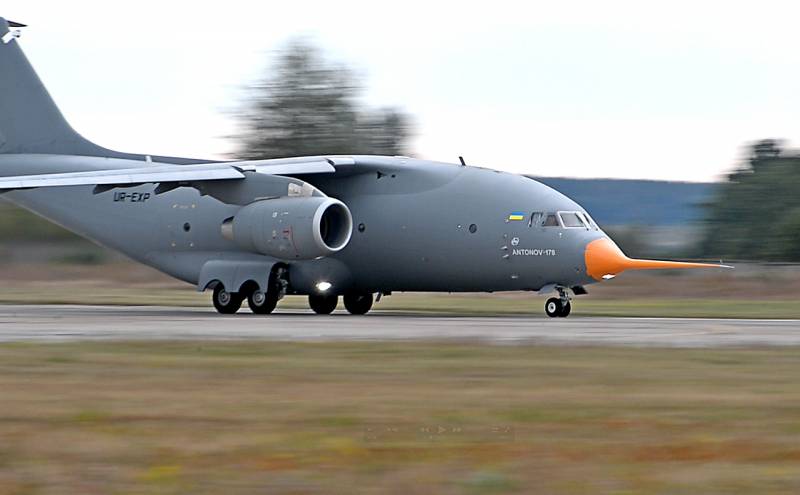 Short-haul transport aircraft An-178. Photo: Markedonich / wikimedia.org
Already in 2018, information “surfaced” in the media that it had not received the millionth (in dollars) advance from the Azerbaijani side of Antonov to deliver the promised An-178s at the originally declared price, and was not going to return the money transferred to it. This situation was due to the fact that the cost of these boards (and, most importantly, they were certified!) “Miscalculated” when signing the contract, taking into account the installation of Russian components on them, which Ukrainian aircraft manufacturers can no longer get. By virtue of which they are trying to almost double the price of their products, which Azerbaijan, of course, is completely unsatisfied. Well, and who after that will trust such "reliable" suppliers?

Over time, the story of the Azerbaijani contract somehow faltered, especially since the Antonov concern itself ceased to exist in 2017, and its enterprises finally turned into part of Ukroboronprom. At the same time, the only achievement of aircraft manufacturers over the past five years can be considered a contract with the national police of Peru for the supply of one copy of the An-178. True, the plane has not yet been handed over to customers, so there are still options, as they say. In any case, in the An-178 series, as promised, last year it didn’t go ... “So where do Antonov’s billions in profit come from?” - you ask. The whole point here is a rather large fleet of heavy cargo liners, which Antonova Airlines still has at its disposal, which actually contains the rest of the enterprise at the expense of its own earnings. “Mriya”, seven “Ruslans”, one or two units of An-22, An-26 and An-74T - with these “heavyweights” the Ukrainian airline feels rather well in the market of specific transportations, taking on the most heavy and bulky cargo. It is for control over them that Abromavichus and his relatives are leading a “battle without rules” today. However, not only.

“Antonov”, in addition to unique aircraft (which, perhaps, will still be profitable for some time even in the absence of normal maintenance, impossible without Russian components), this is also a huge production area (they can’t be small at the aircraft building enterprise) located in the city limits of Kiev. Behind them, or rather, the land plots on which these huge workshops are located, cunning metropolitan developers have been hunting for a long time. In light of this, statements recently heard from the lips of Ukroboronprom officials that the production of aircraft “must be taken out of the city” acquire a completely different sound. The company is well aware of how such initiatives will end in reality.

Aircraft manufacturers are simply thrown out not even into the street, but in a clean field. From “Antonov” there will be a company engaged in cargo transportation, and at best, one or two workshops for the repair of aircraft, which, in principle, are also capable of making some money, which can later be plundered by resourceful “defenders”. All this could be called paranoia, if not for the fate of such Ukrainian enterprises as the Electronmash, Bolshevik, Artyom, and Arsenal plants. All of them at one time were the flagships of the non-downstream industry, primarily the defense industry, and today they only have left signs (at best) and property pulled apart in pieces. From the scientific and production base, human potential in the form of highly qualified workers and engineering personnel, there is no trace left for a long time.

One of the last hopes of Ukrainian aircraft manufacturers, as, indeed, of many of their colleagues from other industries, was the arrival of large foreign investors in the company. However, “Antonov” was not very lucky here. In 2018, its representatives concluded an agreement on joint activities in a wide range of areas with ... the American corporation Boeing. What are all the intentions declared then by newly made "partners" from the USA today? I think it’s not worth explaining. This would save our own production, and not invest in someone else's land at distant lands! Boeing is currently carrying out unprecedented staff reductions in the United States itself, and for the first time in decades, its possible bankruptcy is being discussed quite seriously. Perhaps the only salvation could be the participation of the Chinese comrades, however, as the story with the Ukrainian Motor Sich enterprise showed, the Americans do not intend to allow representatives of the Celestial Empire to the Ukrainian defense industry even for a cannon shot. What do they say in Ukraine? “I myself won’t give a damn, and I won’t give it to another ...” Exactly this way everything happens. Well, if nothing changes in the most dramatic way (and there is not the slightest reason to hope for it), in the very near future we will only have to state the untimely death of the once glorious “Antonov”.
Reporterin Yandex News
Reporterin Yandex Zen
16 comments
Information
Dear reader, to leave comments on the publication, you must sign in.