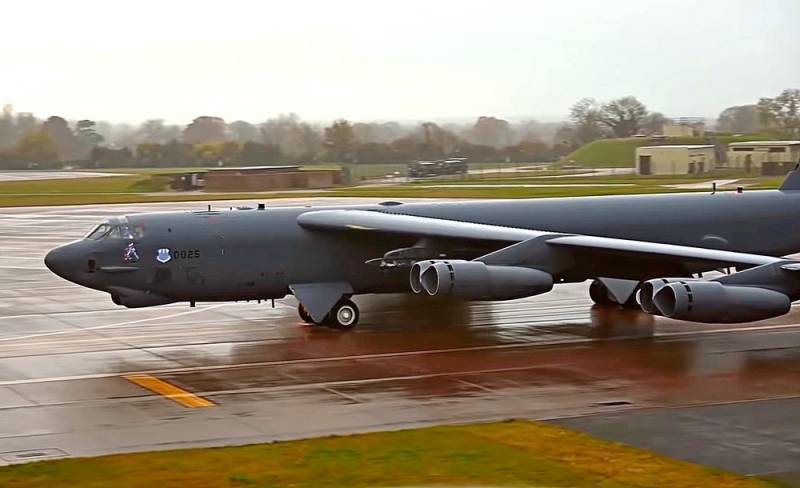 The militarization of the Arctic continues. The day before we toldthat the Kremlin made a decision to give our Northern Fleet the status of a separate military district, which should increase the effectiveness of its management and operational response to challenges. This was in response to the recent uninvited visit of American and British warships to the Barents Sea.


A similar escalation of military tension by the NATO bloc in our North cannot but cause concern. But if you wish, even in this you can find a little black humor. Somewhat amused, so to speak, “expert opinions” on this issue from Ukraine.

A few days ago, four American strategic bomber B-52H Stratofortress made a training flight around the Russian border from the Arctic Ocean. There they made "conditional missile strikes" against a certain enemy. Along the way, the aircraft refuel in the air, and were accompanied by the Norwegian Air Force F-16 and F-35 fighters. Jeffrey Harrigian, NATO Air Force Commander in Europe, said:

This is a strategically important region with growing geopolitical and global significance, and these missions of the bombing task force demonstrate a commitment to our partners and allies.

In general, this B-52H Stratofortress call from the territory of the North Dakota air base to our borders can be considered a continuation of the demonstration of the capabilities of American long-range aviation, as was the case with the B-1 Lancer bombers, flying directly from the USA to Crimea, which we told earlier. But this gave rise to the “hitting” of the so-called “military experts” of the Ukrainian edition of Defense Express.

In Independent Square, they immediately drew up a strategy for the US war for the Arctic, and at the same time Siberia. "Ukrainian experts" admired the capabilities of American cruise missiles on board the B-52H, which should be enough to tear apart the Russian air defense / missile defense system:

Enough to attack the main strategic targets of Russia in the Arctic and parts of Siberia.

According to Defense Express, only four U.S. Air Force strategic bombers are able, remaining outside the S-400, to destroy the Arctic military bases of the Russian Defense Ministry, the infrastructure of the Northern Sea Route, and at the same time launchers of ICBMs in Siberia. You’ll say nothing. It is not clear what the Pentagon has been pulling all these years, if everything is so simple. On this occasion, our Ukrainian "colleagues" from this publication would like to answer the following:

At first, Russia is not some unfortunate Libya. Above our country there is a comprehensive air defense / missile defense system. Neither 4 nor 44 aircraft are capable of finally resolving the “Russian question”.

Secondly, Russia is a nuclear power. Such a missile attack of the domestic military infrastructure will be considered a declaration of war, and will give occasion to use a nuclear arsenal. For some reason, the “Ukrainian experts” delicately took this parenthesis in their reasoning.

The truth is that countries such as the United States and Russia simply cannot afford to directly fight each other in full force, since this could end in a natural end of the world for all. Therefore, the Pentagon uses as its "proxies" those whom it is not very a pity: Georgia, the Baltic states, Ukraine itself, which will receive all the bumps if something happens. This is what Defense Express is keeping quiet about, preferring to have a good time.
Ctrl Enter
Noticed oshЫbku Highlight text and press. Ctrl + Enter
We are
Ukraine from the inside: traitors, curators and those who watch from the Kremlin
Ten "defeats" of Putin
Reporterin Yandex News
Read Reporterin Google News
4 comments
Information
Dear reader, to leave comments on the publication, you must sign in.