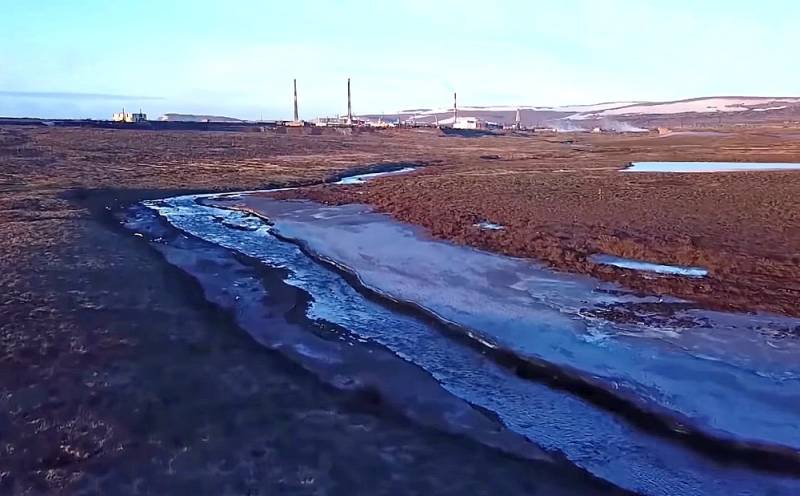 2020 was only half past, but it was already full of extreme events, in the most unsightly light exposing the domestic management system. This is the “oil war”, which lasted six weeks instead of six years, and the coronavirus pandemic, in the framework of the fight against which a kind of “self-isolation” was introduced instead of the emergency mode. The accident at the Norilsk TPP-3 is essentially a link in the same chain.


Recall, on May 29, at the CHPP-3 tank, literally “the bottom was torn off”, and 21 thousand tons of diesel fuel leaked, polluting the soil and water of the Ambarnaya and Daldykan rivers. At the moment, this is probably the largest environmental disaster in the Far North. A “guilty party” has already been found - a certain Vyacheslav Starostin, the head of the CHPP-3 workshop, who will ultimately answer in all severity. He is charged with negligence due to the fact that the authorities were not promptly notified of the incident.

Well, the responsibility of an official cannot be denied, but is it one thing? Let's try to trace the entire logical chain from beginning to end.

In the days of the USSR, the Far North was the place where many sought to get and work, despite the harsh climate. The Norilsk industrial region gave the country nickel, copper, cobalt, platinoids. Workers received high salaries and were provided with quite comfortable living conditions for the region. The "atomic bomb" was planted in 1993, when President Yeltsin signed a decree on the transformation of the Norilsk Nickel State Concern into a Russian joint-stock company. Further, through a mortgage auction, a unique enterprise instead of its labor collective fell into the hands of ONEXIM Bank for $ 170 million.

So there were two prominent Russian oligarchs - gentlemen Vladimir Potanin and Mikhail Prokhorov. Later Prokhorov was replaced by the oligarch Deripaska, known for his proximity to the Kremlin, and Roman Abramovich also took part in the fate of the enterprise. Today, the key figure at Norilsk Nickel is billionaire Vladimir Potanin, the richest man in Russia as of 2020 according to Forbes, who had to answer President Putin for the environmental disaster.

If we return to the emergency situation, the following happened: the storage for the CHPP-3 was depressurized (the wording “the bottom has come off” appears), tens of tons of fuel poured into the soil and into adjacent rivers. The head of the shop, Starostin, is accused of not having notified the special services of the spill on time, showing negligence. The cause of the tragedy is called "climate change", which led to the thawing of permafrost and the violation of structural strength. It is curious that initially even the version about a certain car that allegedly crashed into a tank appeared, causing a disaster. After she was refuted.

Yes, untimely notification of the Ministry of Emergencies and the authorities about the emergency is a real “cant” of the shop manager, but there are two counter questions.

Firstly, in what condition was this tank in general, what was the degree of its deterioration, where did the “effective private owner” and its “effective managers” look?

Secondly, where did the numerous inspection authorities look? In order not to notice the deterioration of the structure, which is a source of increased danger, and the melting of permafrost, you need to look somewhere to the side. The fact that the head of state learned about the incident from social networks can indicate either the inconsistency of the officials of the position or an attempt to hide the incident.

It turns out an unsightly logical chain: “effective private owner” + “effective managers” + ineffective officials = a certain average formula for disaster. It is noteworthy that the state now bears the main burden of raking up the consequences of the accident, despite the assurances of the oligarch Potanin.

Unfortunately, this emergency is not something unique. I would like to recall the accident at the Sayano-Shushenskaya hydroelectric station in 2009, which led to the death of 75 people. It will be useful to recall the conclusions of the Parliamentary Commission about its reasons:

The accident at the SShHPP with numerous casualties was the result of a number of reasons of a technical, organizational and regulatory nature. Most of these reasons are systemic multifactorial in nature, including unacceptably low responsibility of operating personnel, unacceptably low responsibility and professionalism of the plant management, as well as abuse of official position by the plant management. Permanent monitoring of the technical condition of the equipment by operational and repair personnel was not properly organized.

11 years have passed since then, but, apparently, absolutely no conclusions have been made. One can only guess where the "bottom will come off" next time.
Ctrl Enter
Noticed oshЫbku Highlight text and press. Ctrl + Enter
We are
Oil prices: how Russia outwitted the whole world
Three years left: Ukraine will be sold in parts
Reporterin Yandex News
Read Reporterin Google News
18 comments
Information
Dear reader, to leave comments on the publication, you must sign in.