200 tons of failure: why Hitler's Mouse tank was a huge mistake 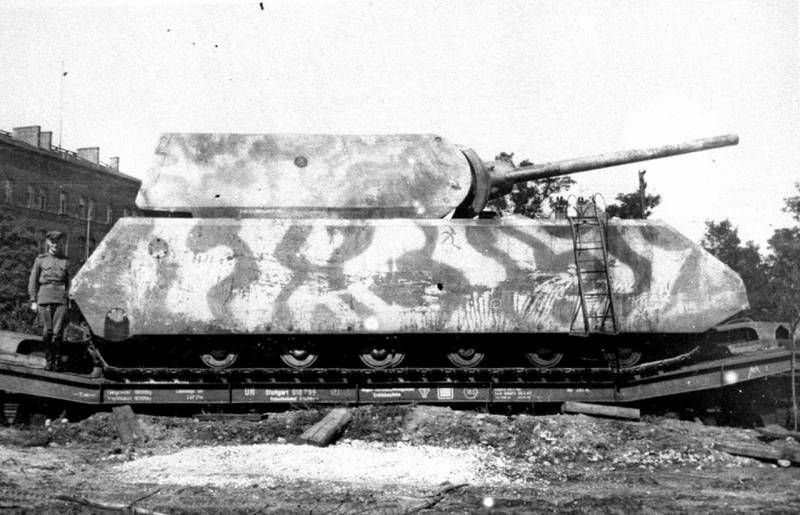 The project of the almost 200-ton tank of Nazi Germany Maus ("Mouse") was a huge mistake, writes the American analytical publication The National Interest.


Back in 1941, the German high command developed the military Technologywho are far ahead of their time. Many innovative concepts have become a reality. If some of them were realized faster or in larger numbers, then World War II would have lasted much longer or completely changed its course.

Many of these "wunderwaffes" were very practical and became the starting point of modern military arsenals (assault rifles, ballistic missiles, jet aircraft, and much more). But there were strange concepts, such as the 189-ton Panzerkampwagen tank (PzKpfw.) VIII Maus, developed by Porsche at the direction of Hitler himself.

Attempts to create a superheavy indestructible combat vehicle began in 1941. In March 1942, Porsche received a contract for a new 189-ton tank, which was supposed to be equipped with a high-speed 105-mm gun L / 60 or L / 72 and have ammunition for 100 shells.

The production was personally monitored by Professor Ferdinand Porsche, who designed the chassis, and Krupp was responsible for the development of the hull, turret and weapons. The military approved the project and a working prototype of the tank was supposed to appear in the spring of 1943. However, then they began to make changes to the initial project and experiment with various layouts. 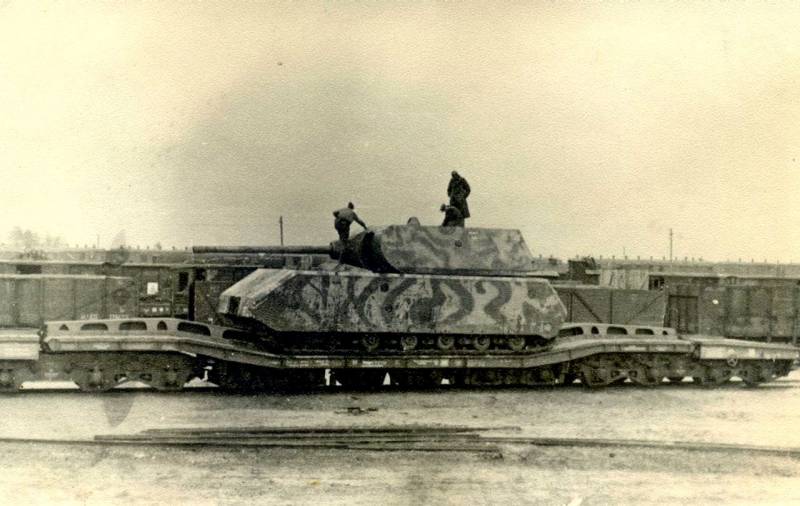 After that, Porsche postponed the deadline for the delivery of the first sample for the summer of 1943, specifying that it would be able to collect no more than 5 Maus units per month. At first, the combat vehicle was called the Porsche Type 205 VK10001 Mammoth, but in December 1942 the tank was renamed Mäuschen (Mouse). Three months later, the tank received its final name - Maus (Mouse).

In October 1943, Hitler canceled the initial order for 150 tanks, and on November 4 ordered to completely stop the development and make only one copy for re-evaluating the project.

On December 24, 1943, the first prototype of the Maus V1 appeared. Due to its enormous weight, the tank barely reached a maximum speed of 13 km / h. It became obvious that the installed modified Daimler-Benz MB 509 engine (developed on the basis of the DB 603 aircraft engine) does not allow to reach the planned speed of 20 km / h.

By the summer of 1944, a second prototype appeared - the Maus V2. It was slightly different from V1. Version V2 was equipped with a 128 mm KwK 44 L / 55 gun, a coaxial 75 mm KwK 44 L / 36,5 gun and a 7,92 mm MG34 machine gun, which provided the tank with enormous firepower. The main Maus gun pierced the front, side and rear armor of the American Sherman, British Cromwell and Churchill, as well as the Soviet T-34 and IS-2 at a distance of more than 3500 meters. His own armor was almost 18 cm thick, and in the frontal part of the hull even reached 35 cm. 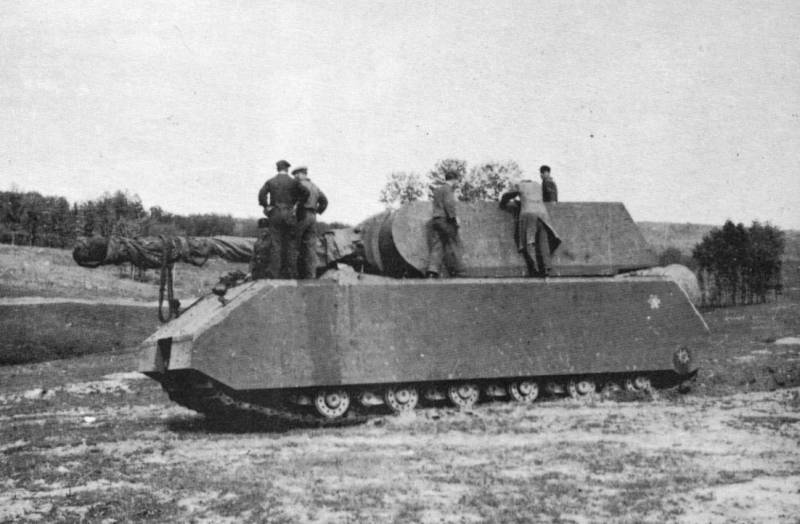 In September 1944, tests began on the Maus V2, on which the Daimler-Benz MB 517 diesel engine was installed, although this did not greatly improve the initial maximum speed result. The new chassis of the tank was developed by the Czech company Skoda. At the same time, the height of the tank was 3,5 meters, which made it, to put it mildly, well noticeable.

The Maus V2 has an auxiliary power unit and a system that allows you to seal the crew compartment, making it possible to dive when moving along rivers, as well as reliable protection against gas and chemical weapons. The tank had to cross rivers up to 14 meters deep, because most bridges simply could not withstand its weight. However, in reality, the maximum immersion depth was 7,6 meters, which, however, was also a record for that time.

From January to October 1944, Maus was tested at the Kummersdorf training ground near Berlin, and then at the Porsche Test Ground in Boeblingen. The tests were lengthy, as they were complicated by problems associated with the engine, as well as the ongoing bombing of factories manufacturing components for the tank. 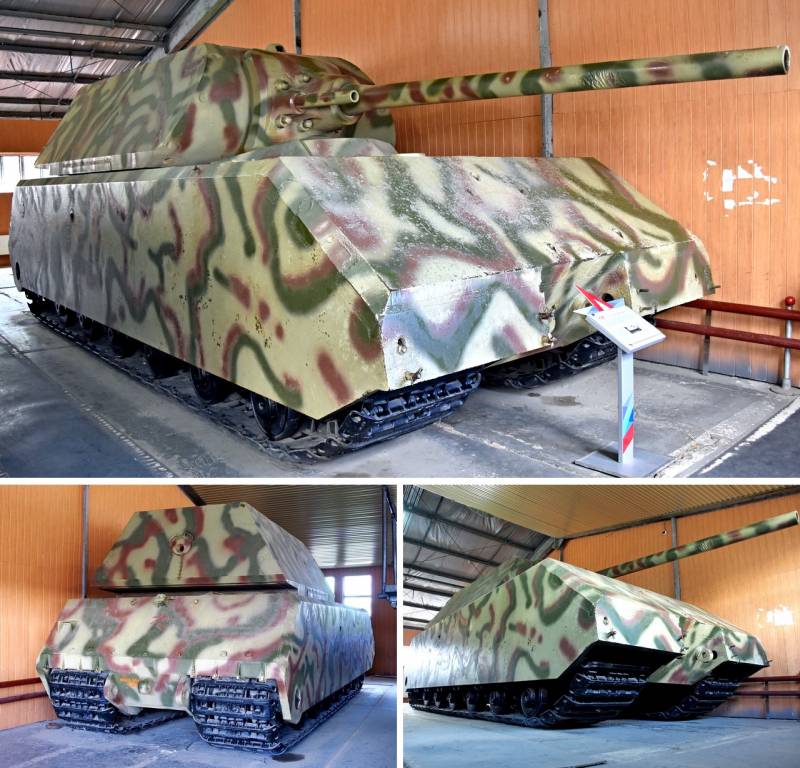 According to the Germans themselves, the finished prototype of the tank was destroyed. When the war ended, an almost completed V1 tower and hull were found at the Krupp concern in Essen. Now the combat vehicle is in the Armored Museum in Kubinka, in the suburbs.

Maus might have had limited success on the battlefield, but at the end of the war he greatly depleted Germany's engineering, manufacturing, and material resources when the country needed them most. This tank was too large, vulnerable and slow, and could not be implemented on the basis of the technologies available at that time.
Reporterin Yandex News
Reporterin Yandex Zen
1 comment
Information
Dear reader, to leave comments on the publication, you must sign in.