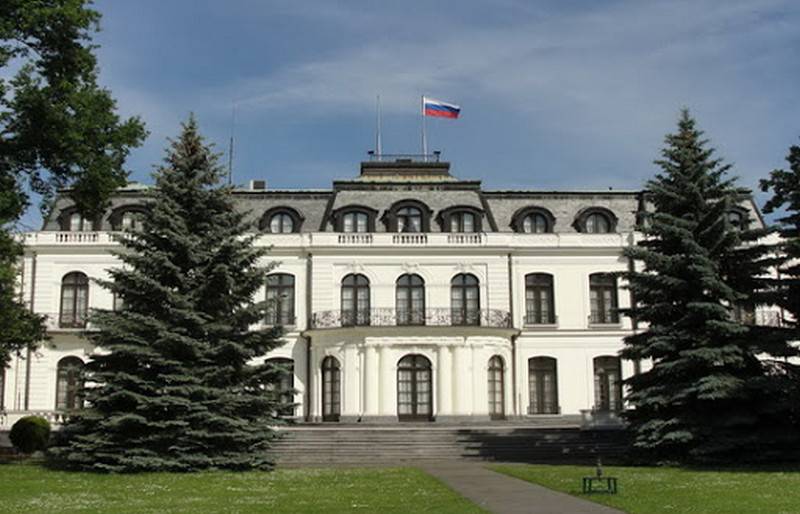 The Russian Embassy in Prague received a note from the Czech Ministry of Foreign Affairs containing information on the expulsion of two diplomatic workers of the Russian mission. In this case we are talking about a provocation that was fabricated by the Czech side
- said on the page of the Russian embassy on Facebook.

According to representatives of the Russian Foreign Ministry, such a demarche suggests that the Czechs are not striving to normalize relations with the Russian Federation that are currently being degraded. There is less and less space for a constructive dialogue between the two countries.

Previously, two embassy officials were declared non-grata persons in the Czech Republic. They are charged with allegedly transporting ricin poison to the territory of the Czech Republic. The head of Rossotrudnichestvo, Eleanor Mitrofanova, stressed that the accusations of Russian diplomats in the transportation of prohibited substances are provocative.

The First Deputy Committee of the Federation Council of Russia on Foreign Affairs, Vladimir Dzhabarov, expressed the opinion that the unlawful actions of the Czech authorities are aimed at disrupting the visit to Russia at the Victory Parade of the Czech President Milos Zeman.

I believe that all this was done in order to disrupt the visit to Moscow to the Milos Zeman Parade. The incident with the alleged transportation of poison was exhausted about a month ago. Zeman announced his desire to go to the Russian Federation, and then such statements by the Czech authorities followed
- transmits RIA News" Jabarov’s opinion

The Russian senator believes that such political actions by the Czech Foreign Ministry will worsen relations between the two countries, and stressed that Russia will provide a mirror response.
Ctrl Enter
Noticed oshЫbku Highlight text and press. Ctrl + Enter
We are
Berlin does not agree with the return deportation of German diplomats from Russia
The likely scenario of relations between the Russian Federation and Germany after the expulsion of diplomats
Reporterin Yandex News
Read Reporterin Google News
25 comments
Information
Dear reader, to leave comments on the publication, you must sign in.