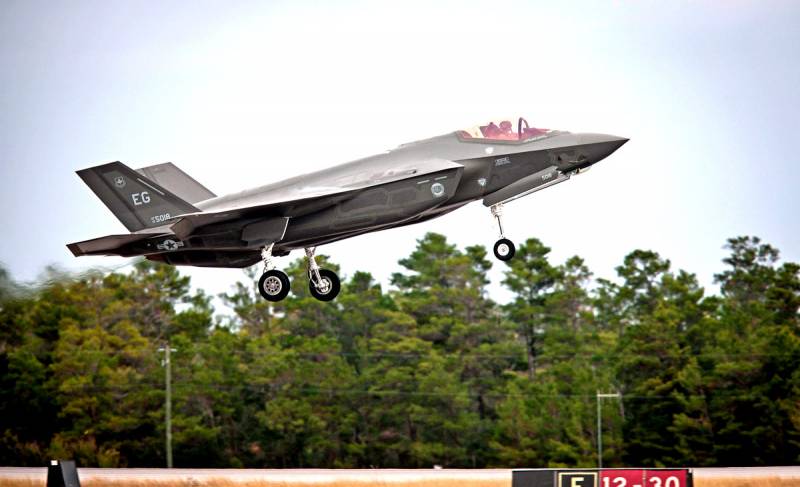 While the jolly crowds of protesters smash the United States to the extent that it has not become "great again" in the hands of Donald Trump, serious corporations in this country are also doing things, frankly, not so hot. No, American aircraft giants are not attacked by marauders, but they already have enough problems.


Moreover, extremely difficult times seem to have come both for Boeing Co., which specializes mainly in passenger airliners, and for the aerospace corporation Lockheed Martin, whose business interests extend more in the military sphere. Each of the companies has its own “headaches”, but both of them more than have gotten cause for concern.

That "stealth" breaks, then the tail falls off ...

In the past month, in the United States over the course of some five days, two catastrophes of fifth-generation multipurpose fighters occurred, which are the pride and subject of far-reaching plans and great hopes of Lockheed Martin. On May 15, the F-22 Raptor crashed, and on May 19 the “newest and best in the world” F-35A Lightning II crashed. Typically, both incidents occurred with pilots deployed at the US Air Force base Eglin in Florida. In the first case, we are talking about the 43rd fighter squadron, belonging to the oldest units of the military aviation of the US Army and, mind you, carrying out "advanced training of pilots for the F-22." The second fighter was listed behind the 58th squadron of the 33rd fighter wing of the US Air Force, where, in theory, the “yellowhorns” are also not kept. This means that it is unlikely that it will be possible to blame accidents solely on “pilot errors”.

For manufacturers of military vehicles, everything that happened is not only very unpleasant, but also extremely untimely. After all, the information painful for Lockheed Martin that the Pentagon imposed the strictest ban on F-35 Lightning modifications of B and C at supersonic speeds, widely circulated by the American and world media, has not yet been forgotten. And now there are two consecutive plane crashes. As for the ban, it is caused by the fact that multi-role fighter models that are designed for use by the Navy and the Marine Corps, as shown by in-depth tests, can withstand no more than 50 seconds of “supersonic”. Then from them, bubbling, the vaunted “stealth coating” begins to peel off to shreds, which, in fact, is the main advantage of this aircraft. Next comes the turn of the aft communication antennas, well, and with particularly strong heating of the skin, the tail unit of the fighter can also fall off. True, analysts were found right there who began to argue that the inability to withstand high speeds is not at all a critical drawback of the F-35, but almost a “tactical advantage”. True, it sounds somehow, frankly, unconvincing ...

In addition to all this, potential partners, the Indian Air Force, planted a serious pig for the corporation. More recently, in an effort to modernize and improve its own fleet, New Delhi was negotiating the purchase from Lockheed Martin of a serious batch (at least 40 units) of F-21 fighters. In fact, these combat vehicles were supposed to be a “deep modernization” of the good old F-16, specially “sharpened” for export and intended exclusively for Indian pilots. The manufacturing company vowed to stuff these planes with "stuffing", which would bring them as close as possible to the "fifth generation" - radar, control and communications, and other electronics.

Nonetheless, the Indians suddenly got into a mess and said that they had “made a final decision” with respect to choosing American “miracles” equipment»Own production aircraft - LCA Tejas. Four dozen of these machines have already been ordered and paid, and now in the army leadership they decided to increase the number of purchased fighters by another 83 units. The reason for this choice, among other things, lies in a more than tangible price difference - each Tejas will cost the Indian treasury about $ 50 million, which, of course, is incomparable with the numbers voiced by Lockheed Martin, who never sells anything cheap to anyone. The pandemic hit the corporation anyway, questioning the timeliness of fulfilling contracts for the same F-35s, and then there was such a nuisance, even against the background of disasters. According to reports, after the events in Eglin, some of the potential buyers of the F-35 took a deep thought. For example, the Israeli Air Force, having already ordered 50 of these machines and considering the acquisition of another 25. The plane crashed on May 19 was already the third “best in the world” crashed. At the price of these fighters, there is food for thought.

Finishing the conversation about Lockheed Martin, it remains only to note that another joyless for them news came recently from Europe. There, representatives of the Bundeswehr made a statement that the air forces of Germany, France and Spain finally agreed on all the details about the Future Combat Air System (FCAS) program to create their fifth generation fighter (NGF). By 2040, he will have to replace the EU squadrons that are now on guard over the skies of Rafale and Eurofighter, which are pretty obsolete both morally and physically. For American manufacturers of military aircraft, this means that the Old World market for them is almost lost. As well as appetizing budgetary appropriations for relevant items within NATO.

Hopes that the Europeans, as often happens, quarrel or drown a concrete solution to the issue in endless debate and talk, did not materialize. However, this is far from the only and, perhaps, not the main victory of Airbus Corporation, which is taking an active part in creating the “European fighter of the future”. To prevail over the decades-old main and extremely dangerous rival Boeing concern for them, perhaps, was more important. Today, despite the fact that aircraft builders on both sides of the ocean are experiencing difficult times after the pandemic crisis, Americans are doing much worse, sliding more and more to the brink of disaster. It did not help even that in Boeing Co. Last month, they made a rather unexpected announcement - about the resumption of production of the ill-fated 737 MAX model, which began to drive its own manufacturers into huge losses long before the pandemic.

The decision was made by Volt Odisho, vice president of the company and general manager of the 737 MAX revival program. According to him, the assembly of these airliners will be launched “in small volumes and at a low pace” with the prospect of “increasing production already this year.” In a word, so far “slowly and sadly,” and then how it goes. True, it is not entirely clear how these optimistic plans correlate with the sharp and large-scale reduction in own personnel that began in the corporation. In the last days of May, her leadership announced the intention in the near future to “send on unpaid leave” at least 2 and a half thousand employees. However, these are only flowers. During the first weeks of June, Boeing Co. intend to get rid of, at the very least, 10% of its currently totaling 160 thousand people. More than 5 and a half thousand employees will leave the company “voluntarily”, receiving decent severance pay as an incentive. More than 6.7 thousand people will be subjected to "forced reduction". Out of 18 thousand, those who work for Boeing outside the USA (in Australia, New Zealand, Canada), dismissal is still “shining” to seven hundred workers. However, apparently, the matter may not be limited to their departure. At the same time, as far as we know, significant reductions are expected not only by the central and regional offices, companies, but just by its production units located in the Seattle area. It is not yet clear which of the enterprises the layoffs (and, consequently, the reduction in the work performed) will be larger - in Everett or in Renton, where the 737 MAX was produced. It is possible that the mention of him will remain in the past tense.

In fact, for Boeing, as well as for Lockheed Martin, the only real “life buoy” could be cooperation with the Pentagon. Recall, this corporation produces for the military the Air Force tanker KC-46 Pegasus and the aircraft for naval aviation P-8 Poseidon. Their production was also stopped due to the coronavirus pandemic, but at least there is hope that the existing orders will not be canceled and they will be paid. Regarding passenger liners, the prospects are much darker. Europe in the crisis will quite naturally support exclusively its own aircraft manufacturers, primarily Airbus, which is already the leader in the race by a fantastic margin - last year the company sold 11 times more planes than the Americans. Hope in the domestic market (after all, in the USA it is rather big) is more than illusory. American Airlines Group Inc., which is the largest airline in the country, said it was forced to go on massive layoffs almost simultaneously with Boeing. Initially, we are talking about reducing a third of the administrative and managerial staff. First of all, 5 of those whom the company considers as “support staff” and managers, without whom, in general, can be dispensed with, will be shown the door. Those in American Airlines counted as many as 17 thousand. Of course, they will try to keep the flight crew to the last, but that’s how it goes. In any case, the airline’s vice president of public relations, Elise Eberwain, honestly admitted that "in the foreseeable future" she is likely to "turn into a much smaller company."

Against the backdrop of the real “space breakthrough” of the United States, made, however, by the efforts of a private corporation, the situation in their aircraft industry looks, frankly, quite depressing. About whether any steps are expected from the state in order to support, and actually save from collapse this important industry, is still unknown. However, Donald Trump, who was forced to hide in the bunker from the rebels who had already reached Washington, now, most likely, is not up to it. True, then it may be too late.
Ctrl Enter
Noticed oshЫbku Highlight text and press. Ctrl + Enter
We are
Peace enforcement operation. Russia inflicts a preemptive strike on Kiev
US Global Economy: An End That Sneaks Noticeably
Reporterin Yandex News
Read Reporterin Google News
15 comments
Information
Dear reader, to leave comments on the publication, you must sign in.