USA on fire: a “social explosion” that could not fail to happen 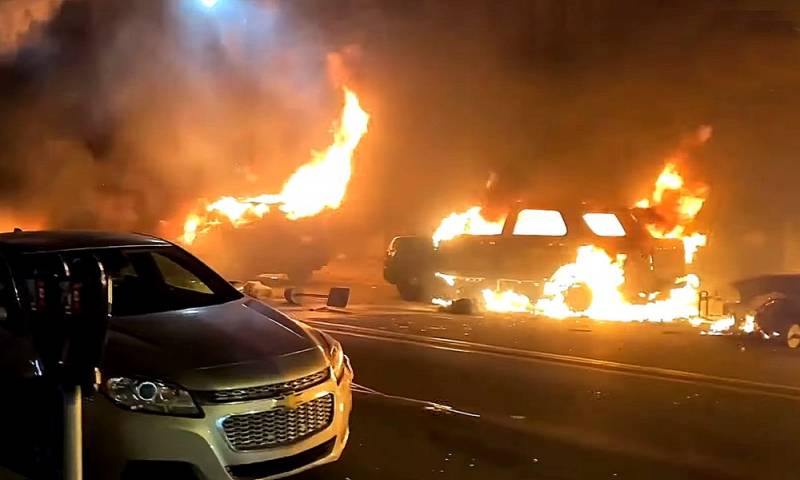 The United States is on fire. The country is blazing with spontaneous riots of a scale that she did not know in all the past decades. Flames of Denver, Detroit, Houston, Los Angeles, Miami and even Beverly Hills. Protesters reached Washington and, in fact, attempted to storm the White House. For several days now, shots have been heard and victims, as far as is known, are on both sides of the "barricades".


What is happening in the USA - more or less usual for them, speaking out against police arbitrariness, having a racial color, something “meaningless and merciless”, a booze whose meaning is not clear even to its members or what should have happened absolutely inevitably as soon as it turns up suitable occasion?

System errors: one worse than the other

It is impossible not to admit that the authorities - both local ones, the cities of Minneapolis, and the state of Minnesota, with which the bloody butch began, which today turned into a nationwide and federal level, did, without exaggeration, do everything possible to make this happen. Let me remind you - the first protest that took place at the site of the brutal "detention" of black George Floyd, who, strangled by a local police officer, died in the hospital without regaining consciousness, was a completely peaceful action. The next day, at the ill-fated crossroads, people just stood with the placards “I can’t breathe!” and “It could have been me,” even observing the “social distance” prescribed by the quarantine rules. Yes, and there were still only a few hundred. Floyd died on May 25, on Monday, the public was outraged (so far non-violently) on Tuesday.

On Wednesday, there were already thousands of demonstrators, and stones and bottles were flying to the police with might and main. The situation was clearly tense, and rapidly. The crowd stormed the Minneapolis police station on Thursday night - after it became clear that the perpetrators of the incident were likely to get off with a “slight fright”. Yes, all four "distinguished" cops were immediately defeated by our service. However, the local Association of Police Officers stood up in defense of their own colleagues (albeit former ones) and began to claim that the incident "still needs to be sorted out" (well, yes - suddenly Floyd broke his own neck, like the Gogol widow who had carved herself! ), wait for the "results of the examination" and so on. And this despite the fact that everything that happened was in excellent quality captured on video and had a lot of witnesses. Yes, and officer Derek Chauvin, clearly exceeding the limits of the permissible use of force, was clearly not an adornment and pride of law enforcement agencies - only 17 complaints were filed against him, almost one for each year of service ...


Donald Trump very “successfully” reacted to the events, as usual splashing a gasoline into the fire. Communicating with the nation, as always, via Twitter, he first mumbled something about a “quick and objective investigation”, and the very next day he called the protesters “bandits”, threatening them with troops and shooting to kill. It was then that the protesters themselves started shooting ... And here again it is impossible not to note that all the conditions for this were created, again, by the US authorities.

At the very beginning of the pandemic, when the question of which stores in the country will be allowed to operate due to the fact that they sell essential goods, the arms shops were going to hide from sin. However, the all-powerful, practically in the USA National Rifle Association of America - American Shooting League immediately entered the case. “Yes, there, in your Congress, you started moving your mind ?! You don’t respect the second amendment to the Constitution ?! ” - followed a formidable shout, in which the clang of distorted shutters was distinctly heard. Legislators instantly realized that contacting here is definitely more expensive for themselves, and entered sales outlets for the sale of weapons and ammunition in the list of "critical infrastructure facilities", which should not be closed in any case. As a result, the number of citizens who began to sweep the “trunks” off the shelves and order them via the Internet (in the USA, this is quite common), has increased many times over. The starting point for more or less objective statistics can be the officially recorded number of Americans who applied for the appropriate permits. In some states, compared with the same period last year, it jumped by 200 percent. At the same time, not even shotguns were in special demand, but pistols and civilian “clones” of the Army M-16 — AR-15 semi-automatic rifles. It was their pandemic brought to panic by the townsfolk who rushed to buy hundreds of thousands.

Revolution on an empty stomach

The most famous statement by Anton Pavlovich Chekhov regarding the fact that the gun hanging on the stage in the first act will certainly “bang” in the second, as has long been proved, is true not only for the stage. Many arms dealers who shockly supplied them with fellow citizens during the quarantine period noticed that this time those who had not even intended to have them were drawn to the “trunks”. What for? “And just in case! Times, you know, troubles come, everything can happen ... ”So it happened - the“ gunshot ”in total with mass hysteria, and even multiplied by more than real economic and, as a result, social problems are explosive combinations. What is characteristic, in the protests that began and in many ways continue with the name of the black George Floyd, very original and extremely disturbing moments very quickly began to crystallize.


Firstly, such cases in the USA are far from being the first or even the second time. In the end, African-Americans regularly "fall under the distribution" of local cops, often with a fatal outcome. In the same New York in 2014, Eric Garner was strangled about the same way during his arrest, and his killer did not suffer real punishment. George Floyd, Ahmad Arbury, Breoni Taylor ... The list could be continued, but the matter is not in quantity, but in the fact that usually such tragedies were able to stir up people in one city, at most in several cities of the state. But do not “blow up” the whole country in a matter of days. Secondly, among the protesters today, a lot of people are not at all with a dark skin color - the situation has gone far beyond the framework of the "racial conflict", which the US will not surprise. It is very likely that this is precisely a rebellion against the government - not a small-town in the person of a sheriff and mayor, but a challenge to the System throughout the state.

And finally, in the third - in many places, performances very quickly develop into the most natural pogroms, accompanied by looting and mass robberies. In the same Minneapolis, either “taking revenge on Floyd,” or simply deciding to “take a break” on occasion, the townspeople smashed the main shopping street to smithereens, literally destroying all the establishments located on it - from Target department store to fashionable ones that fell under the hot hand fitness clubs. For some reason, only the automatic laundry was spared. In Los Angeles, the famous Santa Monica Boulevard suffered exactly the same defeat. Broken police cars and set fires - the third thing. The crowd is increasingly beginning to become a part of the “looter” taste, starting with an extremely bad interest in looking not only at shopping centers and supermarkets, but also at rich neighborhoods. Is there any connection with the fact that last week more than 2 million Americans were forced to apply for unemployment benefits and, thus, the number of citizens of this country who found themselves without a livelihood reached a record figure of 40 million people? Here everyone is free to judge for himself, but, in my opinion, the connection is more than obvious. The government’s desperate attempts to “plug” this social gap, which is becoming more and more gaping, with the amounts distributed to people from the budget, it seems, they are not able to fundamentally turn the tide. First, a thousand, one and a half, or even 2 thousand dollars, by the standards of the United States, are not at all the amount that we have. You don’t really take it easy. Secondly, all more or less sensible Americans understand very well: no one will feed them ad infinitum just like “you live great.” We need work, we need stability, we need prospects. But just them in the near future and is not expected.


Speaking recently in the Senate Banking Committee, Treasury Secretary Stephen Mnuchin allowed himself to say that "the United States will emerge from the coronavirus pandemic more than before." It sounds impressive, only Mr. Mnuchin has forgotten about his own words said two weeks earlier - that if the quarantine measures are “a little longer”, then the American economy will simply be “destroyed”. Now this is more like the truth. According to reports, the country is experiencing a wave of bankruptcies, which has not been equal since the recession of 2009. In the first five months of this year, about a hundred American companies declared themselves insolvent debtors, the volume of credit obligations of which is $ 50 million. For example, JCPenney Co. went bankrupt. - One of the oldest department store chains in the United States, with more than a century of history. Neiman Marcus Group Inc. also went bankrupt. (a network of "luxury" department stores), J.Crew and several other American retailers. And just this for the United States - a very alarming signal. Burning shops indicate that citizens' pockets are empty. Jerome Powell, who heads the US Federal Reserve System, whose word to a certain extent can be considered even more powerful than Mnuchin's statements, does not share the optimism of the head of the Ministry of Finance. According to his forecast, announced on May 18, the unemployment rate in the country could reach 25%, and GDP could fall by 20-30%. The most unpleasant thing is that Mr. Powell described these problems as a 2 quarter perspective, however, as said above, having exceeded the mark of 40 million, the unemployment rate has already reached the maximum level announced by him today. What's next? It's time to remember that analysts at the JPMorgan banking group predicted a drop in GDP in the same quarter at a minimum of 40%.

At the time of this writing, riots in the United States are becoming increasingly serious. Because of them, curfews were imposed in 25 cities in sixteen states. In turn, Donald Trump, in the opinion of his own compatriots, was largely responsible for the pandemic in the country according to the most catastrophic scenario, and declared the Antifa movement and “other left-wing organizations” to blame for everything that happened. We are waiting for the statement about the “Russian trace” ...
Ctrl Enter
Noticed oshЫbku Highlight text and press. Ctrl + Enter
We are
“With Russians it’s worth playing fair or not playing at all”
Where is Russia going?
Reporterin Yandex News
Read Reporterin Google News
18 comments
Information
Dear reader, to leave comments on the publication, you must sign in.