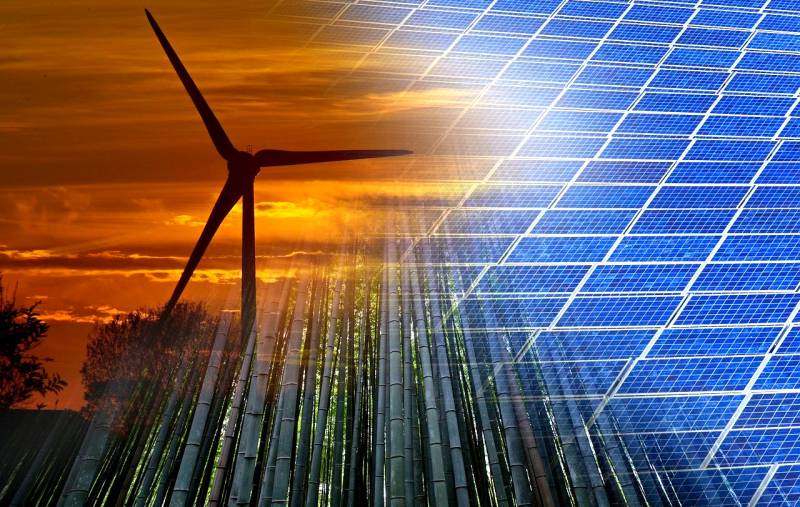 The global COVID-19 pandemic brought to our country all the same troubles and trials as the vast majority of the world's states. Today, when the peak of the spread of the disease and the fight against it, apparently, is behind us, someone is inclined to exaggerate the damage done by the Russian the economy a pandemic and the crisis it caused on world energy markets, someone, on the contrary, downplayed. In fact, such estimates are likely to be premature.


At the moment, with full confidence we can talk only about one thing: Russia managed to save the most important thing - human lives. This is evidenced by the domestic mortality statistics from COVID-19, causing malicious envy in many in the world. However, there are fears that the main and most global problems, one way or another connected with the coronavirus, are still ahead of Russia.

The global disaster that has hit the world, in fact, overshadowed a truly historic event that occurred at the end of 2019. We are talking about the adoption by the Old World of the so-called European Green Deal (EGD) - the "European Green Deal", officially formalized at the December summit of the EU Heads of State. The corresponding “program” document, signed during the meeting, is very multifaceted and extensive, therefore, we restrict ourselves to only the briefest “squeeze” of its main provisions. In accordance with the declared “green” course, by 2050, Europe should become the first “carbon-neutral continent” in the world. That is, any and all industrial emissions into the atmosphere harmful for the environment and leading to global warming, CO2 will be stopped.

At the same time, not only industry, but also energy, transport, urban infrastructure should be switched to "green" rails that are completely harmless to nature. Death to power plants burning fuel oil and coal in their furnaces! Down with cars with internal combustion engines! You give cars exclusively on electric "traction", and the generation of electricity itself - only in "clean" ways, it is highly desirable due to renewable sources, such as sun, air (windmills) and water (using tidal waves). A kind of elven "paradise", gracious, sterile and with portraits of St. Greta at every turn ... However, the aggressive Scandinavian teenage girl, who was completely grown up, turned into a "banner" and an "icon" of the most radical environmental sects, in this case there is a serious a competitor in the face of a completely adult and sensible aunt. We are talking about Ursule von der Leyen, who took over the post of head of the European Commission last year, who was imbued with environmental ideas to the point of "complete greening."

It is clear that the German Frau dreamed, having stood at the origins of the revolutionary process of reorganizing Europe, to build on this political a career for decades to come. True, at the same time, all the “brilliant” “promoted” by her prospects initially had a very unpleasant downside. Namely, their cost. Most enthusiasts, whose hymn could begin with the words “We will build our“ green ”world ...” somehow do not think about how to drive all of humanity, or even some part of it, into the “bright ecological future” that they see - the idea is quite expensive. But Frau von der Leyen was well aware of this, initially not hiding that only the first years of 6-7 “greening” of Europe would require at least a trillion euros of “green investments”. Then how it goes ...

Moreover, within the framework of the so-called “Fair Transition Mechanism” or The Just Transition Mechanism (JTM), it was planned to allocate perhaps a little less astonishing amounts (hundreds of billions of euros) for financial assistance to those European regions and states that would be hit by total “greening” most of all, mercilessly crushing and distorting their lifestyle and entire sectors of the local economy. In a similar way, it all looked, so to speak, in the first approximation, but here ... That's right, as in the old joke, COVID-19 came. At the same time, he didn’t expel anyone anywhere, but, on the contrary, quarantined hundreds of millions of people around the world, at the same time sending the European economy into the deepest decline and recession. What, to the green grandmother, ecology ?! Today at the summits of EU leaders, questions are discussed about how many billions and trillions of euros must be “thrown” in order to save both the financial and economic system of this community and its interstate formation from complete collapse.

Coronavirus endured? And the green deal will endure!

The pandemic, according to experts, caused the European economy losses of "cosmic proportions." The total public debt of the eurozone countries this year will exceed an average of 100% of their GDP. For some particularly affected countries, such as Italy, this figure may be even sadder - 150-160%. Director of the International Monetary Fund Kristalina Georgieva in mid-May said that the situation in the world economy was "much worse than the most pessimistic forecasts", which were voiced by the specialists of her organization. So what - can you forget about the “green deal” and other “elven fantasies” of the same kind, at least until the end of the crisis and the recovery period that will inevitably follow? Do not rush to conclusions.

The main "environmental mouthpiece" of the planet, not even appeasing in quarantine, Greta Tunberg ... warmly welcomed the coronavirus pandemic! On the eve of Earth Day, she said that COVID-19 and the stagnation of the global economy caused by it “fulfilled her dream” - they reduced CO2 emissions into the atmosphere. How many hundreds of thousands of people died at the same time, they don’t give a damn about the small ecological chatterbox, which perfectly shows the whole degree of “humanism” of both herself and her followers. Indeed, according to research, during April of this 2020, daily greenhouse gas emissions decreased by an average of 17% on a planetary scale. But the price ?! "Elf" it is to an energy-saving light bulb. However, if only they had one. Much more dangerous than the next revelations of a girl driven by ecology on ecology are the words spoken by one of the European and world leaders - Emmanuel Macron. If you carefully examine the meaning of some of the ideas expressed by him in an interview published at the end of April in the reputable Financial Times, the right word becomes very uncomfortable ...

According to Macron, the COVID-19 pandemic “can give the capitalist system a unique opportunity to become more human ...” What should this humanity be? Of course, in "saving the planet from the devastating effects of global warming." And further - attention - the most important thing: the French president believes that "if people can do completely unthinkable things with their own economies to contain the spread of the pandemic," then, therefore, "they are quite capable of making the same sacrifices in order to make climate change on Earth is less catastrophic! ” Great logic! Amazing! “The end justifies the means” - somewhere we have heard this before, from the Jesuits, it seems. According to Macron, since the world, frightened to the point of clouding the mind with all-pervading ailment, meekly allowed itself to be driven into almost total quarantine, did not explode by spontaneous hunger riots and uprisings generated by the "self-isolation" of the unemployed, the conclusion follows from this. When escorting to a “new reality” based on environmental nonsense, no one will kick too much. And if so, then you give forced "gardening": France, Europe, the whole world! This is already extremely serious. Judging by the rhetoric and plans of the same Ursula von der Leyen, the EU leadership seriously feared the massive opposition to the forced "greening" of its member countries. However, the pandemic showed that people should be intimidated, and you can do almost anything with them. No one is even rocking. It is very likely that precisely such conclusions were made, and not only in France.

So, the Hamburg authorities announced a strict ban (since the end of 2021) on any heating systems using oil-based fuel. The solution concerns not only central and municipal heating networks, but even individual boilers. The next step is the transition to the "renewable energy" of urban and individual transport, as well as urban farms. Within 10 years, Hamburg intends to completely get rid of any "unclean" energy and transport of technologiesreplacing them exclusively with “green”. This is just one example. However, it testifies that the Old World, despite the losses incurred by the pandemic, nevertheless, with a firm hand, is turning towards "ecological restructuring". It'll be hard? Will new losses follow? Nothing will be tolerated! In this situation, there is another, extremely important aspect - to endure “hardships and hardships”, “tighten your belts” and do other unpleasant things for yourself, in the name of putting the ideas of Grethism-Tunbergism into practice, it will not be necessary for those who really rule this world. According to the analysis conducted by various groups of analysts - from the Forbes magazine to the Institute for Political Studies, for the richest people in the world, the coronavirus pandemic turned out to be truly a “golden time”! Only for the period from March 18 to April 10, 2020 their fortune grew by 238 billion dollars. The capital of the first moneybags of the United States for 2 "quarantine" months increased by 15%. Or, in absolute numbers, at 434 billion US dollars, reaching 3.38 trillion dollars. These leeches will gladly participate in the new ruin of mankind, "in the name of high environmental principles." At the same time, they will become even richer!

For Russia, such a prospect is not just unpleasant, but deadly. If the embodiment of “green” ideas, at least only in Europe, is in full swing, the “oil war” and the current drop in energy prices will seem like a sweet tale to us. As well as the same problems with the Nord Stream-2. All the "flows" going to the West will simply become useless to anyone, as well as oil pipelines. For the remaining markets, primarily in Asia, the war will go with fierce bitterness, they will simply try to destroy competitors. It is clear that the world does not end with the Old World alone, but anyone can find and evaluate the figures for Russian energy exports in this direction. The prospect of its loss, believe me, smacks of extremely unpleasant consequences for our economy.

Of course, even with the greatest zeal of the European “greens” and the maximum support of their leaders for the Macron level, carbon neutrality will not be realized tomorrow. The European Green Deal refers to the year 2050 as a specific deadline. Nevertheless, it is necessary to take into account the possible risks of Russia today. Problems do not turn into a catastrophe only if they are noticed on time, correctly evaluated and adequately responded to.
Ctrl Enter
Noticed oshЫbku Highlight text and press. Ctrl + Enter
We are
What has changed the coronavirus in the world or the non-medical results of the pandemic
Peace enforcement operation. Russia inflicts a preemptive strike on Kiev
Reporterin Yandex News
Read Reporterin Google News
8 comments
Information
Dear reader, to leave comments on the publication, you must sign in.