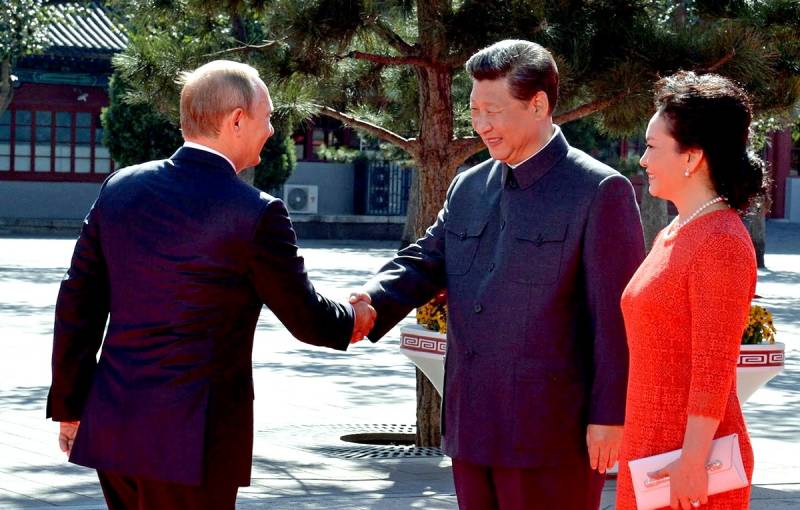 The recent speech of the Minister of Foreign Affairs of China, a member of the State Council of the country, Wang Yi, during which not only words of support and solidarity were addressed to our country, but actually a call for joint action to confront the "collective West", is more than significant.


It must be admitted that until recently, Beijing, although showing, as a rule, solidarity with Moscow on the main points of the "geopolitical agenda", rather policies a certain distance from our country. Something reminiscent of “fruitful cooperation” occurred exclusively in those cases when great benefits were seen for the Celestial Empire. Has the situation really changed? Let’s try to figure out what Beijing’s “friendly impulse” really means to Moscow.

The results of World War II or preparations for the Third

?
One of the key points of the statement made by Comrade Wang Yi at a press conference held during the 3rd session of the All-China Assembly of People's Representatives of the 13th convocation is Beijing’s voiced readiness “to defend and defend the results of World War II in the most decisive manner with Russia ”, To seek strict observance of the UN Charter, as well as“ to counteract any form of unilateralism ”. It would seem - what is the matter of the Celestial Empire to the attempts undertaken by the West today to “rewrite” history, not only to revise the main role of the USSR in the defeat of Nazi Germany and its allies, but almost to completely delete our country from the number of victorious countries, equating the aggressors and guilty of war? It’s even a matter ...

In Beijing, unlike the countries of Eastern Europe, freed at the cost of the colossal victims of Soviet soldiers, and then who were our "allies" in the Warsaw Treaty Organization, they remember very well who defeated the Kwantung Army of Japan, which occupied China and destroyed millions of its civilians. They are well aware that without the help of the USSR (including the military, which actually lasted from 1937 to 1949), the country would not have gained independence and certainly would not have become one of the winners in World War II, would not have taken an honorable place in the permanent composition of the Council UN Security. By the way, not everyone knows that until 1971 the Celestial Empire in this organization was not represented by the PRC, but the so-called “Republic of China” - the Kuomintang fragment, known today under the name Taiwan. The very one that Comrade Wang Yi in his speech called the original Chinese territory, the desire for reunification with which "not a single force can be curbed."

These warnings are addressed to a very specific state - the United States. Wang Yi warns them against “crossing a dangerous line”, although everyone can see today - in Washington, “having bit a bit,” they are determined to cross all possible lines, borders and the notorious “red lines” in their eagerness to “put in place” Beijing. The head of Chinese diplomacy says bluntly: "a state that does not see the difference between truth and falsehood cannot take its rightful place in the world." The claims “for a pandemic” put up by mad Americans against his country today, he calls “a provocation”, the organizers of which “remain on the beans” and “shame on their own head”. There is no doubt - this fully applies to similar requirements, sounding from the White House and the US State Department. Neither does China intend to pay “for the distribution of COVID-19”, much less pay for it, in the least.

Not so long ago, practically all the world media outflanked the “secret report of Chinese intelligence”, allegedly addressed to the party and government leaders, whose authors strongly advise the country's leaders to prepare for an armed confrontation. First of all, with the USA and their allies. It is hard to say how genuine the document is. However, which is very characteristic, the Celestial Foreign Ministry did not confirm the reliability of this information in response to numerous appeals and requests, but did not reject it, as is usually the case in such cases. From which we can draw an almost unambiguous conclusion - in this case we have a well-thought-out and authorized “throw-in”, which in essence is the notorious “last Chinese warning” to the United States, in a literal sense. Beijing is not eager to fight at all. However, he will not stop at the use of force to protect his interests in case of emergency.

An “indestructible fortress” against the USA?

We must pay tribute to the Chinese comrades - despite the sweeping and insulting accusations against them from almost the first days of the pandemic from Washington, they tried to the last to return relations between the two countries to a peaceful and calm track. No wonder Wang Yi expresses the hope that the path of "constructive coexistence between the US and China will be found," despite the differences and contradictions that divide them. Not so long ago, Beijing demonstrated with all its strength its readiness to observe the contours of the “trade agreement” reached at the end of 2019 with the Americans, moreover, to expand them. In the Middle Kingdom they talked about their readiness to lift sanctions and increase purchases of American goods ... What is the United States doing in response?

On May 20, the US Office of Foreign Assets Control (OFAC) announced the imposition of sanctions against Chinese companies “for cooperation with Iran,” on May 23, the Commerce Department there published another sanctions list of 33 Chinese companies, which are subject to restrictions in connection with the “oppression of Uighurs” and “collaboration with the PLA.” Just yesterday, the White House published a document stating its intention to “revise the state strategy with respect to Beijing,” of course, to sharply tighten it in connection with the “malicious actions and policies of the Communist Party of China.” Secretary of State Mike Pompeo is again pouring out statements about Hong Kong, where the Chinese authorities have firmly decided to put things in order and broadcasts about "the loss of their autonomy." Donald Trump and at all over and over again speaks of a firm intention to “sever all relations” with the Celestial Empire. The thing really smells of war, gentlemen! It is highly unlikely that two world powers emerged from the confrontation, which reached such a level of intensity, with the smiles of leaders, under the click of camera flashes and the rustle of feathers, which sign the next “world”.

In this situation, China really needs allies, and of a very specific kind. Not without reason, in his speech, Wang Yi speaks of the "unyielding Russian people" who "having defeated the coronavirus epidemic under the wise leadership of President Putin, will come out of it even stronger"! How he spoke! And he praises our leader at the level of his own Chairman ... Oh, this is for good reason. With such praises, it is precisely what potential military associates are extolled. Well, guess what, if Comrade Wang Yi absolutely bluntly and bluntly declares: “Having rallied shoulder to shoulder, China and Russia will be able to fully guarantee peace and stability on the planet, reliably defending international justice!” Russia is being explicitly called for a "new level of strategic interaction" that will allow the two countries to "unite in an indestructible fortress" in the face of the "political virus" emanating from the United States today. And you should not consider this as just loud declarations decorated with the beauties inherent in eastern diplomacy. Let's not forget - we are talking about the People’s Republic of China with all its inherent specifics. The foreign ministers there, unlike Ukrainian or Baltic half-witted “figures” of the same rank, do not fuss about what’s going on. They bring to the attention of the world public a carefully calibrated and clearly coordinated with the highest leadership foreign policy "line", which the country is determined to adhere to.

What is the prospect for Russia?

We will not rush into conclusions and forecasts that are obviously premature at the moment. It is better to consider some facts that are most directly related to our topic. Ten days ago, global traders came to the conclusion that oil consumption in China returned almost to the “pre-coronavirus” level, amounting to 13 million barrels per day. Moreover, according to the estimates of the China National Petroleum Corporation (CNPC) analytical center, the import of “black gold” in the country this year will not fall, but will increase, albeit only by 2%. Also, natural gas consumption will increase by 3% (up to 313 and a half billion cubic meters). So what? Give it all to Saudi Arabia, Qatar, or the same Americans ?! The United States, by the way, has set its sights on the Celestial energy market more than specifically - not without reason the local Exxon Mobil is ready to swell $ 10 billion to build a petrochemical complex in Huizhou. It seems that they have already begun construction ... Yes, from the dead donkey they got ears, not the huge Chinese market - with its volume and prospects! We need it all ourselves before the cut! If the comrades there intend to build an “indestructible fortress” with us, and not with the Americans, there is reason to hope that this will find its concrete reflection in the field of energy cooperation. At least in the form that it will become more mutually beneficial and less one-sided. However, this can be said particular. Not so long ago, OPEC officials voiced newswhich can be considered sensational: negotiations were held between the Secretary-General of this organization Mohammed Barkindo and the head of the National Energy Department of China, Jan Jihua, during which Beijing directly announced its intention to restore order in the world oil markets!

No, of course, Comrade Janghua spoke with Barkindo about the prospects for cooperation with OPEC "to stabilize the global oil industry and ensure global energy security." However, even the well-known prickly animal understands what this really means. Beijing is tired of the “war” and crises in the market critical for it, as well as the desire of some especially hot guys to arrange “big redistributions”. China needs stability and predictability in energy supplies. And, you can be sure that he will achieve his goal. The only question is whether Russia will be seen as an ally, whose interests must be taken into account or not. What is more profitable for us? “We are witnessing the end of the American system and the onset of the Asian Age, in which China will play an increasingly important role” - these words belong in no way to Comrade Wang Yi, but to the representative of the European Union for Foreign Affairs and Security Policy, Josep Borrel. Having made this recognition publicly and openly, a high-ranking European bureaucrat, in fact, only stated a completely obvious fact with which the “collective West” can no longer do anything with all its will. However, for him there truly is a terrible dream: the union of Moscow and Beijing. Over the last time, many famous American media, such as The Hill, The Diplomat, Foreign Policy and others, have relished this topic with all their heart and soul, broadcasting in full swing nightmare forebodings that “relations between China and Moscow will deepen significantly” against the backdrop of a pandemic and this will have “global implications for the whole world” in which they “want to establish a new international order by eliminating US dominance”. Well ... To be on this!
Reporterin Yandex News
Reporterin Yandex Zen
22 comments
Information
Dear reader, to leave comments on the publication, you must sign in.