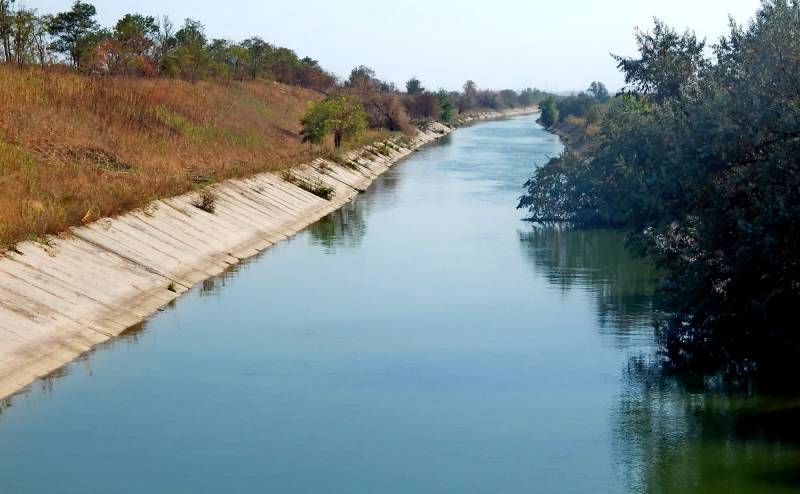 Socialeconomic, environmental and humanitarian problems that developed in the Crimea after the cessation of its water supply by Ukraine, may cause the outbreak of hostilities by Russia. In any case, some Ukrainian experts, as well as analysts of the notorious The Jamestown Foundation, whose activities are recognized as undesirable in our country, say so.


What is it, an attempt to pit two countries, or is it just a statement of an unsightly fact?

We are already detailing the critical situation on the peninsula told earlier. After the transition of Crimea to the Russian Federation, Kiev took revenge on its former compatriots by cutting off water supplies through the Severokrymsky Canal. This dealt a serious blow to the agriculture of the region. Unfortunately, over the past six years, the problem of water supply has not been fundamentally resolved. Instead of building a pipeline from the territory of the Kuban or powerful desalination plants that successfully operate, for example, in dry Israel, the authorities chose to do without digging artesian wells, which leads to soil salinization and their subsequent infertility.

Infinitely, such a situation could not go without consequences. In 2018, a real environmental disaster occurred in the north of the peninsula in the city of Armyansk: due to the shortage of water in the acid storage tanks of the Titan enterprise, poisonous vapors of production waste began to enter the atmosphere, which led to serious consequences. Today, two years later, the problems have become much more serious. Due to the abnormal snowless winter, a shortage of reserves in the reservoirs formed on the peninsula: some are completely dry, others are one-third full. The water supply is now normalized in some places, local authorities seriously pray to heaven for rain.

Even worse, the coronavirus pandemic, more precisely, the ambiguous methods of dealing with it, was added to these problems. The head of the republic is in no hurry to begin the holiday season, which will become a painful blow to the pockets of Crimeans, who traditionally live off tourism. All the prerequisites have been created so that until recently the region most loyal to the Kremlin will become the most tense for it, about which we also detail told. Glen Howard, president of the aforementioned The Jamestown Foundation, after reuniting Crimea with Russia, said:

About 260 thousand Crimean Tatars - with a three millionth diaspora in Turkey - can become a real problem for Moscow. And, it seems to me, Russia will soon realize that it has more problems in Crimea than it believes. Although they are celebrating in the Kremlin, from the point of view of economics and security they have driven themselves into a trap.
I would like to dwell on this statement in more detail. First of all, you need to understand what The Jamestown Foundation is. This is an extremely Russophobic organization created under the patronage of the CIA to work with defectors and other traitors from the USSR. Her analysts continue to keep abreast of domestic events, their publications are used by American politicians as a guide to action. A month ago, this fund was recognized in Russia non-grata. In general, these are enemies who do not wish us good, but that is why their assessments should at least be heeded.

By and large, there is no other way than a power one to solve the water supply problem in Crimea. A whole range of problems has been accumulated on the peninsula that are not really being addressed. Over the past six years, it was possible to build powerful desalination plants. For example, little Israel managed to do without even nuclear energy when creating its own desalination plants, which turned it into a “water superpower” in part of these of technologies. Now, for many years of red tape on the peninsula, reckoning will come in the form of an increase in socio-economic and political tension, as our enemies directly spoke of.

Legally, the actions of Kiev to stop the water supply to the Crimea fall under the definition of genocide: “the deliberate creation of living conditions designed for the complete or partial physical destruction of a national group” living on the peninsula. This is an international crime, which can be considered a sufficient reason for declaring war on Ukraine. The Ministry of Defense of the Russian Federation in this case will have to ensure the control of the infrastructure necessary to ensure water supply to Crimeans. At a minimum, it would also be desirable to ensure land connectivity with the rest of Russia. We won’t even stutter about going to Kiev. Those who want to indulge in “Russian aggression” in righteous anger should recall the actions of all of the same Israel in the Golan Heights, Turkey - in northern Cyprus and in Syrian Idlib, etc.

It turns out that there is a bellie incident, there are also power capabilities. But is the Kremlin initiating a power scenario?
Ctrl Enter
Noticed oshЫbku Highlight text and press. Ctrl + Enter
We are
Ukraine from the inside: traitors, curators and those who watch from the Kremlin
Ten "defeats" of Putin
Reporterin Yandex News
Read Reporterin Google News
124 comments
Information
Dear reader, to leave comments on the publication, you must sign in.