Mastering the Moon: Russia has been assigned the “role of a servant” in the USA 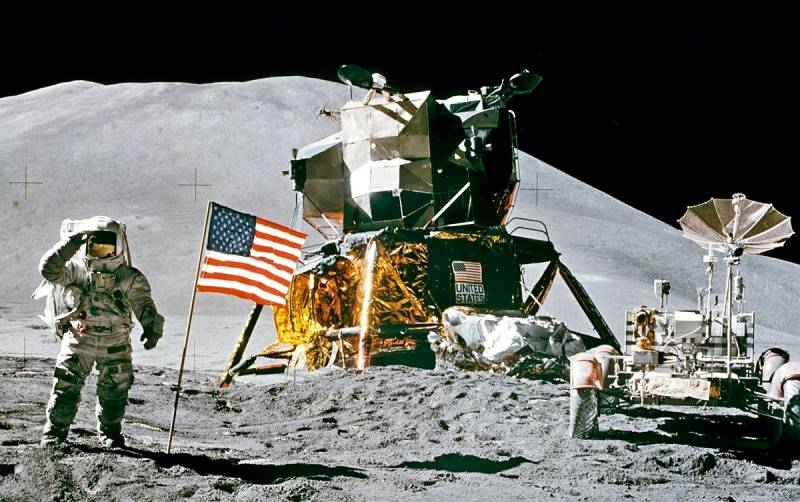 American business acumen inevitably arouses respect. Step by step, the United States is increasingly becoming a "hegemon" not only on Earth, but also on the Moon. Some time ago, President Donald Trump in absentia “privatized” minerals on our natural satellite.


Now, bypassing the UN, NASA is pushing through the so-called “Artemis Accords”, according to which all managerial threads in outer space will be tied to the “Washington Switch”. With all this, for Russia in the "new marvelous world" a place, if any, is somewhere in the wings of the United States.

The topic of moon exploration is extremely controversial. First of all, what resources can we talk about? There are iron, aluminum and titanium on the Earth’s satellite, but their commercial development and delivery to Earth with current technologies is not practical. Also there is water necessary for the exploration of the moon and flights to Mars and deep space. There is a helium-3 element in the lunar surface, which can serve as fuel for promising thermonuclear reactors. The problem is that in reality such of technologies Today, no, these are all projects of the future.

If we talk about the development of our only satellite as a business, then it, on the whole, gives the impression of a “moon bubble”. It is noteworthy that the role of private space companies has grown sharply, which, with active PR from the White House and NASA, will be able to enter the stock market by selling their shares to naive dreamers. With a high degree of probability, this will all end as another “dot-com collapse”, unless some major technological breakthrough occurs.

Nevertheless, the United States took the moon seriously: either they "clear the clearing" for themselves for the future, or the Pentagon is in the military interests, or all together. Legally, this topic is regulated by the Moon Treaty of 1967 and the Moon Agreement of 1979. By the way, neither Russia nor the United States joined the latter. The key provision of the Moon Treaty was that it was recognized as the common property of all mankind. But in 2015, the US Congress gave American companies the right to explore, mine and sell resources outside the Earth. A month ago, President Trump continued this line, allowing US companies to develop resources on the Earth’s satellite:

Outer space is, from a legal and physical point of view, a unique space for human activities, and the United States does not consider it as a public domain.
So, in a clear order, the “hegemon” de facto extended its jurisdiction to another planet. Now, bypassing the UN, NASA is promoting the so-called "Artemis Accords", which will bring many interesting innovations. For example, “security territories” may be introduced on the Moon, when approaching which, representatives of other countries will have to notify and coordinate so that “it is safe for everyone”. Space powers are also ordered to "disclose intelligence plans and provide scientific evidence." To whom to provide, it is known: naturally, NASA. Reuters, citing its sources in Washington, explained why this cannot be done on the basis of some other form of international cooperation:

The agreements of Artemis ”were drawn up in order to avoid the whole process through the UN, as otherwise the process will be too long, and work with countries without a space program will be unproductive.
Thus, the "hegemon" begins to establish its rules in near-Earth space. The most interesting thing is that, it turns out, for this dubious pleasure of joining the "Agreements of Artemis" as a "servant", our country will still have to fight. NASA spokesman Michael Gold explained that the United States will not leave us overboard if we participate in the program for building the Gateway near-moon station. Recall that earlier Roskosmos expressed dissatisfaction due to the fact that in this project, he speaks frankly on the sidelines.

Apparently, much has now changed, if the Russian state corporation, instead of sending the United States to hell with its “agreements,” has expressed a desire to explore the moon together with NASA.
Ctrl Enter
Noticed oshЫbku Highlight text and press. Ctrl + Enter
We are
Putin's phenomenon is Russia's main problem
Ten "defeats" of Putin
Reporterin Yandex News
Read Reporterin Google News
45 comments
Information
Dear reader, to leave comments on the publication, you must sign in.