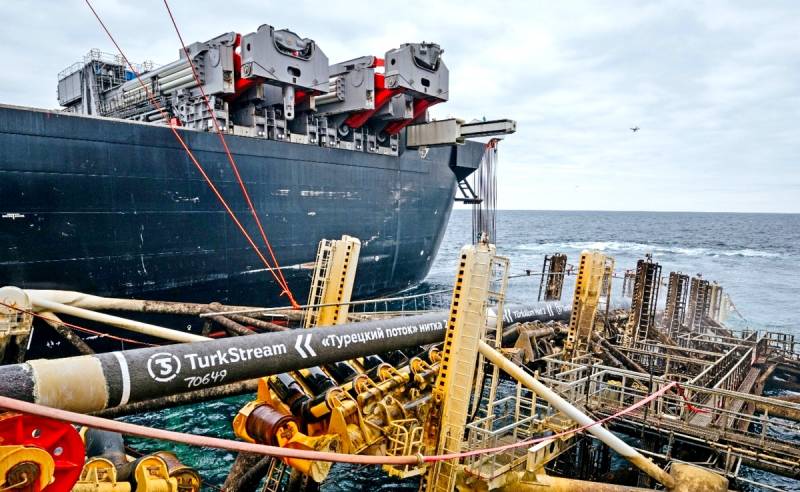 If mankind has proved its complete incapacity for anything, then, first of all, it is to draw conclusions from the cataclysms and global shocks experienced by it. If it were different, the world would not be covered with depressing constancy by universal financialeconomic crises. And world wars in history would not have a numbering ...


The energy exporting countries have not yet managed to really calculate the enormous losses incurred as a result of the recently raging "oil war", as the prospect of a new, no less large-scale and brutal confrontation has already loomed on the horizon. But this time, the subject of controversy and attempts to redistribute may be the sales markets of not “black gold”, but “blue fuel” - a resource representing for the domestic economy no less (if not more) significance than oil.

Let’s try to figure out what exactly can happen and what prospects Russia has in this conflict.

On both sides of the ocean

The main sides of a potential collision are about the same as in the case of oil: Russia, the United States and the Middle East. Unless in the latter case, instead of Saudi Arabia, we have to deal with Qatar. It is from these “hot guys” that the main threat emanates today. However, we will not run ahead of ourselves, but let’s talk about the developments with which each of the “players” that have their own colossal interests in the gas market has approached the beginning of the current crisis. Let's start with our country. The affairs of RAO Gazprom, as you know, leave much to be desired. The first quarter of this year, the "national treasure" ended with a loss of 306.2 billion rubles (about 4.14 billion dollars) according to RAS. For comparison, the same period in 2019 brought Gazprom 199.4 billion rubles ($ 2.7 billion) in net profit. The reason is simple - according to available information, during this time, the supply of “blue fuel” to Europe (including Turkey) fell by 19,2% in annual terms and amounted to only 39.62 billion cubic meters. The country's main energy project, the Nord Stream-2 gas pipeline, turned out to be in limbo, however, with the construction of the Turkish Stream, everything is also far from being as smooth as we would like. Having received through the efforts of the West a bonded contract for fuel transit, Kiev continues to become impudent and threatens Gazprom with new lawsuits, and acting in close “conjunction” with the “unplaced” Poles are not appeasing. The situation is difficult. However, it is incorrect to say, as some “experts” do (by strange chance, the vast majority of them are citizens of Ukraine) that Gazprom is “on the verge of bankruptcy”. 20% - not 100% or even 50%. At a reasonable policy - the matter is fixable.

The United States, without hiding it at all, set itself the goal of completely “reformatting” the energy market, at least Europe, for itself. Naturally - due to the ousting of Russia from it. What about the implementation of the plan? Too bad, to be honest ... American LNG in the Old World recently does not want to see, and categorically. According to the available information, British Petroleum, Enel, Shell, Total, Uniper - almost all the leading companies in the sector, intend to refuse the volumes of its supplies already contracted for June. The Spanish Endesa and Repsol SA, who did not accept as much, as 200 million cubic meters of liquefied gas from the United States, "went into failure" before everyone else. At the moment, officially announced the cancellation of 22 ordered batches, which were supposed to arrive in Europe from the Cheniere terminal and the Freeport factory. There is nothing to be surprised at - gas in the USA by itself is cheap (below $ 70 per thousand cubic meters). But the liquefaction price of this thousand “lapses” for a hundred dollars, plus the cost of shipping across the ocean ... In the end, it turns out to be a classic “overseas heifer” at half price, but with a ruble price of transportation. With a final cost in Europe of more than $ 200 per thousand cubic meters, American gas is completely uncompetitive in the local markets, where it can now be freely purchased at $ 80 per thousand cubic meters, if not even cheaper. And this whole "bunch" of problems is not limited to - do not forget that at least 15% of the "blue fuel" produced in the USA is a by-product obtained from the production of the same shale oil. At the same time, the number of operating drilling rigs in the country is rapidly declining for the ninth consecutive week and by now has fallen to a historic low since the 40s of the last century. Last week alone, 35 oil and gas producers “shut up the fountain”. Only 258 towers remained in service. In May last year, there were 802 ... Analysts predict that this decline will continue further.

The Saudi way - to the collapse of the market?

Qatar, which is a recognized world leader in LNG supplies, it would seem, in this situation, should feel as confident as possible, no matter what. However, everything is far from as simple as it seems at first glance. Yes, in 2019, this kingdom exported more than 23.5 million tons of liquefied “blue fuel” to Europe, far ahead of its two main rivals - Russia (15.07 million tons) and the United States (12.72 million tons). Yes, the cost of producing Qatari gas is fabulously low ... However, it can be sold today only in a liquefied form and delivered by gas tankers. And this automatically increases its final cost by all those “markups” that were discussed above regarding American LNG. Moreover, the freight prices of such vessels are steadily increasing. Not in such proportions, of course, as is the case with the oil "bulk", but still ... As a result, the Qatari gas is almost inevitably at risk of losing to any "blue fuel" supplied through pipelines. And this will mean extremely sad consequences for the kingdom. The decision to withdraw from OPEC made by this country at the beginning of last year was just dictated by the desire to fully concentrate the efforts of its own energy industry precisely in the gas "direction". The volume of exports from the current 77 million tons per year by 2024 was to increase to 110 million, and another three years later - to 126 million tons. In fact, Qatar in the energy “roulette” did not put everything on the “black”, but on the “blue”, and now it cannot afford to lose. Further development of the Northern gas field, located in the area of ​​the city of Ras Laffan, the construction, equipment and launch of more and more gas liquefaction capacities is a huge investment! And what if LNG, even at the very lowest price acceptable to Qatari producers, is not needed by anyone?

There is a huge danger that, faced with the danger of “being out of work”, Qatar could “go all out”, throwing out exactly the same fortress that Saudi Arabia broke in April. He is there - he will start desperately dumping, trying to survive from the markets of everyone else. What such crazy actions lead to, the whole world already had the “happiness” to see on the example of the recent “oil war”, which ended with the departure of prices for “black gold” to negative values. Could something like this happen with gas? Alas, yes. As far as it is known, the underground gas storages (UGS) of the European Union can be filled to capacity by September of this year. A warm winter, plus the coronavirus pandemic, which reduced the demand for blue “fuel” in Europe by 17% - these are the reasons for this situation. In absolute terms, in the Old World for April 2020 gas was burned by 5 billion cubic meters less than a year ago. Currently, the UGS of the main European consumers is already 65% ​​filled on average (in Germany, for example, all 81%). It should be borne in mind that the bulk of the “blue fuel” is supplied there under long-term contracts that are binding. It is the Americans in Europe who are ready to pay $ 36 for liquefaction and abandon the already contracted LNG in order to avoid the cost of its transportation - such things do not work with Gazprom. In his contracts, fines are written so that you do not get sick ... The only market in which Qatar can try to “give a fight”, albeit with the smallest chance of success, is the Asian region. With the onset of the coronavirus pandemic, the Qatari tankers going there began to turn in the direction of North-Western Europe, but now deliveries have been forced to slow down - even through the terminal in Zeebrugge, all import capacities of which were reserved by the state company Qatar Petroleum until 2044.

However, the reverse reorientation to Asian markets will also take some time. Yes, and whether the “sheepskin is worth the price”? According to experts of the International Gas Association, the excess supply of "blue fuel" over demand for it may well remain even until the middle of this decade. And then dumping - do not dumping ... Everything is one. If in Qatar they still decide to “fight,” then they will lose anyway. The Oil War extremely convincingly showed that the collapse in energy prices hurt all market participants and there will simply be no winners in this battle. Although ... Qatar cannot compete with Russian pipeline gas supplies by definition, therefore, it will try to “clear the clearing” exclusively on the LNG market. Yes, our country there also has its own interests, and considerable. However, if someone’s export ambitions in the field of “blue fuel” are at risk in this case, they will be completely buried, then it is the Americans who are the permanent patrons of the Middle Eastern monarchies. The local energy industry is already “breathing in the dark” (in any case, according to the figures given at the beginning of the article), and further depreciation of gas will kill it completely. The third phase of the Freeport LNG plant, which is the seventh largest in the world and the second in the United States, was solemnly launched this month in Texas. It risks becoming a monument to American vanity and unfulfilled hopes. Expensive, I must say, will turn out a monument - in the construction of the enterprise, according to the head of the company Michael Smith, at least 13 and a half billion dollars have been swollen. By the way, he also dreams of the fourth stage ... If the sheikhs of the East nevertheless bring gas prices down after oil prices, all these investments can turn into net losses.

Does all of the above mean that Russia may not be afraid of anything? For example, to breathe freely, hoping that Washington’s endless nitpicking to the same Nord Stream-2, resulting in new threats and sanctions, will now stop due to their complete senselessness? Not at all! I dare to assume that everything will be exactly the opposite. The United States, completely unaccustomed to doing business honestly, will continue to break through its “gas window to Europe”, using all the same crappy “tools”. However, this is a topic for a completely different conversation.
Ctrl Enter
Noticed oshЫbku Highlight text and press. Ctrl + Enter
We are
Peace enforcement operation. Russia inflicts a preemptive strike on Kiev
Oil prices: how Russia outwitted the whole world
Reporterin Yandex News
Read Reporterin Google News
7 comments
Information
Dear reader, to leave comments on the publication, you must sign in.