Why the West quashed Russia's exit from quarantine 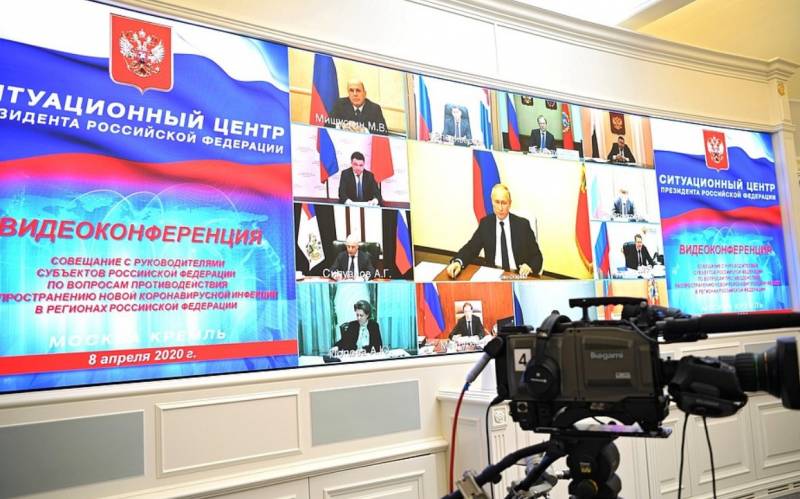 Statement by Russian President Vladimir Putin on the termination of “a single period of non-working days for all” and “the restoration of the work of all industries economics»Our country caused a flurry of emotions in the West. No, no one, of course, did not expect that they would rejoice for us and wish good luck ...


However, the level of utterly bile and vicious negativity that has spilled over on this occasion to the pages of the vast majority of the media of “civilized countries”, in truth, causes a slight upheaval. What makes such a frenzy of those who constantly impose themselves on Russia as advisers, teachers, "partners", "friends" and why?

"They all lie, they have everything bad!"

Something like this, with quite distinct hysterical notes, is made by the statements of those Western journalists and “representatives of the expert community” who aim to convince the audience that, thanks to the decision of the president, our country is “committing collective suicide”. Well, how so ?! The Russian mortality from COVID-19 cannot be so unrealistic, fantastically low! The number of those who died in our country from a disease with tens of thousands mowing the inhabitants of “developed countries”, which is just over two thousand people, is simply insulting for states that for decades boasted their alleged superiority over us in their “standard of living,” including medicine. Okay, not so many Chinese have died (although they also lie, of course!), But they are smart, they make smartphones. But these “mire barbarians certainly cannot save their fellow citizens so much more efficiently than us,“ civilized ”and“ developed ”ones! On this occasion, one of the leading “mouthpieces” of the West, the Financial Times, has created a whole “theory”. According to its authors, "Russia underestimates the real mortality from coronavirus by 70%." Where are such conclusions from?

Yes, simply "sleight of hand" and small arithmetic "tricks" for the smallest. Sorry, for the most gullible. We take the “general data on mortality in Moscow and St. Petersburg” for the month of April of this year, gleaned from unknown sources, find supposedly “1444 deaths above the normal mortality rate”, automatically add them to the figures of “official statistics”, and voila - before us is "an increase of 72% in the number of victims of COVID-19 in Russia"! On what basis are these very “excess” deaths attributed to the coronavirus? How can you try to "sculpt" conclusions across the country on the data of only two cities, albeit one of the most densely populated in Russia? And these are just the most obvious of the questions.

The bottom of unprofessionalism. Top shamelessness. This is not even an attempt to “fit the task into an answer”, but a completely egregious quackery, in which the “answer” is taken, as they say, “from the ceiling” and quite naturally does not withstand any analysis and criticism. Yes, in comparison with April last year, mortality in our capital increased by 18%. Even by 20% - if compared with the same time period of the previous decade. However, why not recognize the obvious and the well-known instead of the figurative juggling with numbers - the number of people dying from life increases during any serious crisis. General psychological depression, a state of constant stress, fear, excitement, anxiety - all this provokes the growth of heart attacks, strokes (which are one of the most deadly diagnoses in our country), exacerbation of other chronic diseases that can lead to the grave.

Add to this the increased load on the medical system and, by the way, another extremely important factor - the categorical (and quite understandable during the pandemic) reluctance of many citizens and close approach to any medical institutions, sharply increasing the number of those who are trying to "endure" or be saved self-medication ... These are real causes of increased mortality, not fictitious, but who are they interested in in the West? They don’t fit into the “concept” - down with them! At the same time, FT journalists are modestly silent about how mortality in New York increased in the same April. Six times if you want to know! And so - in almost every of the leading European capitals. Somewhere more, somewhere less, but still, at times, not percent. It is not surprising that the above-mentioned publication (as well as the same libel published by the New York Times), Russian Foreign Ministry spokeswoman Maria Zakharova called “a real salvo of fakes”, and representatives of the State Duma have already promised the publication of trouble, considering its publication “an ordered lie on a global scale” .

“Coronavirus will take over Russia and overthrow Putin!”

However, the actions of the Kremlin, which testify to the fact that our country is emerging from a pandemic without catastrophic losses, both human and economic, are much more rampant in the West as the collapse of the hopes and hopes cherished there that COVID-19 will become our downfall statehood. Well, at least - it will lead to the removal from power of such a hated and frightening leader, with the departure of which the “friends” of our Fatherland, both inside him and outside the country, are linked with plans to destroy him. What did Western propellers and “analysts” not “prophesy” from the moment the incidence curve in our country went up and a national quarantine was declared: “Coronavirus will cover Russia and bring down Putin's rating!” - This is The Guardian. “Pandemic shakes the chair under Putin” - this is Radio Liberty. "Putin expects a riot of the Russian public" - Washington Examiner. And when oil prices also fell down, the whole audience was completely perked up and almost rushed to put champagne on the ice in anticipation of an “inevitably impending victory”. Everyone dispersed here: “Because of the ruin, Russia expects the impossibility of waging wars and the inevitable democratization!” - Anders Aslund, the “best friend” of our country, fluttered on the pages of The Hill, who had not predicted to her recently, except perhaps the fate of Atlantis. “Economic troubles will cut Putin’s wings,” the Financial Times itself arrogantly concluded, promising with real satisfaction that the Russians would have “real suffering” in the very near future. Just think, even such a small thing as the Finnish Etelä-Saimaa, connected to this desperately fake choir, and with all the possible fervor! A certain “Russia specialist Jussi Lassila” on its pages predicted our country no less than “a total crisis, chaos and a change of power” ...

And here is how you order today to explain to your readers, listeners, viewers that all this ridiculous "vanging" turned out to be a complete zilch. No “clipped wings”, no rebellion, no chaos, no crisis (in any case, “total”). Putin has not gone anywhere and is clearly not going to go ... In this, of course, extremely unsightly situation for them, everyone dodges as he can. However, one has to go to completely unimaginable feints and twists, which cannot be called anything but a mockery of logic. For example, most Western media outlets news The President’s decision to weaken quarantine is strongly emphasized that “Russia removes restrictions by moving into third place in the world in terms of the number of infected COVID-19.” Well yes. But how could it be otherwise - with our scale and population of 145 million? All this is comparable except with the same United States, where, in general, there are more than 6 times more cases. And the dead from the coronavirus - almost 40! Someone reproaches the “Russian authorities” for yet another “falsification”, claiming that the statements of their representatives about the exit of our country on the “plateau” of incidence do not correspond to reality. Sorry, but this thesis was expressed, first of all, by just the representative of the World Health Organization in our country - Melita Vujnovich, and not by someone in the Kremlin or the domestic Ministry of Health. However, he forgot - WHO has for some time no faith in Washington ... They, the bastards, it turns out, not only "work for China", as Trump said, but also for the Russians. Well, maybe they can recognize in the West that the “increase in the number of infected people" is primarily due to the increase in the number of tests done for COVID-19. I remind you that their volume is planned to be increased to 300 thousand a day - for comparison, in Ukraine over the entire period of the pandemic, one and a half times fewer people were checked.

Some passages taken to judge and argue about what is happening in Russia today are simply disgusting. For example, the president, who announced the long-awaited end of the period of universal self-isolation, is reproached for striving in such a way ... "to get rid of hungry mouths!" Like, instead of "just distributing money to citizens," this insidious despot and tyrant was about to "let out millions of defenseless people on the streets." Well, they all will die, naturally, of such and such a grandmother, which, in fact, is achieved by the Kremlin ... No, well, why should we hate our country and its leader in order to think of such a thing ?! Against this background, the reproaches to the president sounding at the same time that he is “shifting responsibility to the heads of the regions” are just babble. It’s interesting - what would Putin be reproached for, if he were to personally determine: in which area quarantine can already be removed, and in which it is too early? Surely, in "authoritarianism" and "usurpation of power." Well, they’d come up with something. All this is again from terrible complexes of representatives of those countries where the authorities disgraced themselves in the most natural way, showing their own incompetence and inability to manage in a crisis situation. In Spain, for example, already 3 relatives of coronavirus victims have filed a class action lawsuit against Prime Minister Pedro Sanchez and his government for “wrong and unprofessional actions” during the pandemic. Almost 27 thousand dead with the local population - people can be understood.

The current reaction of the "collective West" to positive events in our country is as eloquent as possible. And absolutely sincere that the most unpleasant. It testifies, first of all, that Russia did not have “friends” or “partners” there, there is not and cannot be in principle. You should not expect from these gentlemen at least any unbiased attitude to our Fatherland and its objective assessment. They do not want anything good for us, hiding behind their own hypocritical "attention" only the desire to hurt more. And this is perhaps the only lesson that Russia should learn from what is happening.
Ctrl Enter
Noticed oshЫbku Highlight text and press. Ctrl + Enter
We are
Ukraine from the inside: traitors, curators and those who watch from the Kremlin
Ten "defeats" of Putin
Reporterin Yandex News
Read Reporterin Google News
38 comments
Information
Dear reader, to leave comments on the publication, you must sign in.