Why Russia should give a second life to atomic "Orlan" 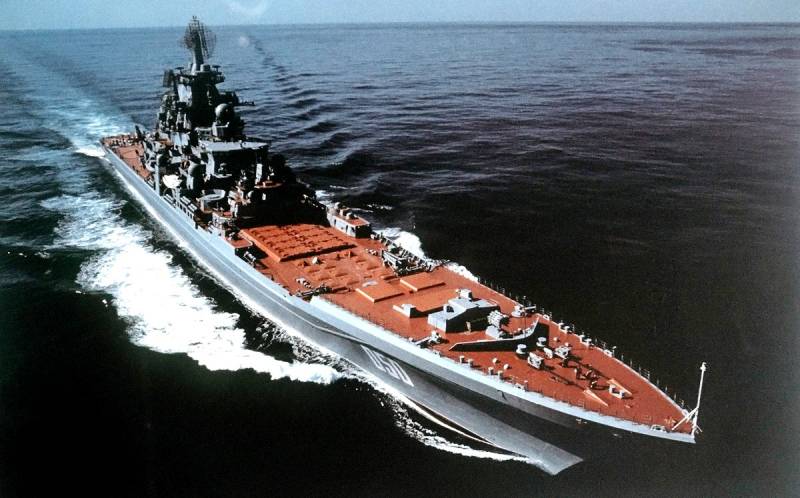 The Russian Navy is going through hard times. Its surface component is frankly weak, and the program for the construction of large ships in the far sea zone has actually been stopped. All this happens against the backdrop of a growing global economic crisis, which tend to end in a big war.


The clouds are gathering, and our Navy needs its trump cards "here and now" in order to somehow change the balance of forces at sea.

Recently it became known that the Leader project destroyer construction program with a nuclear power plant and a modernized, increased displacement version of the Admiral Gorshkov frigate was stopped. It’s expensive and difficult, one “Leader” could manage the treasury in the amount of about 100 billion rubles, and frigates are a serious problem with engines. Recall that the destroyers were supposed to be one of the few carriers of Zircon hypersonic missiles, on which we have made a big bet. Everything, a bit rate.

However, this is not the end. There is a difficult, but quite working option with the modernization of atomic missile cruisers of the Orlan project. What could mean the appearance of such a ship at the head of a naval formation?

At firstThe nuclear cruiser is able to take on the well-deserved role of the flagship and headquarters of the compound, thanks to a modern information management system.

SecondlyIts powerful arsenal will make it possible to launch massive missile strikes against both sea and ground targets.

Thirdly, the presence on board the cruiser of anti-aircraft missiles of super long range will provide protection against the AUG air wing of a potential enemy, its jamming aircraft and AWACS.

That is, one "Orlan" at the head of the formation of Russian ships radically increases its strike potential and defensive stability. Well, it looks very solid as a demonstrator of our fleet. Most importantly, these ships do not need to be built; they are already available.

Four such unique ships that have no analogues in the world inherited from Russia of the USSR. The only one in service is Peter the Great, the flagship of the Northern Fleet. The second, "Admiral Nakhimov," is now in deep modernization. The third, Admiral Ushakov (Kirov), was sentenced to disposal. The latter, "Admiral Lazarev", is disabled and with a dismantled power plant awaits the decision of its fate in the Far East. Information about his future fate is extremely contradictory.

The Pacific Fleet is the weakest, and it will have to act, in which case, where the Navy of the United States, China and other countries of the Asia-Pacific region dominate. With all due respect to the cruiser Varyag, the same Admiral Lazarev at the head of the Pacific Fleet would have looked preferable. The problem is that his future fate is a big question. They want to revive it, then quickly dispose of it.

The arguments in favor of sending the cruiser to scrap sound in current realities are not very convincing: it is expensive, it’s better to build several frigates with these funds. Well, how are things going with the construction of new frigates and missile destroyers, we mentioned above. They are not and are not expected in the foreseeable future. The modernization of one "Orlan" is estimated at 100 billion rubles, one "leader" would cost the budget the same amount. But there are no "Leaders" and there will not be, but "Lazarev" and "Ushakov" are, the hand of the "optimizers" has not reached them yet.

In our realities, it would be advisable to give a second life to the Orlan project at least until our shipbuilding industry begins to stamp large surface ships at the speed of the Chinese comrades. 100 billion rubles for a unique warship capable of operating in the distant sea zone - is it a lot or a little? Probably not such a great price for increasing the combat capabilities of the Russian Navy, especially since the money will go to the domestic defense industry, and not to some treasure.

Another question is where to repair these ships. The production facilities are busy, and to drag in the tugboat "Lazarev", deprived of the power plant, from the Far East to Severodvinsk is a difficult story. However, options have appeared. As you know, the Zvezda shipyard was opened in Primorye, where giant ice-class tankers and icebreakers will be built for the needs of the oil and gas industry. The queue for them is scheduled for years to come, but the demand for energy in the foreseeable future may decline due to the global economic crisis.

If the state had the will to revive the Eagles, the Star could receive an order to modernize the cruisers.

But will this will appear?
Ctrl Enter
Noticed oshЫbku Highlight text and press. Ctrl + Enter
We are
100 billion apiece: the Russian fleet did not pull the destroyer Leader
What will Russia do when the ISS does not
Reporterin Yandex News
Read Reporterin Google News
18 comments
Information
Dear reader, to leave comments on the publication, you must sign in.