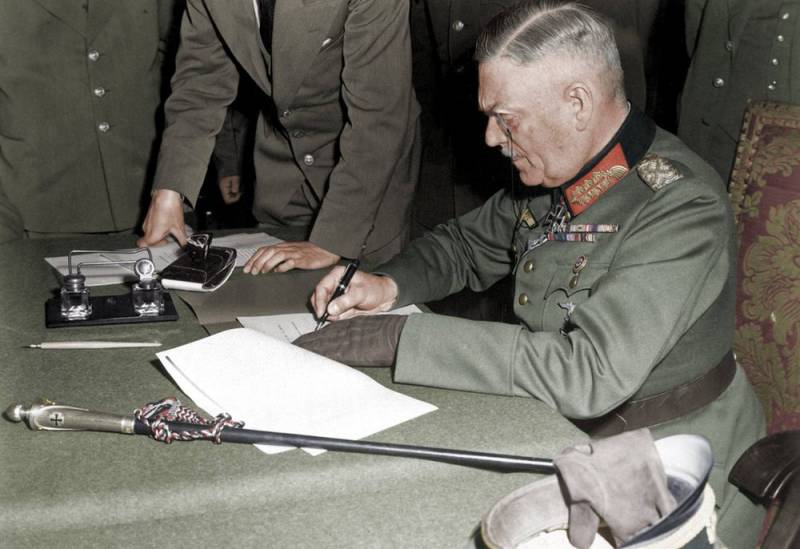 May 6, 2020 Pentagon опубликовал a multimedia presentation dedicated to the Second World War, entitled "Victory Day in Europe: a time of celebration, reflection." This was done on the eve of the 75th anniversary of the victory over Nazi Germany, the date of which the United States and its Western allies traditionally consider May 8.


The table of contents immediately indicated that on this day (VE Day), "Germany unconditionally surrendered to the allies, including the United States." It should be noted that in the United States May 8–9 are not celebratory, although some celebrations dedicated to those events do take place in places. So it is not surprising that the Americans approached the issue in their "exclusivity."

For example, next to the photograph of the “Meeting on the Elbe” bas-relief from the World War II memorial in Washington, where the meeting of Soviet and American soldiers in April 1945 is shown, there is a text that does not apply to the image at all. The Americans not only did not mention the contribution of the Soviet people to the Victory, they generally cynically ignored the USSR. But they wrote about the role of the United States in the liberation of Europe, starting with the landing in Normandy.

The war was raging for almost five years, when on June 6, 1944, US and allied forces landed on the coast of French Normandy. The invasion marked the beginning of the end for Adolf Hitler and Nazi Germany. In less than a year, Germany will surrender and Hitler will be dead. But in a speech to the nation on Victory Day, President Harry S. Truman warned that the Allies should “work to end the war” by defeating the Japanese in the Pacific
- the text says.

After that it is said that initially, on May 7, the surrender of German troops was signed by Colonel General Alfred Jodl in France. However, on May 8, “at the insistence of Joseph Stalin,” a re-signing ceremony was held with the participation of German field marshal Wilhelm Keitel.

It is reported that the surrender of Germany marked the end of the war in Europe, which killed tens of millions of people.

The conflict in 1939 began with Germany and the Soviet Union invading Poland. Among the dead there were about 6 million Jews who were killed by Nazi Germany. About 250 thousand American troops were also killed during the fighting at the European theater of operations
- Direct accusation against the USSR is being caught.

In addition, the presentation mentions that France "took over most of the severity of the fighting." About the USSR they indicated only that "the Soviets celebrate their Victory Day on May 9th."

It is further described that after the victory over Germany, the war with the participation of the USA and allies continued in Asia and the Pacific against Japan.

The regions of Western Europe freed by the allied forces will become prosperous democracies, and the liberated countries in the east will be occupied by the Soviet troops for decades.
- emphasized in the presentation.

At the same time, the presentation text was mainly accompanied by photographs of the US military.
Ctrl Enter
Noticed oshЫbku Highlight text and press. Ctrl + Enter
We are
The United States is unhappy with the joint statement of Trump and Putin on the Second World War
Poland frankly forgot who actually started the Second World War
Reporterin Yandex News
Read Reporterin Google News
22 comments
Information
Dear reader, to leave comments on the publication, you must sign in.