US forces Germany to take the path of war with Russia 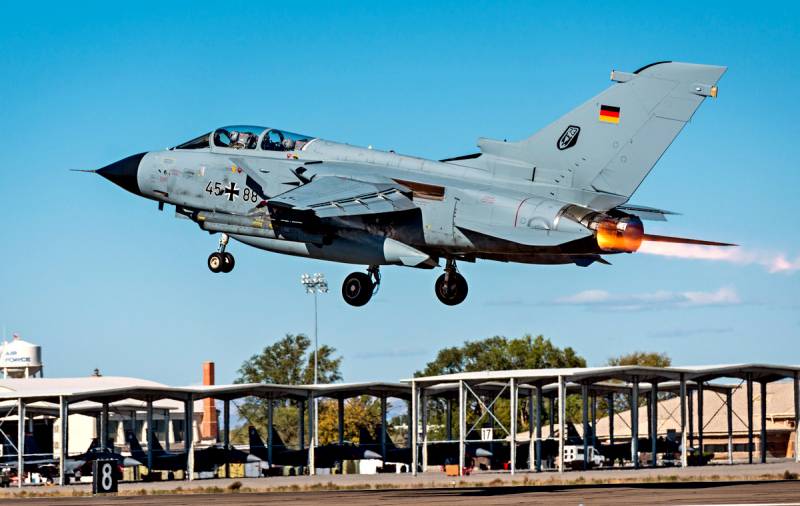 It was a debate in the upper circles of German politics about the advisability of finding American nuclear weapons in this country, it seems to have ended, without even really starting. In any case, if you consider the statement made by German Foreign Minister Heiko Maas, the official position of Berlin on this issue.


And what else, in fact, do you order? It’s certainly not personal opinion and not political PR, since Herr Maas, categorically rejecting the idea of ​​a hypothetical “nuclear-free status” for his homeland, is opposing the leadership of the party to which he belongs. Consequently, Germany, in fact, makes its choice between war and peace. For the umpteenth time - the wrong ...

The head of the German Foreign Ministry expressed confidence that “the external policy and security actions ”of Berlin should by no means be a“ special German way ”, which includes“ unilateral steps that can undermine the trust of partners ”(presumably from the NATO bloc) and“ weaken this reliable alliance ”. No, Herr Maas is definitely not a “hawk” - on the contrary, he is the most sincere “dove of peace”, dreaming of “general nuclear disarmament” and even “actively promoting his theme in the UN”. However, according to some “logic” completely turned inside out, the minister immediately states that the refusal to store the US nuclear arsenal in Germany will in no way bring the world closer to getting rid of the atomic danger. More likely, on the contrary ... Now, if everyone had got rid of these weapons at once, then Berlin would have been happy. Next come the completely ridiculous messages in the style of “Guys, let's live in peace!”, Befitting perhaps a cartoon cat, and not the main diplomat of a leading European Union country. We must pay tribute to the opponents of Maas - Rolf Mutzenich, chairman of the Social Democratic Party of Germany (SPD) faction in the Bundestag and the SPD co-chair Norbert Walter-Boryans, who, unlike the Foreign Minister, argue their position on the issue under discussion very clearly and specifically. According to Mutzernich, the US B61 air bombs stored at the U.S. military air base Buchel in the Rhineland-Palatinate federal state, the exact number of which no one (or almost no one) seems to know in Berlin, provide Germany and its citizens with no security. On the contrary, they just make the Germans hostage to Washington's unlimited militaristic ambitions, which only a blind person can overlook.

Herr Walter-Boriance in his statements is even more categorical. He not only speaks out “categorically against the deployment of nuclear weapons, the right to dispose of them and, especially, their use”, but also puts the degree of danger for his own country directly dependent on the “perfect unpredictability” of the current head of the White House. As a matter of fact, the leader of one of the most influential political forces in Germany in this case really acts as a spokesman for the views of the absolute majority of its inhabitants. Back in 2019, the well-known organization Greenpeace ordered the Kantar Institute for Public Opinion Research to conduct a solid poll of them on this very burning topic. The result was completely unambiguous - at least 86% of Germans dreamed that star-striped “defenders” would remove their oversight-greeters to themselves across the ocean, without fail taking their own deadly arsenal with thermonuclear “stuffing” from the basements of Büchel. Based on this, it is not surprising that many German parties and social movements advocate ridding the country of extremely dubious "happiness" - to be one of the repositories for the B61. An example is the political alliance Soyuz-90 / Greens, the Left Party and several others. Moreover, back in 2009, when compiling a coalition for the formation of the government, it was precisely this goal that was set as a program goal in the corresponding treaty by both the liberals representing the Free Democratic Party of Germany (FDP) and the conservatives who entered into the union with them. By the way, the head of the diplomatic department in this government was none other than the current president of the country, Frank-Walter Steinmeier, who then advocated the withdrawal of American nuclear weapons from Germany as soon as possible.

Germany does not want to fight. But can it ?!

It would seem that in German society, which values ​​its own democracy so highly, there is a complete consensus - from the "bottom" to the "top". So what, one wonders, is Buchel still making the ill-fated B61 ?! However, according to some reports, they either moved or temporarily moved last year "to their homeland" - to the United States, where they were re-equipped with the latest guidance systems to make them even more deadly. There is information that this modernization was partially paid for by the “host” - that is, Germany itself. What is the key to this seemingly inconsistent behavior of Berlin? The answer, in my opinion, may well be the words of the expert of the German Green Party, who is responsible specifically for defense issues, Tobias Lindner that American nuclear bombs are “a symbolic payment made by Germany to have at least some right votes in the North Atlantic Alliance. " This contribution may be excessively expensive (according to Lindner himself), but it is precisely he who creates the illusion of Berlin that the global issues of war and peace (and, even more so, the conduct of NATO military operations, in which one way or another may be used nuclear weapons) will not be decided behind him by the member countries of the bloc, which are independent owners of such. The hope is rather dubious - given how many times the United States, the recognized "flagship" of NATO, has unleashed armed conflicts in which their allies had to "harness" one way or another. Take the same invasion of Afghanistan, where the Bundeswehr’s military eventually turned out to be. What did the Germans forget there? By and large, absolutely nothing.

One can recall more recent events - the irresponsible escalation of the situation in the Persian Gulf by Donald Trump, which miraculously did not end (until it ended ...) with an armed clash with Iran, against which in Berlin, and indeed in the European Union, were categorically against it. Did they listen to them strongly in Washington? Where is the guarantee that the situation in, say, Eastern Europe will not develop in exactly the same way? Having provoked a conflict there, the Americans may well require their German comrades to take B61 bombers into the air. And then what?! Moreover, in the opinion of the American “senior comrades,” Germany also must at its own expense renew the fleet of military vehicles capable of carrying these same bombs. As you might guess, the only alternative to morally and physically obsolete Tornado in the USA is seen exclusively by aircraft of their own production. If anyone does not know, the current debate in the Bundestag just started, in fact, after the deputies became aware that the German Minister of Defense, Annegret Kramp-Karrenbauer, bypassing the parliament sent a request to the Pentagon, in which the issue of acquisition was “ventilated” three dozen F / A-18 Super Hornet at the Boeing concern. What is the interest of Americans here, is visible to the naked eye. But why the Germans? And, by the way, the Frau Minister, under German laws, has the right to carry out such a “shopping” for billions without any right. Moreover, the Bundeswehr today is in dire need of a huge number of weapons and equipmentnecessary just for defense, and not for indulging the "Wishlist" of the overseas allies. According to the data given in the publication of the German publication Frankfurter Allgemeine, the local army has problems with literally everything from tanks and helicopters to night-vision devices. The coronavirus pandemic showed, to put it mildly, the dubious potential of military medicine. There are no modern air defense systems, warships. “Germany is unable to defend itself,” the publication concludes, shockingly.

Perhaps this is precisely one of the main reasons that Berlin cannot decide to withdraw from Washington’s “orbit” in the military sphere? It is only unknown how much they understand that this kind of dependence, on the one hand, guarantees security is rather doubtful, and on the other is fraught with very serious problems with Russia itself. However, some in Germany continue to cling desperately to the long-standing bugbear of the “Russian threat”, continuing in his name to campaign for an “inextricable alliance” with the United States, which supposedly “guarantees Europe’s peaceful life” with its “awesome military power”. In any case, this is exactly what the author of the article in the German newspaper Der Tagesspiegel, who has recently become the platform of heated debate on the "nuclear issue", Christoph von Marshall, claims. In support of this, he cites a full set of Russophobian duty stamps, a cry for “the Kremlin, which is constantly arming itself, improving its nuclear arsenal, fighting against Ukraine and organizing military exercises over and over again, during which aggressive actions against NATO countries, in particular, with the use of nuclear weapons against them, ”and blaming Rolf Mutzenich for“ losing his political orientation skills ”in that he“ stopped distinguishing friends and enemies, ”and“ speaks as if he lives on another planet. ” Well, one can think in such categories, while forgetting that there is another - a really reasonable way to ensure the security of Germany.

She would not need any nuclear bombs, neither her own, nor even foreign ones, if Berlin had normal relations with Moscow again. The situation is rather strange - on the one hand, German companies today complain to the German-Russian Chamber of Commerce (AHK) about the "huge losses" they incur due to quarantine restrictions imposed by the Russian government in connection with the coronavirus pandemic and demand from our state " significant support measures ”for their business in the form of“ reducing the tax burden, reducing social deductions, ”and even direct financial compensation. On the other hand, official Berlin in no way wants to abandon the anti-Russian sanctions imposed on it, again from Washington.

Germany's time to finally decide where its real interests are and what its security is. Twice in the last century, it converged with our country in world wars, the benefits of which were gained by Great Britain and the USA. Twice suffered a crushing defeat. The misunderstanding of the fact that today they are again trying to push her onto the same disastrous path smells of some suicidal tendencies.
Reporterin Yandex News
Reporterin Yandex Zen
9 comments
Information
Dear reader, to leave comments on the publication, you must sign in.