US has identified a scenario of confrontation with China 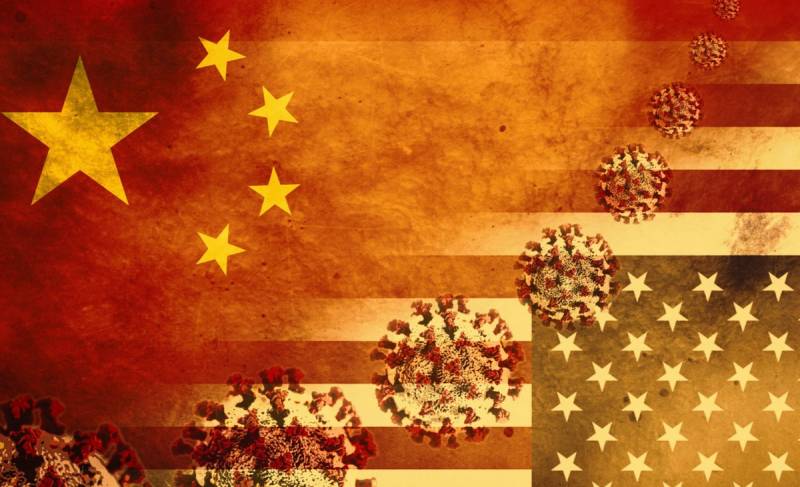 A statement made the day before by US Department of State head Mike Pompeo in which this high-ranking US official unequivocally accused Beijing of causing the global COVID-19 pandemic means that after weighing all the pros and cons, it seems that it has calculated the possible consequences and the results of their actions, in Washington, nevertheless, decided to embark on an extremely tough confrontation with the Celestial Empire.


There is a huge difference between talking about the “wrong trade balance”, claims in the field of intellectual property rights and the same kind of nit-picking, which by and large are small things, and the official accusation of the country that it became the source and root cause of the disaster that claimed hundreds of thousands of human lives around the world. What could this step lead to?

In fact, Mr. Pompeo, making a statement that is actually a declaration of war on China, does not support him with any special evidence. Yes, actually, not at all! His speech on the ABC News channel on May 3, during which they sounded in full cliches he almost repeated from the beginning of the pandemic, but is extremely confused and chaotic. In some places, the head of the State Department even contradicts himself. “We have significant evidence,” “that the whole world now sees this out of the walls of that laboratory in Wuhan” - and so on, in the same spirit. At the same time, Pompeo continues to defend the opinion about the artificial origin of the coronavirus - after all, it is allegedly expressed by almost “the best scientific minds of mankind”. True, he, as a schoolboy trying to cheat on an exam, is easily caught by an interviewer in the studio: “How is it, Mr. Pompeo, because the American intelligence community has decided that the virus is by no means man-made ?! Are you not familiar with his report? ” The head of the State Department immediately replies: “How, how ... I read something like that, I remember. And I have no reason to disbelieve our glorious “knights of the cloak and dagger.” Anyway, as a high-ranking official admits, he does not have evidence that infection of anyone outside the Wuhan Laboratory was intentional. However, in his opinion, all this has absolutely no meaning. In any case, the Chinese Communist Party, which “impedes the investigation” by closing the road to the country “to our experts who want to get answers to all their questions”, is to blame for the nightmare that is happening all over the planet today. Therefore - guilty!

Beijing’s reluctance to host any visiting “investigators” is more than understandable. Including specialists from WHO, which not so long ago, Mr. Trump firmly "put" the mind in the simplest and most effective way - "hit the dollar." And having hit very painfully ... These will probably be investigated! In the "authoritative conclusions", originally dictated by the same State Department and the White House, it is written that you bear the saints. Regarding how the Americans and their loyal allies show virtuosic abilities in the difficult task of adjusting the task to a pre-prepared answer, the best example is the story with the same notorious report of the American intelligence community. If anyone does not know, it consists of 17 United States agencies conducting intelligence activities - from the well-known to all the CIA and the FBI to much smaller "offices" of the corresponding profile, operating in the structures of the State Department, the Department of Energy and even the postal service. It is well understood that all of these organizations are working to develop a single policy, and, accordingly, a consensus. On April 15, General Mark Milli, who chairs the United States Joint Chiefs of Staff, made a statement stating that "US authorities tend to consider COVID-19 a natural virus," but "intelligence is still working on this issue." And two weeks later, the directorate of the Director of National Intelligence of the United States, in fact, at the head of the entire American community of intelligence, spread the message that the secret war professionals "agree with the scientific consensus that the coronavirus was not created artificially and was not modified intentionally." However, attention! “They are investigating the leak of a virus from a laboratory in Wuhan.” That is, they decided on the scenario.

And just the other day, the British Daily Telegraph makes a clearly well-planned and coordinated “stuffing”: it turns out that representatives of the famous spy alliance “Five Eyes”, combining the special services of the USA, Great Britain, Canada, Australia and New Zealand, have already prepared a very thorough one (about a dozen pages) a report in which "irrefutably proved" that the initial outbreak of disease in Beijing was hushed up, as well as its ability to be transmitted from person to person. In addition, "the PRC authorities silenced local doctors or physically eliminated them," "deliberately destroyed laboratory data and relevant research materials," and also "refused to transfer virus samples to countries working on a vaccine against it." Moreover, according to the “specialists” from the “Five Eyes,” the Chinese National Health Committee at the initial stage of the Wuhan epidemic, on January 3, demanded that all coronavirus samples be destroyed and in no case should a single drop of information about the infection appear! But this, my sovereigns, is "pulling" not even at The Hague, but almost at the new Nuremberg, which, apparently, in Washington firmly set out to organize China, and, above all, its state-party leadership. Everything that happens looks like a carefully worked out scenario, clearly implemented in accordance with pre-scheduled stages. Judge for yourself: on April 30 at a briefing at the White House, Donald Trump says that he "saw evidence" that the virus is nevertheless a product of a laboratory in Wuhan. Then comes the Five Eyes report. Now here is Mike Pompeo’s extremely aggressive demarche. Everything goes according to plan? Most likely, this is the case, and now Washington, which has openly “thrown the glove” to the Celestial Empire, has only the last thing left - the choice of weapons.

Everything will begin, for sure, with a blow in a purely economic the plane. At the same time, Larry Kudlow, an adviser to the US president in the field of economics, said that the United States would not refuse to pay its own debt obligations (at least, at the initial stage of the conflict), because trust in government bonds of the US Treasury should be “sacred” . Trump himself, in response to a question about the possibility of “throwing” the Chinese comrades, leaving them sadly sitting on the bag with Washington's debt receipts, said that he intended to “do the same and even more,” but so far “solely with the help of duties” . According to him, the same trade deal that the USA with such pressure and temperament sought from Beijing and the first phase of which was signed with great difficulty at the beginning of this year, is now "secondary" - in comparison with those "incalculable suffering" and "invaluable damage to the American economy ”, which allegedly blame China. The global economy, which is now extremely unbalanced and rapidly plunging into the abyss of an unprecedented recession, a swap between its two main “pillars” will definitely not benefit. However, on this score there is a wonderful Russian proverb: “Dashing trouble began ...” About the more than serious danger that the process of sharp aggravation of confrontation initiated by Washington, getting out of control over time, can lead to completely unpredictable consequences and even begin to develop for the worst, but for the most disastrous option, today many experts say. In particular, the prominent American economist Nuriel Roubini is confident that the extremely “harsh” decisions being made now in the White House and the State Department will cause not only a “trade, investment and monetary gap” with Beijing, a refusal to exchange data and technology, but also over time, the cessation of normal relations between countries in the diplomatic field.

In fact, the expert predicts the world a new "cold war" in its worst manifestations. At the same time, Roubini is sure that the Celestial Empire will not stop there. Having finally “dug up the ax of war”, the United States will begin to act in exactly the same, if not even more stringent, methods against Russia, Iran, North Korea, Venezuela and all other countries that it considers to be its own enemies. Such a buildup of confrontation, according to Roubini, will inevitably lead to a “surge in covert military operations,” which, having begun in the virtual plane of cyberattacks, may well reach more than real armed clashes. Given the military capabilities of potential adversaries, the outlook is not at all bright ... At the same time, serious concern is that China in this situation, apparently, is not only not going to accept the role of a “whipping boy” imposed on him (and why?) but, it seems, he intends to act more and more harshly and aggressively, discarding the previously “restraining rules of the game”, which Beijing tried to adhere to, hoping for peaceful coexistence with the “collective West”. April 17, he announced the "accession of new islands in the South China Sea", proclaimed "districts of Sansha city in Hainan province." The opinion of the Vietnamese, Malaysia or Philippines Chinese comrades, apparently, is no longer of interest at all. They were not impressed by the sending to the "controversial" water area of ​​as many as three US Navy ships - USS America, the Bunker Hill cruiser and the Barry destroyer, which in Washington was arrogantly called the "message to Beijing." It’s very similar to the fact that the addressee like, as they say in the USA themselves, “messengers”, sorry for the expression, saw in the coffin, as well as all the American “incomparable naval power”.

Does everything happening relate to the interests of our country? Without a doubt, the most immediate. Russia simply does not have the slightest chance to avoid being drawn into a geopolitical conflict of this magnitude. Will its results be positive or negative for us? There is something more difficult to assume. One thing is for sure - even with the end of the COVID-19 pandemic, you can’t wait for a quiet life on the planet.
Ctrl Enter
Noticed oshЫbku Highlight text and press. Ctrl + Enter
We are
Ukraine from the inside: traitors, curators and those who watch from the Kremlin
Ten "defeats" of Putin
Reporterin Yandex News
Read Reporterin Google News
4 comments
Information
Dear reader, to leave comments on the publication, you must sign in.