Why the T-14 Armata tank is ridiculed in the world 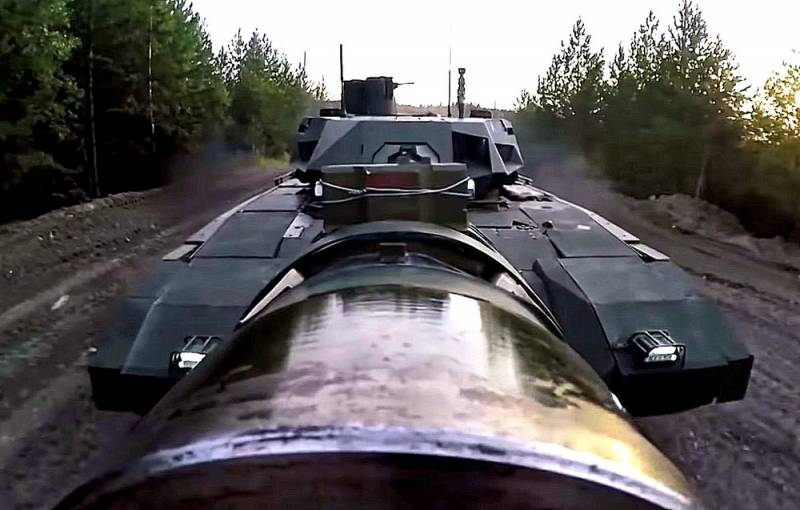 Recently, modern models of Russian weapons, for example, a fifth-generation fighter Su-57 and a T-14 tank, have undergone a real information attack in the foreign press and blogosphere. Most of all came from the ill-wishers of "Armata", which either the terrorists in Syria had already hit, or not, and it is not clear to the end whether she was there at all in the battle.


What can be behind these attacks, and how well are they justified?

Objectively, the T-14 is an advanced tank that has no real analogues in the world. Thanks to the uninhabited tower, its crew has been reduced to 3 people, and they are all safer in the armored capsule. Widely applied Technology active and passive defense, the tank is armed with a powerful cannon and can be used for reconnaissance and fire control of other armored vehicles: T-90, self-propelled guns and air defense systems. On the basis of the Armata platform, other types of combat tracked vehicles can be built.

The main drawback of the T-14 is its high cost, but it can be attributed to its advantages that it has long passed from the perspective drawings to the “in iron” stage. The first batch has already been created, the tanks are being tested. Let them call them “ceremonial”, let certain flaws may be revealed in them, but they exist, but the competitors have nothing of the kind and are not expected in the near future.

Perhaps this is precisely the reason for the active criticism of the project abroad. For example, Defense Express countedthat the Russians simply “borrowed” Ukrainian developments:

“Armata” is only the implementation of the project of the sunset of the USSR. Namely - the project of the Kharkov Design Bureau of Mechanical Engineering named after Morozova - Object 477 Hammer.
The statement is very ambiguous, given that Russian and Ukrainian tank building come from the same Soviet root, namely, the Russian Federation is the successor to the USSR, if someone suddenly forgot.

Also on Youtube out clearly an amateur video, which compares the stabilization of guns of different types of tanks after a shot. Despite the obvious fact that the T-14 weighs 15 tons less than its potential adversary M1A2 Abrams, the Russian tank was “dry-defeated” in this respect by the American, as well as the South Korean K-2 Black Panther and the Chinese Type 96 and Type 99.


Very interesting is the reaction to Armata in the PRC. Beijing’s most advanced Type 99 tank is an upgraded version of the Soviet T-72. The Chinese edition of Sina, like many, did not believe that the T-14 was baptized in Syria. At the same time hastened to declare about four wrecked "Armata" in the mountains of Latakia province. The same publication called on Russians to "publicity and transparency" to identify and address the real weaknesses of the tank. It is possible that the Chinese comrades will not mind after having a closer look at the design of the T-14 and "be inspired" by its ideas.

Not without interest in the West, they also accepted the opinion of the former US Marine Alex Hollings, published on the Sandboxx portal. That считаетthat due to the lack of mass production of the T-14 does not have real military potential. Of course, no substantial arguments in favor of such a statement were made.

To summarize what has been said, it turns out that the Armata is an advanced tank that really has no analogues in the world. About something like that now trying to agree between Germany and France, but the matter is very slow. The T-14 has potential that remains to be known. Despite the difficult start, you can’t put an end to it, the tank must be run in, eliminating the flaws. It is likely that the T-14, like the Su-57, will be an intermediate option on the way to an unmanned robotic heavy combat vehicle.
Reporterin Yandex News
Reporterin Yandex Zen
36 comments
Information
Dear reader, to leave comments on the publication, you must sign in.