With the arrival of Academician Chersky in the Baltic, the most interesting will begin 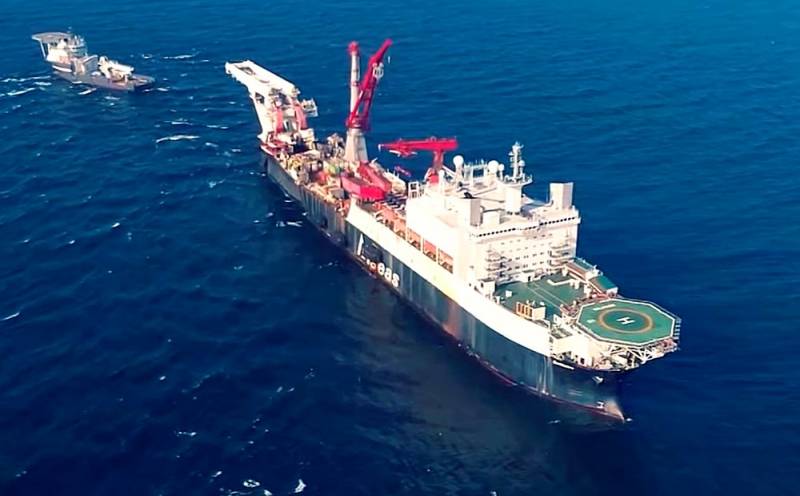 The three-month odyssey of Academician Chersky is nearing completion. Passing Africa along the longest route and passing the English Channel and the Danish Straits, the pipe-laying vessel will arrive in Kaliningrad by May 4. There it should be retrofitted, since it is obvious to everyone that Akademik is the only vessel in the Gazprom fleet that can complete the construction of Nord Stream-2.


However, the situation is such that with the end of the Odyssey, all the fun is just beginning.

The first question is whether it is necessary to complete the pipeline now, which hangs at the stage of readiness of 93% due to US sanctions? The answer will not be entirely clear.

On the one hand, the time to launch this energy project is, to put it mildly, not the best. According to various estimates, due to the coronavirus pandemic, the world economy may lose 10 to 15% of its volume. The biggest blow COVID-19 struck its main "locomotives" - China, the United States and the European Union. At the same time, China and the EU are the largest markets for Russian hydrocarbons, and the United States is our tough and unprincipled competitor to them. Gas and oil prices are now at historic lows, demand has fallen sharply, markets are overstocked. Frankly speaking, the time to launch the next gas pipeline is not the best.

On the other hand, sooner or later, but the world economy will begin to grow, and with it the volume of hydrocarbon consumption will increase. The preliminary dates are 2-3 years of low oil and gas prices, perhaps they will be adjusted in one direction or another due to the new “black swans”, which turned out to be so rich in a leap year 2020. For modern Russia, tightly seated on an oil and gas needle, the struggle for markets for raw materials is a matter of banal survival. And one has to remember about international prestige: if you abandon an unfinished pipeline now, it means additional image losses.

In general, Gazprom will try to complete the construction of Nord Stream-2 on its own. However, this solution will trigger a whole chain of events. The United States and its allies did not try to counteract the movements of the Academician Chersky, since he preferred not to go through the Suez Canal and Gibraltar, where the Anglo-Saxons had great influence, and the ship was accompanied by warships of the Russian Navy. But now, when the ship is at the place of arrival, most likely active actions will begin on the part of the Americans. There are several options.

At firstWashington, by its influence, may prohibit insurance of a pipe-laying vessel. Russian companies who are not afraid of Western sanctions, for their part, will be able to give him insurance. It is possible that US warships will try to block the work of Chersky, which violates the sanctions regime, in Danish waters. It is clear that the Baltic Fleet of the Russian Federation will not stand aside, therefore there is a risk of direct conflict. Today, the White House does not need a violent clash with Russia, so this scenario is the least likely.

Secondly, The United States is able to hit not on the pipe-laying vessel, but on the entire project as a whole, and to do this not by military means, but by political and economic methods. Washington may expand sanctions on Gazprom and all its pipelines by requiring European consumers to abandon the purchase of Russian gas. This is also a very tough option, although more realistic than naval battles in the Baltic. In fact, we will talk about Trump’s ultimatum with a demand to break all ties between Europe and Russia. Given the current state of the EU, unanimity and complete obedience cannot be achieved. Is the White House ready to embark on such an exacerbation with poorly predicted consequences?

Thirdly, the scenario with a “soft capture” of Russian pipelines in Europe is starting to appear more and more realistic, about which we detail told earlier. The share of Gazprom in the Nord Stream-2 is 50%. The US and its allies claim that the Kremlin is using its influence to exert political and economic pressure on Europe. And then, the decision of the Stockholm arbitration in favor of Poland in the amount of almost $ 1,5 billion in a lawsuit against the Russian monopolist arrived in time. Warsaw demands the seizure of state-owned assets, among which are Nord Stream-1 and Nord Stream-2. ” The subject of interest of the Poles is understandable.

It can be assumed that in the future, during the negotiations between the United States, Poland, Germany and Russia, a certain consensus will be worked out on which Warsaw’s claims will be satisfied at the expense of a part of Gazprom’s share, which will seriously “be washed out”. Then, Nord Stream-2 will turn from a Russian-German project into an international one, which will allow the United States to influence its work through union Poland.

Other options are also possible; soon we will find out how true our estimates and hypotheses turned out to be.
Reporterin Yandex News
Reporterin Yandex Zen
9 comments
Information
Dear reader, to leave comments on the publication, you must sign in.