The West is drunk at an accelerated pace, accusing Russians of alcoholism 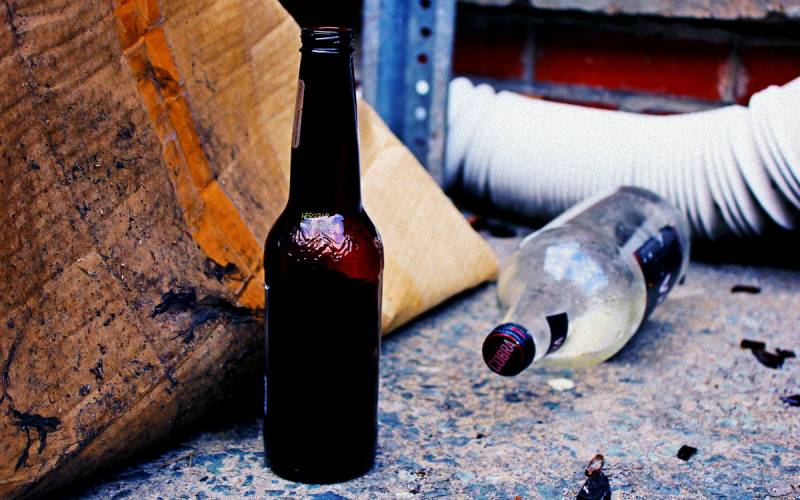 Recently, when familiarizing yourself with the next “masterpieces” of Western propaganda, it can be difficult to determine what causes a lot of confusion: the phenomenal ability of the authors to attribute their own problems to others or the stubborn reluctance to part with the usual cliches, let them be disproved and turned into a laughing stock already a thousand times?


The "sharks of feather" of the local media seemed to be so used to the textbook image of a "Russian barbarian" dressed up in a greasy three-piece jacket and padded jacket, whipping a terrible fowl in an embrace with his tame bear tearing a frustrated balalaika, which they can’t do with it break up, contrary to the obvious realities. It would seem that the topic of “total Russian drunkenness”, which has long lost its relevance, once again rises to their shield. Why's that? The answer, imagine, almost lies on the surface.

The COVID-19 pandemic today dictates to the media the absolute majority of their daily publication News and analytical articles. However, everyone finds their own aspects, their own shades in this burning topic ... The New York Times journalists, obviously, having pulled themselves hard, gave out "imperishable" with the following heading: "In Russia, the coronavirus pandemic is aggravated by mass alcoholism." Where did the data come from? What gives grounds for such categorical statements ?! Nothing even close to the statistics or research materials substantiating its meaning, in the article, of course, is not possible to detect. Moreover, the remnants of conscience and something similar to journalistic ethics, apparently lost somewhere deep down in our hearts, make Americans mention that “the fight against alcoholism became one of the main goals of the government during the presidency of Vladimir Putin” and even admit that "in comparison with 2003, the consumption of alcohol by Russians decreased by a third" (the figure is godlessly underestimated). However, the straightforward phenomenal “trick” in the field of logical constructions follows: “fears are increasing all over the world” that quarantined humanity is “hugging with a bottle”. But it turns out that it was precisely in Russia that they “became a reality” - because of the “habit of some people having big drinking bouts during the holidays”. According to the authors of the New York Times, declaring days off, the president literally pushed the country into the arms of the "green serpent"! The following is data from some obscure “marketing company,” which claims that vodka sales in the country “jumped 65% in the last week of March.” Obviously, they are intended by journalists and should serve as evidence of "general drunkenness." Excuse me, but these figures do not correspond to reality at all! Moreover, Americans climbing into the “Russian theme” should remember that in our country at the end of March there are, first of all, Easter holidays, traditionally associated with crowded feasts, at which after the end of Lent a categorical ban on alcohol was lifted. Connoisseurs ...

Nevertheless, such “trifles” as national customs and traditions do not bother anyone. To mix up coronavirus, “traditional Russian drunkenness” and references to again some “activists” who claim that “after the epidemic we will all have a wave of alcoholism and domestic violence” - the Russophobic libel for the broad American masses is ready to be whipped up in haste ! However, the “bison” of the propaganda war with Radio Liberty goes even further than its colleagues from the New York Times. Those prophesying to our Motherland "an explosion of protests due to restrictions on the sale of alcohol." At the same time, again, albeit reluctantly, an obvious fact is stated: “state policy led to a sharp reduction in the volume of alcohol consumed in Russia. " For some reason, specific figures are not called, and it is understandable why. According to a statement made back in 2018 by the then domestic Minister of Health Veronika Skvortsova, by this time the number of nationwide “liters” of drunk “strong” drinks had halved in comparison with 2011! Don't like official statistics? Here are the figures from WHO: only for the period from 2003 to 2016, drinking in Russia decreased by 43%. Accordingly, mortality from it decreased by 39% in men and 36% in women. Nevertheless, Radio Liberty, without blushing at all, continues its material with the assertion that "alcohol abuse remains the national problem of Russia" and "the country is among the world leaders in the number of deaths associated with it." Firstly, there are a great many ratings on this topic - and half of them contradict one another. And secondly, in the "Top 10 countries dying from drunkenness", compiled a couple of years ago by the American publication The Lancet, the United States "escaped" from our country, except for a couple of positions. So whose cow, sorry, mumbled ?! Nevertheless, the “Svobodovites”, sparing no color and referring for some reason entirely to unnamed (and quite possibly not existing) characters like “a resident of Chita, who called himself Sergey,” or “a blogger from the capital of Khakassia,” paint a picture of “anger and sabotage ”of Russians opposed to restrictions on the sale of alcohol introduced during quarantine in some regions and“ buying up vodka in boxes ”.

From a drunken head to a sober?

Why did the leading media of the West suddenly again begin to eagerly exaggerate to the limit the threadbare and pretty lost topic? And even trying to reduce everything to "predictions" about the upcoming "alcohol riots" in Russia? The same "Radio Liberty" diligently cites examples of Russian regions where local authorities have somewhat narrowed the possibilities of residents to "stock up" with a bottle or two of hops at the first whim, exposing them as examples of "tyranny" and the desire to "close and tighten everything." There, in Krasnoyarsk, the local residents are so unhappy that they collected as many as 250 pages of signatures under the “petition demanding to lift restrictions on the trade in vodka!” Look and look, they will start building barricades, and there they will go on a campaign ... One gets the impression that they are tormented by the wait, when the Russians, having decided to commit the whole country to collective suicide, will commit another Troubles, Western gentlemen are engaged in self-comfort, coming up with more and more new ones for it. occasions. However, in this particular situation, this is far from just this. The COVID-19 pandemic really led to an aggravation in human society of, say, not too positive things and phenomena - I, however, already wrote about this. The only thing is that such things are happening not so much in our Fatherland as in the West, which until now has not missed a single chance to blame us for “uncivilization”. It somehow turns out to be very inconvenient and insulting for “carriers of universal values” - so they are trying, as usual, to shift everything from a sick head to a healthy one. More truly, speaking in relation to our subject - from drunk to sober. What did the New York Times say about “increasing vodka sales by 65%”? First of all, these statistics, as I said, are rather dubious. For example, according to the marketing company Nielsen over the last week of March, sales in Russia of vodka increased by 31%, beer - by 25%. According to other estimates, in comparison with the beginning of March, purchases of alcohol increased by 18%.

But what about the same situation in the West? First, let's look at the statistics provided by the same Nielsen, but already for the United States. The picture there, frankly, is somewhat different. In the week leading up to March 21st, Americans were buying 55% more energetic than before the start of the month. In particular, wines purchased more by 66%, beer - by 42%. Strong alcohol went even better - its purchases increased by 75%. At the same time, online alcohol sales jumped 243% in the USA! In general, the volume of hop sales in March there at least doubled. Britannia? Around the same situation. The local sirs and ladies were left in wine shops, whose revenue increased by 31.4% in March alone. That’s 1.1 billion pounds! An absolute record from the moment when the National Statistical Office of the country generally began to conduct such statistics (1988). At the same time, food sales for the same period increased by only 10%. This is in Britain, where anyone who drinks more than 6 glasses of wine (or their equivalent) per week is considered a drunk. The English department of Alcoholics Anonymous reports that the number of calls for help on its “hot lines” has recently increased by almost a quarter. In general, it is not surprising ... In Italy, Spain, France, Germany, the demand for wine doubled, and in Australia it came to the point that for the first time in history the authorities had to impose restrictions on its purchase - no more than 10 bottles in one hand. Even in pastoral Switzerland, the local organization for combating harmful addictions, Sucht Schweiz, sounded the alarm, saying that people who had a tendency to it, as well as doctors who were “forced to relieve constant stress” became much more “lay behind the collar” .

However, the "coronavirus one hundred grams" - this is not so bad. According to The Wall Street Journal, in the United States the volume of orders placed on online platforms for marijuana has increased by 230% - naturally, in the states where this drug is legalized. Given that in the same California demand for cannabis skyrocketed by almost 160% by mid-March, it remains only to be quietly horrified. By the way, in San Francisco, shops selling legal "foolishness" stores were included in the list of outlets of "paramount importance", which were allowed to continue working, despite quarantine. There is nothing to be surprised at - according to the data of the National Report on Drug Use and Health in the USA, prepared back in 2018, more than 43 million residents of the country smoked weed. We emphasize that the data presented in this document covered people from the age of 12 ... Generally speaking, in the Western world, even before the pandemic, with leaps and bounds moving towards the wider legalization of “soft drugs”, the demand for marijuana, which allows poor Americans, Canadians and Europeans to "remove the anxiety caused by the coronavirus and relax," according to industry experts, it has grown literally at times.

Here is the answer to the question: why should the American media try to make the nation “drunkards” of Russians and vying with each other to tell their readers and listeners about their “total alcoholism”. And so they themselves do not look so shameful!
Ctrl Enter
Noticed oshЫbku Highlight text and press. Ctrl + Enter
We are
“With Russians it’s worth playing fair or not playing at all”
Where is Russia going?
Reporterin Yandex News
Read Reporterin Google News
7 comments
Information
Dear reader, to leave comments on the publication, you must sign in.