Why did Putin decide to remove President Assad? 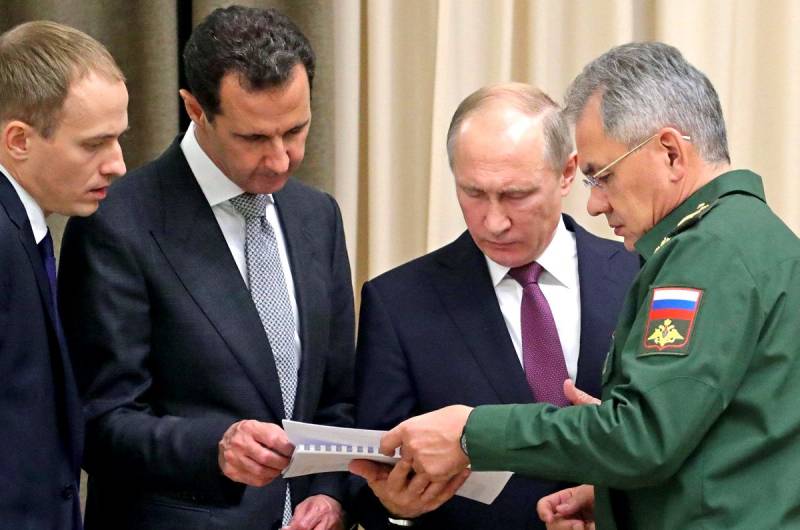 After the talks between Presidents Putin and Erdogan on Idlib, the situation in Syria froze in a precarious balance. The presence of Turkish and American military in the north and east of the country, respectively, impedes the reign of peace in the SAR. Bashar al-Assad is eager for battle, and there is intelligencethat some external players, for example, the UAE, are ready to sponsor a new war in order to draw the attention of Turkey from Libya.


And against this background, the Russian press is simultaneously publishing a mass of publications exposing the "weakness and incompetence" of President Assad, theft and corruption at the highest level, hampering the restoration of Syria. What is it for?

Israeli Channel 12 drew this audience’s attention to the conclusion that President Vladimir Putin, who had previously saved the regime of Bashar al-Assad, was tired of him and was preparing for a change of power in Damascus. MiddleEastMonitor Edition refers for publication in the Federal Agency News (FAN), owned by “Putin’s cook” Yevgeny Prigozhin, which says that cooperation between Moscow and Damascus is hampered by rampant corruption in Syria.

Here are a few facts from this article and others posted in other domestic media. For example, FAN Evgeny Prigozhin condemns Syrian authorities for stopping gas production, which increased the number of hours of power outages (the original publication from the FAN website was apparently deleted, but reprints remained on the network). At the same time, Damascus is blamed for the fake about the seizure by terrorists of the village of Es-Sukhna near the field, which was subsequently denied by Russian journalist Oleg Blokhin. Despite the Kremlin’s help in freeing up territory and restoring infrastructure, the SAR government last year increased the cost of a gas cylinder from 2800 to 4000 Syrian lire, and on the black market this figure reached 15000.

The FAN found the reason for such price lawlessness in corruption at the highest level. It turns out that the head of the Cabinet of Ministers of the SAR, Imad Khamis, directs oil and gas revenues into his pocket, and not into the country's budget. Famous Syrian oppositionist in exile Kadri Jamil comments on the situation as follows:

Before the crisis, the level of corruption in relation to the national income of the gross domestic product, according to my calculations, was 30 percent. Now, in the wake of the crisis, God knows how much. If there were 2-3 billionaires in Syria, then now, during the crisis, there are several dozen of them, and the people are poor, the standard of living is falling catastrophically.

Barely regaining control of the fields, the SAR government renewed a contract interrupted by the war for the supply of electricity to neighboring Lebanon. While ordinary Syrians are sitting without electricity, the country's top government officials receive their interest “on pocket” from export. The FAN also accuses Prime Minister Khamis of reselling Iranian oil, which Tehran supplies as aid, to Turkey, to structures owned by President Erdogan’s son, as often happens, to the talented businessman Necmettin Bilal Erdogan.

The Russian portal Pravda.ru also joined in exposing corruption in the Syrian tops. Edition went through according to a close relative of President Assad, Rami Makhluf, who was put under house arrest some time ago. His 22-year-old son, Mohammed, openly boasted of the wealth of his family, posting hundreds of millions of dollars worth of photos of his luxurious cars, villas and other real estate on social networks. It is believed that before the war, cousin Assad Rami Mahluf controlled about 60% economics ATS Journalists of the Russian portal suggested that his “arrest” was a spectacular performance.

Another relative of Bashar al-Assad, General Maher al-Assad, the publication accused of becoming a billionaire on the smuggling of cigarettes and food into Iraq during the reign of Saddam Hussein, and then increased his fortune due to fraud with Al-Madina bank. President Bashar al-Assad was personally blamed in the course of this information attack that he bought his cancer-ill wife, Asma, a $ 30 million painting while "the Syrian people are drowning in a quagmire of poverty."

If all these accusations are true, then this, of course, does not paint the Syrian authorities. But it should be noted that corruption, the protection of business by “siloviks”, the theft of budget funds, the distribution of multibillion-dollar contracts and state contracts to “the right people”, the impoverishment of the people against the background of kitsch oligarchs and their children-majors with their wealth, occur in some other countries.

Israeli media put forward versionthat such a “run over” to Damascus is connected with the Kremlin’s desire to replace Bashar Assad with another president who would suit both Russia and the USA. Among the candidates are the commander of the Tiger Force Suhail al-Hasan, who managed to receive awards from the Russian Defense Ministry, and the former Syrian opposition leader Ahmad Jarba.
Ctrl Enter
Noticed oshЫbku Highlight text and press. Ctrl + Enter
We are
Ukraine from the inside: traitors, curators and those who watch from the Kremlin
Ten "defeats" of Putin
Reporterin Yandex News
Read Reporterin Google News
28 comments
Information
Dear reader, to leave comments on the publication, you must sign in.