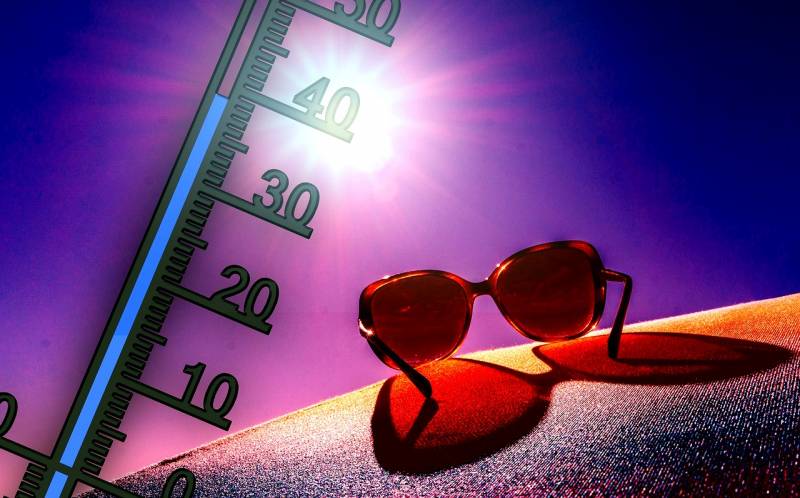 Ahead of the May holidays, when many Russians, tired of "self-isolation", rush to the nature for barbecue, and gardeners take seedlings to their suburban areas. According to all forecasts, the approaching summer may set another temperature record, becoming the hottest in the history of observations. This threatens the country with drought, crop failure, forest fires and increased stress on health.


However, as they say, there is no silver lining. Already, there are suggestions that the coronavirus pandemic in the hot summer season may recede faster than expected. What are the reasons to think so?

The fact that everything is going to an abnormally warm summer, we detail told earlier. The temperature on the planet is growing significantly; January, February and March 2020 showed record and close values. Due to the small amount of snow in the winter, in many regions the soil is deficient in moisture, which creates the conditions for drought and crop failure, as well as fires, steppe and forest. In addition, oceanologists warn that the risk of such a phenomenon as El Nino is high: the equatorial waters of the Pacific Ocean can release large amounts of thermal energy into the atmosphere at once.

Most in this situation, multi-million cities are affected, turning into a smoky human "anthill", the inhabitants of which for the most part are unable to escape from it and remain suffering from smog and heat. It is enough to recall what happened in 2010 in Moscow and the cities of the Moscow Region. Then forests and peat bogs were seriously burned, the capital of the country was clouded by a burnt place and fog for several weeks. There are cases when people died, literally suffocating in a dream because of a sharply worsened environmental situation. Cores and hypertonics also died, people from heatstrokes.

The summer of 2010 was slightly better in the northern capital, according to the local Hydrometeocenter:

On August 7, the absolute maximum of air temperature was recorded, recorded in St. Petersburg for the entire time of instrumental observations of the weather - 37,1 degrees. The previous record - 35,3 degrees, set in July, did not last a month. On August 8, the maximum of this day, held since 1972, was again exceeded. The thermometer on this day showed 33,7 degrees.
Unaccustomed to the heat, residents of St. Petersburg compared the air of the city with "boiling oil." There is a risk that today, 10 years later, everything may happen again. According to weather forecasts, the summer will be very unstable: the weather, for example, in Central Russia can rapidly jump from summer to autumn and vice versa. Spring in the Moscow region will be late: “May” will last in the capital until mid-June, possibly even longer. The weather is expected to be rainy and windy, with an average temperature of 15-17 degrees. The middle of the month will be hot, the thermometer will reach plus 30 Celsius during the day and 17 at night.

The coming summer may well repeat the 2010 records.

In early June, meteorologists promise Muscovites and residents of the region a “spring layout”: during the day the air temperature will not exceed 16-19 degrees on average, with only small take-offs up to 27 degrees. From the middle of the month, unusual heat will come to the region of the capital. Forecasters say about 30 degrees above zero, just like in Sochi.

July and August also do not bode well for Muscovites. Daytime temperatures stably above 30 degrees Celsius will become commonplace in these months. In a metropolis, such heat will not be easily tolerated, especially by older people. Against this background, the risk of burning of peat bogs near Moscow increases many times.

One of the dubious advantages of the coronavirus pandemic is that most of the population now has medical masks available that can partially ease breathing with smog and the smell of burning in the air. By the way, with their help, Muscovites were saved 10 years ago. There is another good news. It is likely that the advent of the warm season will help stop the spread of COVID-19. It has long been noted that in the summer, colds take less lives than in the winter. At the same time, the number of people who can be infected by the infected is reduced. There are a number of hypotheses that are trying to find an explanation for this.

According to one of them, it reduces the activity of ultraviolet viruses, it also helps in the summer to produce more vitamin D in the body, increasing immunity. Another hypothesis explains the decrease in the scale of epidemics in the summer by the fact that people spend less time crowded indoors, for example, children at school or students at the university, where in the winter they can more easily become infected and transmit the disease to other family members, and so on along the chain. Studies were conducted on guinea pigs, confirming that some seasonal viruses die faster in warm and humid air. At a temperature of plus 20 Celsius, infection occurs with a probability of 50% less than at a temperature of plus 5 degrees. It was noted that, at low temperatures, guinea pigs remained potentially infectious for longer.

These hypotheses have their strengths and weaknesses, but they are all based on the fact that in summer epidemic activity is markedly reduced. Which is very desirable in order for the coronavirus to be quickly taken under control, and the planet began to return to a full life.
Reporterin Yandex News
Reporterin Yandex Zen
Information
Dear reader, to leave comments on the publication, you must sign in.