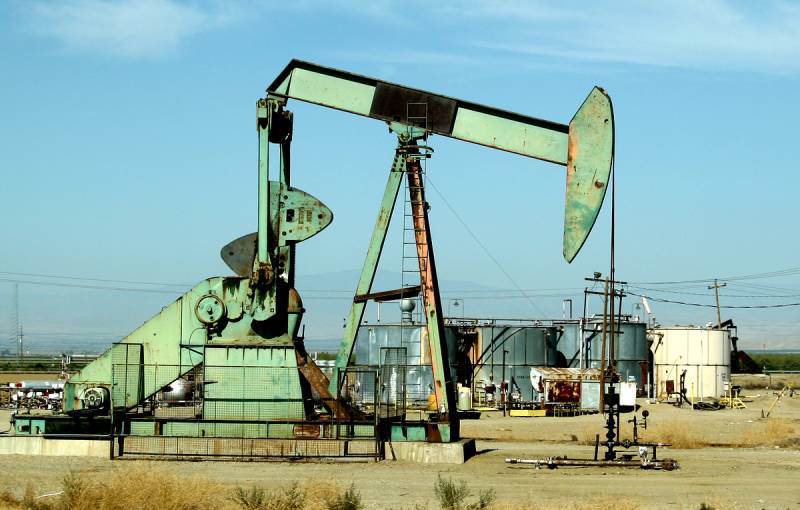 The collapse that hit the energy markets on April 20 was just a dress rehearsal for the global collapse that awaits the entire world oil and gas production industry in the foreseeable future. No negotiations and deals to reduce the volume of raw materials pumped out of the earth’s bowels will no longer help. The impending catastrophe can neither be prevented nor even delayed. You can only survive it ...

The oil storages of the whole Earth are crowded. In this case, it is not an artistic metaphor, not an exaggeration, but a literal statement of an extremely sad fact. Goldman Sachs Group Inc. estimates that since the beginning of this year, 700 million barrels of “black gold” have already been pumped into them, which no one wants to buy. 250 million barrels today “hangs” across the seas and oceans in the holds of tankers, which, in fact, have nowhere to sail. At least 20 such oil "flying Dutchmen" with 20 million barrels on board drifted off the coast of California, more than three dozen crowded similar poor fellows off the coast of North-Western Europe, more than a hundred in the vicinity of the port of Singapore. The reason for this is not just a fall, but, in fact, a complete lack of demand for hydrocarbons. Rystad Energy estimates the reduction in consumption caused by the global coronavirus pandemic at 20 million barrels per day, and Trafugura at 35. The International Energy Agency says oil demand has fallen by more than 30% from the usual volume.

Among analysts, there is currently only debate about exactly when the tanks “filled under the cork” will take in the last ton, barrel, liter of “black gold”. Frightening forecasts vary slightly. Using satellite imagery data from Oilx oil storage facilities, it takes six weeks to fill them. The same Goldman Sachs is even more "optimistic": three weeks, a month on the strength - that's all. In mid-May, the market will lose the need for another 18 million barrels daily, after which at least every fifth oil rig will have to stop on the planet. But even with this, there will be no shortage in the energy market, at least until June. The restoration of oil prices to real and acceptable positions for exporters may well drag on until the middle of next year. There are still too many “unknowns” for accurate forecasts - everything will depend on the speed of mankind's exit from quarantine and the economic crisis, on the volume and, again, the pace of resumption of transportation, especially aviation. It remains to endure and wait.

According to the latest information, the president of the country held a special meeting with representatives of the fuel and energy industry, primarily dedicated to the period of “turbulence” she was experiencing. According to Vladimir Putin, the world has not yet seen such large-scale problems that are “global in nature and far go beyond our national borders”. “Something unprecedented is happening with oil,” the head of state admitted. Nevertheless, Vladimir Vladimirovich is set up in the spirit of cautious optimism - he speaks of “reaching agreements and joint work on balancing the market” with foreign partners, and also promises “a number of other solutions” that will allow industry enterprises to develop in accordance with long-term production and investment plans . Russian Minister of Energy Alexander Novak also supports the position of the head of state. According to him, the peak of decline in consumption of "black gold" on the planet is already close and, having passed it, we can say that the worst is behind.

In total, according to Mr. Novak, the average annual decline in oil production in Russia will be no more than 10%. The minister is much more worried about the 30-40% drop in the oilfield services sector, which he considers necessary to be kept fully operational until a new increase in demand and, correspondingly, an increase in domestic energy exports. Alexander Novak is inclined to believe that a certain positive will appear after the first decisive steps taken by European countries to remove quarantine restrictions and the entry into force of the last OPEC + deal, and by the end of this year, a certain stabilization of energy prices can be expected. According to experts, a serious devaluation of the ruble (up to 100-110 per dollar), and, consequently, a significant drop in the standard of living of our citizens can be caused only by the long-term location of the cost of oil in the “zero” or even negative zone, which would lead to an average annual price on it from $ 30 per barrel and below. However, in connection with the world’s beginning to emerge from the period of the most severe restrictive measures associated with the pandemic, the absolute majority of economists consider such a “black” forecast unlikely.

The state, which has embarked on "spite to everyone" to flood the planet with super-cheap oil flows, is today reaping the fruits of its rather reckless actions. In March alone, Riyadh lost its own gold and foreign exchange reserves by a record amount of 2007 billion rials ($ 100 billion) since 27. The country has lost 5% of its own gold and foreign currency reserves, which ultimately decreased to $ 464 billion, which is the minimum amount since 2011. This clearly contradicts the plans and calculations of the local authorities - after all, last week the Minister of Finance of the country, Mohammed al-Jadaan, made a statement that the government intends to spend no more than 2020 million reais of its own “savings” throughout 120. The year is still very far from completion, but the announced figure has already actually gone into attempts to compensate for the decrease in the state’s oil revenues in the first quarter of 2020 by 24% and all others by 17%. For Saudi Arabia, whose budget is dependent on energy exports, perhaps even to a much greater extent than the treasury of our country, the situation looks extremely unfavorable.

Moreover, according to financial analysts, what is happening is only the beginning of problems. In any case, that's exactly what, for example, Bloomberg experts believe, calling the current situation only a “prelude” for Riyadh. In their opinion, the country will also see a reduction in its own savings associated with lower energy prices in the second quarter, when the Saudis will have to “get deeper into their own little pillow” to stabilize the domestic economic situation. However, Saudi Arabia today does not really rely on its own strengths - according to the same Bloomberg, only recently the country has twice entered the international bond markets and gained about 20 billion debts from local and international investors. Apparently, this can not be avoided in the future. In the end, the March expansion into energy markets with an increase in their production to 12-13 million barrels per day and the offer of unheard-of discounts to all buyers is very expensive for Riyadh. One can only hope that the correct conclusions will be drawn from current events there.

Back in February of this year, the production of "black gold" in the United States steadily kept at around 13 million barrels per day. However, according to the Energy Information Administration (EIA) of the US Department of Energy, this indicator has now begun to decline rapidly - since mid-March, the daily volume has decreased by 1 million, and over the past week it fell another 100 thousand barrels. Most likely, the estimates of the same EIA, which predicted an annual decline in black gold production in the country by 9,5% to 11,76 million barrels per day, followed by a decrease in 2021 to just over 11 million barrels per day, were too much optimistic. Analysts at IHS Markit Ltd believe that literally in the near future, drilling rigs that pump today 1,75 million barrels per day will most likely stop, and in general, the “minus” for the US oil industry will be at least 20% of its recent production. In the meantime, reports have already begun to come about American companies, driven by falling prices to complete ruin. So far we are talking about the "shale" of Whiting Petroleum and Continental Resources. But market experts in the US are already talking about a possible “chain reaction” in the industry.

According to experts of the American analytical and consulting company Rystad Energy, the price of oil from $ 10 and below a barrel will lead to the inevitable bankruptcy of more than 1,1 thousand companies involved in the extraction of hydrocarbons and are now in debt, as they say, "over the ears". Investors, who had so recently admired the prospects of the “oil shale”, are now beginning to shy away from it worse than from the coronavirus. The only hope for salvation for the industry in the country, where they so boast of strict observance of the "laws of the free market", remains government intervention. Washington, it must be said, is reacting rather peculiarly to what is happening - in particular, it became known that the US Futures Commodity Trading Commission announced its intention to initiate an investigation into possible violations of the law on commodity exchanges during the trading on April 20, when the price of May futures on the American WTI reached up to -40 dollars per barrel. However, the government also speaks of some "plans to save oil production." True, what exactly is being discussed is not very clear yet. US Treasury Secretary Stephen Mnuchin, in particular, said he was "exploring the many possible options," noting, however, that "a final decision has not yet been reached." Meanwhile, while debate and consensus-building are ongoing, American oil companies are approaching collapse every day.

Incidentally, according to the same Mnuchin, one of the options under consideration is the provision of federal credit lines to mining companies. However, this will most likely be done in exchange for a significant part of their shares, in fact, for transferring to the state a share of ownership in these companies. It should be noted that the “shale” has practically no other option to get help from the treasury. In terms of their size, they don’t really want to “small business”, to which the White House promises to send quite considerable amounts of support. Has Washington reached the point of nationalization, albeit partial, of its own energy sector? Incidentally, IHS Markit analysts, cited by German Die Welt in their publication on this subject, believe that Russia and Saudi Arabia are much more likely to survive a catastrophic drop in oil prices with minimal (if not critical) losses not only only because the cost of their energy resources is lower than American, and, above all, due to the fact that their mining enterprises are in the hands of the state, and not private owners, in the USA, moreover, are completely dependent on the whims of investors.

One way or another, but ahead of all the states that occupy key positions in world energy markets are extremely difficult times. Each country has its own realities and its “starting conditions” before this, I would very much hope that the last test of strength. To whom and how to manage to get through it, we will know soon enough.
Reporterin Yandex News
Reporterin Yandex Zen
30 comments
Information
Dear reader, to leave comments on the publication, you must sign in.