Proclamation of Haftar as head of Libya plays into Russia's hands 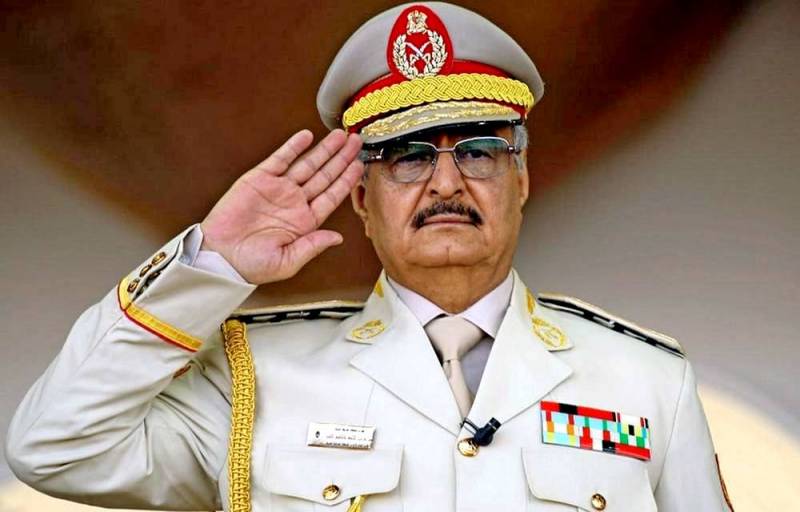 Curious news came from Libya. Having never managed to take the capital of Tripoli by military force in a year, Field Marshal Khalifa Haftar decided to make this a cunning. The commander of the LNA simply proclaimed himself the head of state on the basis of a “people's mandate” and rejected the Shirat agreements, on the basis of which the opposing Government of National Accord was formed.


What is this, a gesture of despair or a thought-out plan of Haftar and the coalition of external players standing behind him?

Recall that Libya is in a state of permanent chaos after the NATO aggression in 2011, which led to the reprisal of its leader Muammar Gaddafi and destroyed the country, turning it into a conglomerate of “policies” and tribal unions that are constantly at war with each other. In the east, the elected Parliament, to which the HNA of Haftar is subordinate, has real power. In the west, Tripoli is sitting in Tripoli Faiz Sarraj, created on the basis of an agreement signed in 2015 in the city of Sihrat. In addition to the mandate officially recognized by the UN, this government does not possess actual power over Libya, but it has the right to sign international treaties, which some external players use.

The situation is complicated by the fact that both sides of the conflict are supported by entire coalitions of foreign states. It is believed that France, Egypt, the United Arab Emirates, Saudi Arabia stand behind Haftar. Beyond Sarraj is Italy, Great Britain, Qatar and Turkey. Russia has a dual position. On the one hand, Moscow recognizes the PNS, on the other hand, mercenaries of Russian origin are marked on the side of the field marshal.

Despite an active start in the spring of last year, the LNA could not take Tripoli. The offensive is completely stuck in a positional struggle. Since the beginning of 2020, the case has complicated the active intervention of Turkey. Ankara signed a memorandum of military cooperation with the PNS, starting to transfer its military, Syrian militants, as well as increasing the supply of weapons, in particular, UAVs. This further worsened the position of the field marshal.

But a much greater concern to other parties to the conflict was caused by the memorandum on the delimitation of sea zones, which President Erdogan quickly signed with Sarraj in exchange for military assistance:

A memorandum of understanding was signed between Turkey and Libya on the demarcation of maritime zones in the Eastern Mediterranean. The memorandum has been ratified by parliament, approved by me and now sent to the UN.
A smart and fast Turkish leader intends to gain legal access to the Libyan oil and gas shelf, at the same time putting obstacles for the implementation of energy projects to his competitors. It is known that the Eastern Mediterranean is now a tangle in which interests in the development and transportation of hydrocarbons by many countries are intertwined.

It is not surprising that the activity of President Erdogan instantly turned Italy, the UAE, Egypt, Greece, Cyprus and Malta against him. Now, many people want to get rid of the Turkish presence in Libya despite the fact that Ankara intends to gain a foothold in its former province by building military bases at key points. Some time ago we toldhow, according to available information, the UAE was ready to pay Damascus several billion dollars for the Syrian army to resume the offensive in Idlib, drawing all the attention of Turkey to the north of the SAR.

Present political Haftar’s move with denunciation of the Sychrat Accords fits into that pattern. If they are invalid, then the Government created on their basis does not have a mandate, which means that the agreements signed by him with Ankara are illegal. Logic could be something like this. The international community’s response to Haftar’s statement is mixed. On the one hand, this unilateral step has been condemned by both the EU and Moscow. The head of European diplomacy Peter Stano said:

We call on all actors, all who have influence on these parties, to increase pressure so that they stop hostilities and begin to search for a political solution. This is necessary for the country and its population.
On the other hand, we are talking about some kind of political solution, but what can it be in practice? New agreement and elections, probably so? This is what Khalifa Haftar himself said:

Libyans, you have responded to our call to announce the termination of the political agreement that destroyed the country, as well as the call to authorize the one you consider most worthy to rule at this stage.
LNA today controls 75% of the country. Haftar, or rather, his protege, a kind of compromise figure, can get a real “mandate of the Libyan people” as a result of a plebiscite, and then send memorials signed by the PNS with Ankara to the furnace and officially put Turkey out the door, which will be very beneficial for Moscow . It is possible that such a scenario, or its variations, may become an international consensus. It would be a legally competent way to pull a burning wick out of a powder keg, into which the Eastern Mediterranean is increasingly turning with the Turkish expansion.

Turkish pro-government newspaper Daily Sabah wrote that the victory of Haftar in Libya will undermine the dominance of Americans and Europeans in the region, and China and Russia will take their place.

Well, time will tell.
Ctrl Enter
Noticed oshЫbku Highlight text and press. Ctrl + Enter
We are
Who is behind the field trip of Field Marshal Haftar to Tripoli?
Ten "defeats" of Putin
Reporterin Yandex News
Read Reporterin Google News
7 comments
Information
Dear reader, to leave comments on the publication, you must sign in.