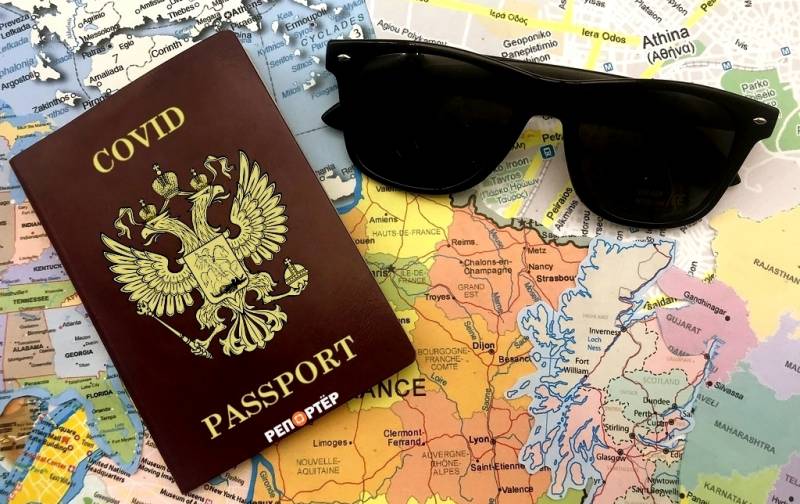 For many European countries, tourism is one of the most important sources of maintenance. economics. States are striving to restore this industry as soon as possible, despite all the threats posed by the coronavirus pandemic. The desire, in principle, is good, only for its implementation it is proposed to use some tools that can subsequently come out sideways not only for Europeans themselves, but for all of humanity.


The introduction of the so-called "COVID passports", which is now being called for far from only in the EU, is fraught with a number of negative consequences both in the short and long term.

Divide into “clean” and “unclean”

As far as we know, the initiative to introduce a new type of document in the European Union, the availability of which will become mandatory for all who travel within it, regardless of what type of transport is used to move between states, was made by Gary Capelli, Minister of Tourism of Croatia, The current moment in this organization is presiding. The idea expressed during the virtual conference of the heads of the relevant departments of the EU states was immediately warmly supported by the representatives of the Czech Republic, which is one of those countries that have to deal with without “dear guests”. The proposal did not cause any particular objection among the other participants in the meeting. Still - at least 10% of the Old World GDP depends on tourist flows, the industry provides up to 12% of its employees with employment. According to Mr. Capelli, this should be “a single document for the entire European Union, checked both by the departure of a person from a permanent place of residence and when crossing the border of a new host country”. Most likely, in this case we can talk about the so-called “passport of immunity to coronavirus”, about the possibility and necessity of which there is a heated debate almost all over the world. What is this, in essence, such? Proponents suggest considering a positive analysis for the presence of antibodies to COVID-19 in a person’s blood as a basis for obtaining such an identity card that has no analogues in the history of mankind. Allegedly, those who possess them can no longer infect themselves or become a source of danger of infection for others. It’s a kind of newly-found caste of “pure” members of human society for whom any roads automatically open up in life - first of all, work in those areas that involve communication with a large number of people. The same tourism business, restaurant business, transportation and the like can become a “closed zone” for “couples” who do not have “COVID passports”. And also - medicine, teaching and much more.

At the same time, many doctors, and, above all, professional virologists, consider this approach, to put it mildly, extremely doubtful. The analysis mentioned above, generally speaking, is not something new and previously unknown. It is performed on the basis of an enzyme-linked immunosorbent assay (the so-called ELISA tests), which detects antibodies to the virus in blood plasma. A similar technique has long been used, for example, in assessing the need for re-vaccination against the same measles. By the way, it also underlies the rapid tests for coronavirus, which check whether there are antibodies to it in the human blood. However, if in this case the goal is to identify the patient, then in order to receive an “immunity passport” the blood of a healthy person must show the presence of antibodies. According to the firm conviction of the adherents of this idea, he already has absolute protection against the virus. Consequently, he can be exempted from any restrictions regarding "social distance" - to travel wherever he wants, not to observe the mask regime, to participate in mass events, and so on. It should be noted that the number of those who firmly believe in this theory is constantly growing, and they are very active in its practical implementation. In Chile, "immunity passports" are already being issued with might and main - upon discharge from patients who have been ill. In Germany, citizens are encouraged to independently and at home test for antibodies (the corresponding kits in large quantities are planned to be sent to homes), and in the Lambardia pandemic that suffered the most severe blow, mass tests for the presence of immunity have already begun - with the issuance, again, of relevant certificates, which over time may well turn into passports. The British hastened to create even a special CoronaPass application that stores relevant data about a person obtained by reading the corresponding QR code. This is still an initiative of Bizagi, but there is evidence that the government is very interested in it.

Most likely, Gary Capelli had in mind a document of just such a plan. And all would be fine, only from the very place where it comes to immunity to a disease that plagues humanity, extremely unstable moments begin, regarding which there are so many more questions than answers. First of all, purely technical issues remain completely unclear to this day. Where is the guarantee that a positive test testifies precisely to the protection of the COVID-19 organism, and not from any other of the representatives of a rather considerable “family” of coronaviruses? She is not there. So far, no one has managed to achieve such purity and accuracy of the study. Moreover, according to available information, in the same UK every third test for antibodies gave a generally incorrect result! It turned out to be even more interesting with studies conducted at Shanghai Fudan University. There, the subject of the study was the blood of about two hundred patients successfully treated for coronavirus. For the vast majority, everything went according to what was written - 10-15 days after infection, their body developed the expected amount of antibodies. However, in a third of the survivors their level was extremely low, and in 10 patients there were no antibodies in the blood at all! From the word “absolutely” ... And at the same time - not the slightest symptoms of COVID-19 or any other health disorder! To the amazed question: “How can this even be ?!” highly-trained medicus of the Celestial Empire spread their hands and answered something like "but the devil knows him." Well, or what is the closest idiom in Chinese meaning ... With repeated infections - the same story is about. Their isolated cases are allegedly recorded in the same China, Japan, and in South Korea they speak of almost a hundred such incidents. Nevertheless, to this day, virologists cannot come to a consensus: did the disease cure the new ones, or simply return to them, treacherously lurking for a while? Sheer obscurity.

However, this is not even the most important thing, but the fact that not a single scientist or practicing physician today can give an unambiguous answer to the main question: how long does the immunity to COVID-19 work? It is necessary to be vaccinated against "ordinary" flu annually, from the same tetanus - once a decade, there are ailments, from which a single vaccination is quite enough. Until this riddle is clarified, there is a huge danger that one day COVID passports will turn into not just empty papers, but into passes for infected people, giving them the opportunity, even if not involuntarily, to infect other people. This is precisely what is feared today at the World Health Organization, whose experts strongly oppose any “immune indulgences”, at least until answers to at least the main, cardinally important questions regarding the nature and properties of COVID-19 are received. On this occasion, WHO even issued a special statement in which it emphasized that at the moment "there is no evidence that conclusively confirms that people who have had COVID-19 are protected from reinfection, are absent." This position, in particular, was confirmed by Michael Ryan, Executive Director of the WHO Health Emergencies Program. According to experts of the organization, playing such a “coronavirus roulette”, humanity risks a second wave of a pandemic, which may be even worse than the first. Moreover, scientists are convinced that at least three different strains of this virus are circulating in the world - and whether immunity to one of them protects against all others is all the more unknown. Nevertheless, many states today are more and more confidently starting to move precisely in this, extremely ill-conceived direction.

All of the above covers, mainly, the purely medical side of the problem. However, according to some experts, it is much broader and has many other aspects - from moral and ethical to social and criminological. Let me start with the last one. How many different documents exist in the history of mankind, the same number of their fakes. There is no doubt that the widespread (and even more widespread) introduction of "COVID-passports" will immediately give rise to an entire industry for the manufacture and sale of fakes. And the point here is not even the emergence of a new, super-profitable business for criminal syndicates, but how many virus carriers will be in the midst of people using such pieces of paper, made for good money by criminal "craftsmen". This issue will become even more relevant if such documents once again divide all the inhabitants of the Earth into people of the “first” and “second” grade. If without them it will be impossible to get a normal job or go to a decent educational institution, become a civil servant, move freely and just lead a normal life. Over time, the lot of the "non-immune" may well become the dirtiest, hardest, low-paid work and life on reservations. Alas, it just so happened in human history that there will always be those who will be able to bring any idea, even initially seemingly good and humane, to such a terrible absolute that even the saints get out.

Discussions about the new “post-coronavirus” world generated by the pandemic have been more and more recently. No matter how much we would like the other, but its formation is already, in fact, an accomplished reality. It is difficult today to assume exactly what this world created by the misfortune that has befallen us all will be. However, with a great deal of certainty, it can be argued that he will not be more comfortable, nor freer, much less kind ...
Reporterin Yandex News
Reporterin Yandex Zen
6 comments
Information
Dear reader, to leave comments on the publication, you must sign in.