Against coronavirus and Russia: Lukashenko loses his “last fight” 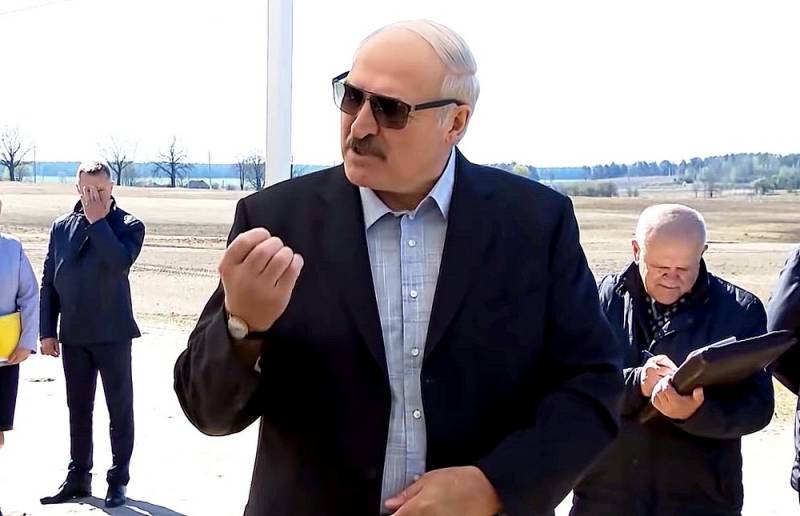 On the anniversary of the Chernobyl tragedy, Alexander Lukashenko made another statement to media representatives, which once again categorically denied the need for any quarantine restrictions in Belarus in connection with the COVID-19 pandemic. The indomitable resistance of the “father” would be explainable and appropriate - if only the situation in the country had not developed according to a scenario close to the definition of “catastrophic”.


One gets the impression that Alexander Grigoryevich, accustomed to the fact that he can solve any internal and most external problems by his willful solution, this time chose an opponent beyond his strength. Coronavirus categorically does not want to obey its directives and instructions. However, by and large, the point here is not only a disease. And what else? Let's try to figure it out.

They would take the epidemic - and cancel ...

Generally speaking, the situation with the “fight” against infection, which at the moment has already destroyed more than 3 million inhabitants of the Earth and taken away hundreds of thousands of human lives, turned out to be not just paradoxical in Belarus, but contrary to all the practical forecasts made in this regard. Lukashenko had at his disposal the strongest vertical of state power, powerful intelligence services, an almost “Soviet” health care system, and most importantly, an incredibly disciplined people, not only law-abiding, but rather even law-fearing! Add to this a fairly compact country, the absence of hordes, dragging migrant migrants to their homeland, bringing a sea of ​​problems to neighboring Ukraine, the opportunity to receive help from the same China and Russia ... Yes, Belarus had every chance to repeat the “Vietnamese phenomenon” being discussed by everyone in the world - in the state , having a common border with the Middle Kingdom, not a single person died from COVID-19. Only 268 residents of the country were infected, and as of April 23, not a single new case of infection was recorded, which allowed the authorities to cancel the nationwide quarantine. However, before that he acted - and extremely tough. I recall: many people with whom I spoke even at the very beginning of the spread of the pandemic around the world made roughly the following forecasts: “Well, in Belarus everything will definitely cost! There, the “dad” will quickly drive everyone into quarantine, block the borders, and indeed - he will fix everything in the best way. You will not spoil him! At least he will overcome the coronavirus, at least some other misfortune. ” In truth, I myself expected something like that. But certainly not the fact that the almighty practically the head of state “surrenders” it without a fight to the approaching wave of the coronavirus, without even trying to take advantage of its own enormous opportunities and powers in the name of the uniquely good work of saving compatriots.

Nevertheless, instead of clear and coordinated actions, which, perhaps, should have begun with the creation of an operational headquarters to deal with the emergency (in Vietnam, this was done almost on the day China announced the emergence of a new disease), Alexander Grigoryevich took the position, the least strange one - he began to completely deny the very existence of a deadly disease, and then its danger, calling the worldwide effort to combat COVID-19, "psychosis." And what are Lukashenko’s statements about the fact that “no one died from the coronavirus”? In fact, this is about the same as to question a bullet wound in the heart, as the cause of death on the grounds that it does not cause lead poisoning ... And the advice from the "father" on the prevention of coronavirus has long been disassembled into quotes and turned into Internet memes with the widest circulation. Either “the tractor will cure everyone”, then “poison the infection” with vodka, then contemplate the kids - one “recipe” is more bizarre than the other. At the same time, the Belarusian leader has recently begun to get confused - at first, hockey was the best remedy for COVID-19 because “refrigerator, sports and ice are the best medicine”, however, after that he started sending fellow citizens to the bathhouse, since the Chinese comrades enlightened him that at +60 the infection dies guaranteed. Lukashenko perceives any attempts to criticize his own, to put it mildly, inadequate actions and statements (it’s one thing when a person broadcasts such “revelations” on the air and is completely different if they sound from the lips of the president of the country), not with obvious hysterical notes. Everything, it turns out, is “trying to bite him” because “Belarus has not joined the ranks and is going its own way,” with the possible exception of “the most lazy and lousy dogs not yapping from the fence” to the wise and shrewd “dad” ". All this would be funny, if it were not so sad ...

If victory, then Pyrrhic

Such things could be attributed to eccentricity and treated them condescendingly if the lives of people were not at the cost of the matter. Specialists of the World Health Organization have repeatedly called on Minsk to introduce “at least minimal measures of physical distance” in order to prevent a very widespread infection. On April 21, its experts once again stated that "the outbreak of COVID-19 in the country is growing rapidly and the authorities urgently need to take action." Alexander Grigoryevich, as a true hockey player, “put all these recommendations and calls on the side”, stating that “WHO has no complaints against Belarusians”. On Easter, he severely criticized those who “blocked the way to the temple”, went to church himself, setting an example for the country, later insisted on the organization of a republican subbotnik, and on May 9 he was going to hold a parade, which even in Russia refused with a heavy heart. However, all this pales before the presidential decision to resume education in schools and higher educational institutions, and without the slightest precaution. Lukashenko deigned to call the students wearing masks “utter stupidity” and promised to “call to account” those who try to introduce him. This already, my sovereigns, smacks of insanity ... I repeat - the attempts of the "father" with his own will to "take and cancel" the global pandemic in a single country would be worthy of loud applause, turning into a standing ovation ... if they were successful! In fact, everything is categorically different. At the time of this writing, the number of confirmed cases of COVID-19 in Belarus has exceeded 11 million. It would seem that not so much? Let's not rush. Firstly, this number is almost double the same huge Australia. Secondly, in terms of the population (9.5 million), little Belarus overtake for every one million it overtook the same Russia, not to mention other countries. But the worst is the other - in the growth rate of the number of cases. Over the past week it has doubled! The daily increase is approaching a thousand people and does not show the slightest tendency to decrease. No quarantine needed ?!

The most unpleasant thing is that literally all the time since the beginning of the pandemic, Lukashenko has not stopped making increasingly aggressive attacks on Russia. What he just did not blame our country! The “closure of borders”, “refusal to sell buckwheat”, constant “unjust” criticism - “Russian media out of Belarusians make fools”. Domestic tests for coronavirus are “inaccurate and substandard” - Minsk refuses to use them, and so on. Moreover, Alexander Grigorievich does not tire of tirelessly blaming the measures that Moscow is taking to fight the infection - how to listen to it, “Russia is burning with the coronavirus,” Moscow simply “choked” in it, in our country “they tried to lock everyone in musty apartments” and of this, of course, "nothing came of it." The solution to all these demarches is extremely simple - the beginning of the pandemic almost coincided with the next, extremely difficult phase of the "oil war" between Minsk and Moscow, during which the "father" stood behind his long-standing benefits and tried to "squeeze out" new ones from the Kremlin concessions, in parallel, in fact, finally torpedoing the creation of the Union State. And now, it would seem - victory fell into his hands by itself. Oil prices "collapsed" to unprecedented limits, but ... The victory turned out to be "pyrrhic" - that is, it was completely similar to the most crushing defeat. Rejoiced at the flows of almost gratuitous oil, Belarus began to buy it wherever possible (besides Russia). There was talk again about deliveries from the United States, about a “Polish reverse through Friendship”. As of April 26, according to the information of the country's first deputy prime minister Dmitry Krutoy, the local refineries are almost 100% loaded. The only question is: where will they put all the products of the processing of "black gold"? The volume of supplies of Belarusian oil products for export in the first two months of this year decreased by 62,4% compared with January-February last year. The number of their sales outside the CIS countries fell especially strongly (by 75%). There, unlike Belarus, quarantine.

Lukashenko’s problem is that economy the country is more than perceptibly going to the bottom. The price of crude oil can be arbitrarily low, but how can a state, whose budget was built on dumping the gasoline market, survive if no one needs the fuel yet? No wonder, when answering the question about measures to support the business affected by the pandemic, the "dad" broke loose and openly stated that "no one will give anything to anyone", since "there is nowhere to take", and indeed he does not intend to "take from those , who strained and give to those who were messing around. " This is to the question of why Minsk does not dare to introduce quarantine in any way. Alyaksandr Grigorievich himself said in one of his interviews that in this case the Belarusians would “lift him up a pitchfork”. Well, the pitchfork is not the pitchfork, but there will definitely be problems in the rapidly approaching presidential elections. Especially when you consider that Lukashenka himself, trying to rebel against Russia, has recently provided the country with the most favorable regime for the activities of both the local "opposition" and its overseas curators. Realizing perfectly well that he had lost the next "epic battle for oil with the Kremlin", the head of state decided to make an extremely risky bet in his game, in fact to go for broke, showing his people that only he is able to overcome not only his own political opponents, but even a deadly epidemic. But, apparently, this rate turned out to be a bit.

One of the most memorable “pearls” of Alexander Grigoryevich regarding the coronavirus was his statement that this mankind “the Lord put on the head” for “destruction of forests” and his other activities to the detriment of the environment. Straight Greta Tunberg, only with a mustache and bald head. However, the farther, the more the feeling is born that the Belarusian leader, too ... flew from somewhere, and moreover. A politician and statesman with his colossal experience should have understood that a deadly virus is not an opposition rally that can be dispersed or banned by a presidential decree. The feeling of our own infallibility and omnipotence played a very cruel joke with Lukashenko. However, the concern in this case is not so much his political future, as the fact that many wonderful people - the inhabitants of Belarus fraternal to us - were held hostage by the ambitions of the "father".
Ctrl Enter
Noticed oshЫbku Highlight text and press. Ctrl + Enter
We are
Ukraine from the inside: traitors, curators and those who watch from the Kremlin
Ten "defeats" of Putin
Reporterin Yandex News
Read Reporterin Google News
25 comments
Information
Dear reader, to leave comments on the publication, you must sign in.