"Full restart": the US economy will not be destroyed by the coronavirus, but by the US Federal Reserve 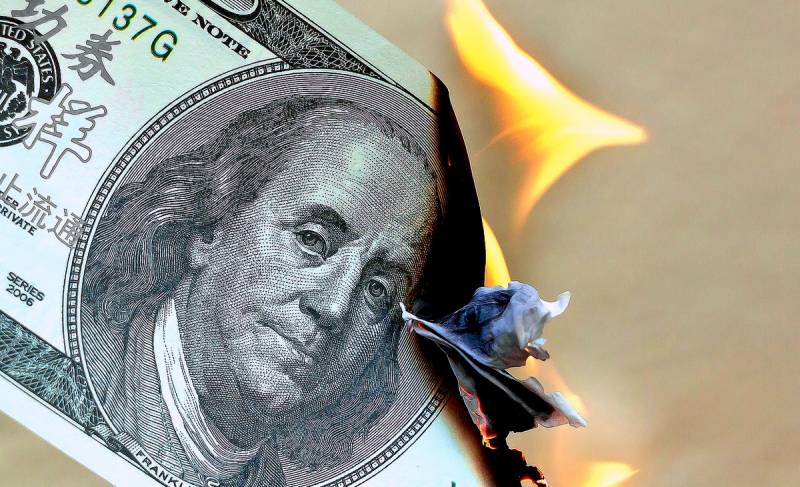 On the eve of White House spokeswoman Kaylee McEnani in an interview with Fox News, a statement was made regarding the readiness of the US government to “completely restart the national economic systems. " These words indicate that, after weighing all the threats and risks from the ongoing COVID-19 epidemic and the negative effects of quarantine on the economy, in Washington, as usual, they chose to save the latter. Nothing personal just business…


However, something else was said in the speech of Mrs. McEnani. Namely, an indication of the intentions of the American authorities "to restore all lost positions as quickly as possible" in order to "restore the US leadership on the planet again." In principle, it is quite understandable and logical desire (if we talk about the economy, it’s clear), but Washington is determined to achieve its fulfillment at the expense of the rest of the world.

Contrary to the firm conviction of some of our fellow citizens (based, however, not on accurate knowledge, but on faith, their fanaticism that can shame the most inveterate sectarians) that "America is always the coolest - it was, is and will be," things are overseas now go very badly. The frankly "slammed" beginning of the mass spread of coronavirus in the United States, uncoordinated, contradictory, and sometimes openly ridiculous actions of the authorities to deploy the fight against this disease, ultimately led the country to the need to introduce the most stringent quarantine measures and restrictions. The result is more than deplorable. According to the US Federal Reserve System, the country's industrial production in March fell by 5,4% compared with the previous month, which is an “anti-record” in terms of decline since the beginning of 1946. At the same time, in the component of two-thirds of all industrial production in the United States of the processing industry, the decline was even greater - by 6.3%. Capacity utilization in the country decreased to 72.7%. The volume of retail trade decreased by 8.7% - the figure seems not to be scary, but this, again, is the maximum “minus” from the moment when such statistics were generally started (1992). What exactly is behind fairly general indicators can be examined in more detail using the example of one of the “flagship” branches of American industry - metallurgy. According to data released by the American Iron and Steel Institute (AISI), the utilization of steel facilities in the country is currently at 56%. Even “whales” such as US Steel and ArcelorMittal are forced to close factories and fire employees, there is nothing to say about smaller ones. Moreover, it is not only a matter of following quarantine prohibitions and unwillingness to turn their enterprises into nurseries of COVID-19.

Everything is much worse - there is simply no demand for metallurgical products. Last month, US Steel was forced to close pipe plants in Ohio and Texas, cutting pipe production by 60%. The fall in oil prices and the collapse of its production in the US “killed” the need for components for drilling. The same story with the auto industry - every month its downtime costs metallurgists one billion dollars. And this is not to mention the fact that their product prices fell to record lows - not like oil, of course, but for hot-rolled steel and a decrease of 18% is already a huge problem. However, suffer, of course, not only and not so much the owners of corporations and large enterprises, as the very ordinary Americans whom Donald Trump promised in every possible way to groom and cherish. According to the estimates of the American political scientist Leon Weinstein, a pandemic will ultimately result in the ruin of at least a million small businesses for the United States, which will inevitably lead to a “catastrophic unemployment rate”. In fact, this is already happening. By the number of those who ended up on the street without any means of livelihood, the United States came close to the worst times of the ever-memorable Great Depression and there is every reason to believe that this time they will surpass them. Over the past week, for which official data are available today (until April 18), 4.4 million Americans took unemployment benefits. Since the outbreak of the disease, which entailed restrictions and quarantine, the total number of its applicants was 26 million. It should be remembered that by mid-March in the United States there were already more than 7 million officially registered unemployed - so to speak, “pre-coronavirus”. Using the simplest addition method, we get the figure of more than 33 million or more than 20.6% of the total working population of the United States. The last time such terrifying numbers were recorded in the country in 1934. However, according to American economists, these disappointing indicators will grow, moreover, they do not take into account hidden and partial unemployment. According to gloomy forecasts of local labor market experts, the United States has every chance of exceeding its maximum level of decline, when in 1933 a quarter of all Americans were unable to work.

A medicine that is worse than the disease

After that, the reasons for the mass protests of citizens of the United States against quarantine, which in some places are already turning into street riots, become quite understandable. When the alternative to death from infection is starvation, or at least a miserable existence, most people do not see much choice for themselves. Now much is said about the various "wonderful" measures that Washington is taking to "help citizens" and "save the economy." Some people in Russia are proposing and even trying to demand that the government go the same way. Let's not rush into raptures, but rather try to consider these “rescue” programs more thoughtfully and, if possible, impartially. It must be admitted that most of them are massive and not very well thought-out “throwing in the masses”, as well as in some sectors of the national economy, of enormous sums of money. In this case, this process sometimes quite peculiarly occurs. For example, the US Treasury Department acknowledged that it was necessary to delay sending $ 70 worth of state aid to recipients (including 1200 million Americans), since Donald Trump demanded that he print it on every such “present” name! The tax service called this decision “unprecedented,” but disciplinedly “took it under the hood” - the president nevertheless. You can understand the head of the White House - the elections are almost there, but here is a case for agitation! However, all this makes us wonder - how much common sense and economic calculation are in the "anti-crisis" actions of the US administration, and how much is the most common PR? If you want to know, some local experts tore to smithereens the "distribution of money" begun by the state. In their opinion, it will lead to the fact that, for example, small entrepreneurs, instead of painful, but necessary optimization of their own activities, will wait for new handouts. But the White House will not be able to feed them forever!

However, a much greater threat (and, first of all, not for the United States themselves, but just for the rest of the world) is the unprecedented dollar issue undertaken by the US Federal Reserve. This issue needs to be dealt with as much as possible. In addition to reducing the interest rate to full zero, the Fed began to inject huge sums into the country's economy through the purchase of various securities. The trouble is that, firstly, instead of the originally planned 70 billion for these purposes, 2.3 trillion (!) Dollars will be used, and secondly, that such operations will be carried out, in fact, indiscriminately. In addition to the usual bonds of its own Ministry of Finance, or, at worst, mortgage-backed securities, the Fed intends to "clean up" debt obligations of the states, the corporate sector and other securities, which financiers traditionally classify as "junk", problematic, without real value. Thus, according to the Fed representatives, it is planned to “provide support for the flow of loans to households and enterprises.” This is not to say that the United States, for the first time in history, has resorted to this kind of risky and dubious manipulation - in exactly the same way, with the help of "quantitative easing" or Quantitative easing (QE) operations, they have already pumped liquidity into their own market after the 2008 crisis. Then, three QE stages were carried out for an amount approximately equivalent to the current one. The only thing is that last time all this was done over four years - and now the crazy money supply has been pouring into the American economy in just six weeks. And, apparently, this is far from the end of the story. As already estimated by economists, such an "attraction of unprecedented generosity" should bring to every American in one form or another (not necessarily cash) an amount of about 7 thousand dollars. At first glance, this will help “keep afloat” the purchasing power of the population to revitalize production and business and not even “push” inflation too much. But here it is not so simple as it seems ...

The fact that the maximum "attachment" to the US dollar of the global economy, for which it is a universal means of payment and reserve currency, sooner or later will come sideways to all of humanity, has been said and written many times. At the same time, few even listened to economists, even very venerable ones who spoke with such warnings. And finally, the moment came when the United States "turned on the printing press" at full capacity and even, it seems, over it. The world is about to be swept by a new "green" wave of unsecured reality papers with presidential portraits. Recall - the US budget deficit this year will exceed $ 4 trillion. This is twice the performance of any period since 1945. Again, these are the calculations and forecasts that correspond to the current moment, when Trump insists that the peak of the epidemic is "about to be passed" and it is time to "discover America in a new way." Do you think there are no pessimistic scenarios in this regard? Though more than enough ... Many doctors and scientists are very afraid that premature removal of quarantine restrictions may lead to a new outbreak of the incidence of coronavirus, worse than before. But economists echo them, claiming that a repeated forced “lockout” will cause the country even more terrible damage and the price of an error will be calculated here not in billions, but in trillions of losses.

In the best, most favorable case for the United States, the whole world is invited to participate in their salvation, meekly absorbing the enormous money supply that is now being produced "from the air." However, there is the worst option ... By no means claiming that the United States will inevitably turn into a bankrupt state as a result of a pandemic, I note that in their entire history they have probably never come so close to this line. What does the world expect, if, in addition to the “coronavirus crisis” that has already gripped it, the foreign exchange reserves of many countries, as well as the assets of millions of companies and the accumulation of billions of people, will suddenly turn into piles of cut paper, one does not even want to imagine.
Reporterin Yandex News
Reporterin Yandex Zen
5 comments
Information
Dear reader, to leave comments on the publication, you must sign in.