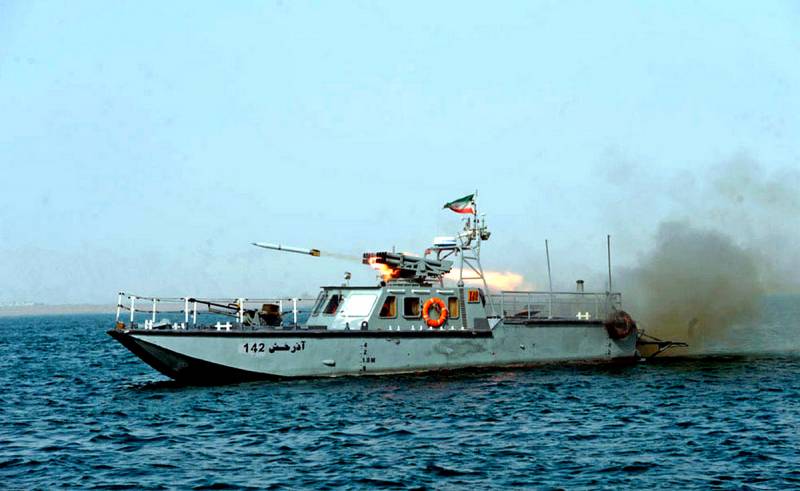 The Middle East is again troubled. The US-Iranian passions, caused by the assassination of the IRG General Kassem Suleimani, had hardly had time to subside, when the parties exchanged bellicose statements. Washington and Tehran have publicly promised to stoke each other's ships.


What is this, another step towards a military conflict, or is it a "PR" during the "plague"?

The head of the White House traditionally announced his decision via Twitter:

I instructed the U.S. Navy to open fire and destroy all Iranian military boats, creating obstacles at sea for American ships.

Apparently, we are talking about the maneuvers that the ships of the Iranian "mosquito fleet" made several days ago around American warships. 11 boats maneuvered dangerously around the Fifth Fleet of the US Navy in the Persian Gulf region, without responding to radio signals. An hour later they called back and left. The parties interpret the incident differently, blaming the opposite for provocative actions.

I ordered our Navy to destroy any American terrorist forces in the Persian Gulf that threaten the security of Iran’s military or non-military ships.

It sounds quite formidable, however, Iran’s “mosquito fleet” is hardly capable of sending the Fifth Fleet of the US Navy to the bottom due to the large difference in weight categories. Tehran has several corvettes and frigates, high-speed missile boats, mini-submarines of its own production and three projects 877EKM “Halibut” (“Varshavyanka”) of Russian production. In a certain situation and the proper level of professionalism of the crews, their torpedoes and missiles can cause considerable damage.

But nevertheless, the main purpose of the "mosquito fleet" is "anti-tank", the fight against the enemy in his communications. If anything he can send to the bottom of the AUG of the US Navy, then these are ballistic missiles, which Iran is actively developing. Last summer, the IRGC commander announced that Tehran could now hit aircraft carriers at sea. However, their use will mean the beginning of a full-scale war between the Islamic Republic and the United States with its allies.

So why do Americans and Iranians openly provoke and provoke each other in such a difficult time?

In fact, neither the United States nor Iran needs a full-scale war, but a small mess is paradoxically beneficial to both sides. Both Washington and Tehran are experiencing serious problems with the economycaused by the coronavirus pandemic. The latter’s affairs are much worse due to the Western sanctions regime on oil exports. A small “war” can shake the population, forgetting about pressing problems, and rally around the government against an external enemy, albeit for a while. The Americans will sink the Iranian boat, the Iranians will shoot back, the entire world press will switch to this topic from the coronavirus.

A nice bonus from President Trump for his tweet for the American shale is some leap in oil prices caused by the risk of conflict in the Middle East. It seems that the war in one form or another is becoming an increasingly profitable solution for all parties concerned to raise the price of black gold and cope with economic difficulties. The only question is who will beat whom and where.
Ctrl Enter
Noticed oshЫbku Highlight text and press. Ctrl + Enter
We are
Ukraine from the inside: traitors, curators and those who watch from the Kremlin
Ten "defeats" of Putin
Reporterin Yandex News
Read Reporterin Google News
Ad
The publication is looking for authors in the news and analytical departments. Requirements for applicants: literacy, responsibility, efficiency, inexhaustible creative energy, experience in copywriting or journalism, the ability to quickly analyze text and check facts, write concisely and interestingly on political and economic topics. The work is paid. Contact: [email protected]
9 comments
Information
Dear reader, to leave comments on the publication, you must to register.
I have an account? Sign in