Will the pandemic make China and Russia real allies? 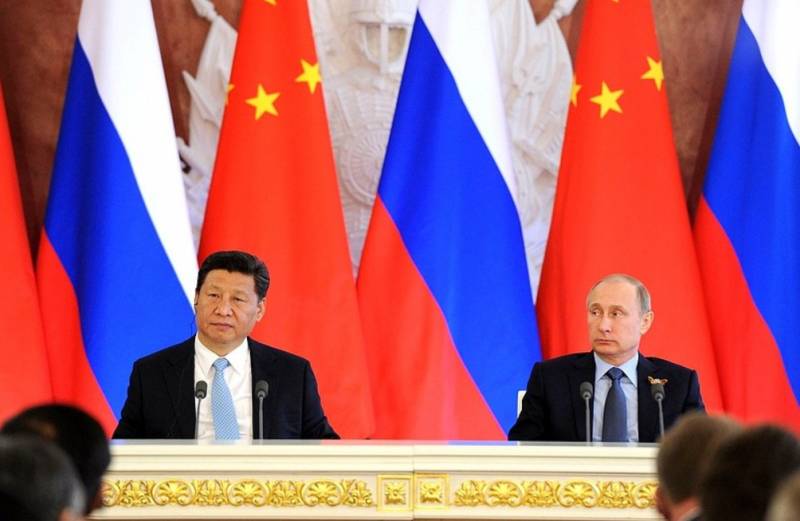 Recent reports from Washington confirm the worst fears about US intentions, using the global COVID-19 epidemic as an excuse to sharply aggravate an already extremely difficult relationship with China. This, in fact, is about starting a new war. Trading - at least.


However, Russia's interest in this case lies precisely in the fact that such a turn of events could force the Celestial Empire to finally and seriously decide on the choice of further allies and partners, both tactically and strategically. Is it possible in this case, a sharp rapprochement between Beijing and Moscow, under what conditions can it take place, and what prospects does it promise? Let's try to figure it out.

And he really knows how ...

Speaking to reporters in the White House, his head stunned the audience news that he is seriously considering the possibility of a complete break with such difficulty the “first phase” of the trade agreement concluded with China on January 15 this year. Like, if they don’t diligently and regularly buy everything that we intend to give them (first of all, energy), I’ll take it and tear it apart! And after that, "I will do what I know best" ... In the lips of Donald Trump, this seemingly abstract warning sounds truly ominous. Oh, that he is best able (and just loves!) To do, the current American president during his tenure has already shown the whole world. And continues to demonstrate. On the eve, for example, Trump ordered the US Navy to "open fire to defeat" on Iranian patrol boats - if they decide to "get" the brave guys under a star-striped flag. That’s what mankind is desperately lacking now, is the Third World War, into which any mess in the Persian Gulf will most likely outgrow ... As for China in particular, there is no doubt that the leader of the United States intends to continue the same thing about him policies sanctions, draconian duties, and all the other "charms" that together constitute what is called the "trade war" around the world. However, there are very strong suspicions that this time things will not be limited to the usual and far from gentlemanly set. Too high a degree anti-Chinese sentiments are now inflated - both in the United States itself and in the camp of its allies. In the heat of the most unceremonious and provocative rhetoric addressed to the Celestial Empire, as well as in the invention of ways, as it would be more painful to “injure” and “punish”, today everyone is competing - from US congressmen to American housewives. Lawsuits, various “investigations” and extremist appeals are not far from the declaration of war!

Especially zealous in this field is the top of Washington’s political establishment, beginning with the same Trump and Mike Pompeo, who produces anti-Chinese demarches, practically without stopping. On the eve, for example, he tried to report on the leadership of the PRC as boys, demanding from them "to immediately ensure the safety of all viral laboratories", which are "numerous" in the Middle Kingdom, according to the head of the State Department. The same Republican Senator Lindsey Graham, who, apparently, is slightly “moved” on anti-Russian restrictions, and certainly “hellish,” is rushing with another idea today - to arrange a “sanction hell” for China, because he, you see, “ is the state sponsor of global pandemics. ” This is similar to the proclamation of Iran as the "sponsor of world terrorism." The Senate leader also has one more remarkable “know-how”: simply refuse to pay Beijing that cosmic amount (at least a trillion dollars), which he has the full right to claim, being the largest holder of US government bonds. "Throw" these "damned commies" - and that's the end! Truly a purely American decision - as "elegant" as "legal". At the same time, openly anti-Chinese positions are beginning to take, in addition to the United States itself, and an increasing number of their most faithful allies from the "Anglo-Saxon world", and not only from it. British Foreign Minister Dominic Raab has already stated that there can be no talk of a "return to the old economic relations with China." Australian Prime Minister Scott Morrison criticized China and WHO "indulging" him, demanding an "independent investigation" is not clear what. Gerd Müller, Minister of Economic Cooperation and Development of Germany, joined the common chorus of “accusers” ... True, the cautious Merkel quickly shut her mouth, but clarified right away that “the issue is being studied.” In Sweden, all Confucius institutes and schools are closing down, all of a sudden recognized as "tools for brainwashing by the Chinese Communists." The lawsuits against Beijing “for the coronavirus” were discussed in Israel and Germany ...

What will choose in China?

However, and without coronavirus reasons to “roll out” the next claims of the Celestial Empire, its haters will have a whole heap. Take at least the same Hong Kong. Taking advantage of the situation, Beijing began to restore order there. In particular, they arrested one and a half dozen particularly violent "activists" accused of organizing riots that rocked Hong Kong last year for several months. The decision is most likely the right one, especially considering the fact that the unemployment rate in this region during the 1st quarter of 2020 has risen to the highest level in 9 years. It may even happen without instigators, and even if there are any ... The United States and Great Britain immediately rose in protest, reproaching China, as usual, for “infringement and oppression”, “violation of democracy and human rights”, as well as other egregious “sins” ". Beijing, in response, traditionally advised not to poke your nose out of business. Washington is also concerned about the increasing activity of the PLA in the South China Sea. While the American sailors pokolit wallowing in cockpits, turned into floating nurseries of coronavirus aircraft carriers, the Chinese comrades conduct exercises and even seem to drown someone. In the USA, they scream with might and main about "illegal territorial claims being implemented under the guise of a pandemic." All this is in support of the thesis that sanctions would be ready, and there would always be a reason. At the same time, one more important detail should be noted - an increasingly prominent place in xenophobic demarches, “conspiracy theories” and direct accusations made from the West is not even as conspiratorial as a purely political component. The Communist Party of China and its leadership, socialist ideology, the social system of the Celestial Empire, whose competition in the real crisis and critical situation the “collective West” lost not only shamefully, are declared the main “center of evil” and “the source of threat to the whole world”. as they say, with a crushing score.

Already today it is becoming quite clear that China will have a clear choice. In the first case, he will have to “obey” the United States and its allies, repent “kneel down” and admit his own non-existent guilt, not only taking the burden of moral responsibility for the worldwide tragedy of COVID-19 and the eternal stigma of the “source of the pandemic,” but and liability is quite material in the form of certain “compensations”. Then, quite possibly, the West will “graciously” descend to declaring the coronavirus “the result of the tragic mistake of the Chinese Communists and the imperfection of their state system”. In the second version, Beijing is accused of deliberately and maliciously “infecting humanity”, no matter how absurd and unproven it sounds. The choice, frankly, is not too attractive. With any development of the situation, the Celestial Empire is waiting for colossal economic costs in economic terms, and in political terms - a serious “loss of rights”. As well as the loss at the international level of all those authority and influence that China, sparing no effort, gained for decades. Where not to throw - everywhere a wedge. There is, however, a third probability. Its implementation is possible only if Beijing finally decides to break with the West as the main strategic partner, dare to cross out the half-century history of normalizing relations with the United States, dating back to the time of the presidency of Richard Nixon, and begin to defend its interests for real, without looking back at possible and even inevitable costs in this case. The risk, of course, is enormous - the mere loss of the American market (even if only temporary) will strike a blow cleaner than the coronavirus in the Chinese economy. However, firstly, as it was said above, the tremendous damage to the Celestial Empire cannot be avoided even with the most capitulating position, and, secondly, right now, speaking against the extremely weakened and fragmented pandemic of the “collective West”, China will to have chances of success that he did not have before. They are unlikely to appear if this “window of opportunity” is missed. At the same time, however, Beijing cannot do without reliable allies.

Already, representatives of upstream companies, whose complaints flow to the White House and prompted Donald Trump to yet another threat of a trade agreement, are pushing in their allegations that China, which was trying to buy more than $ 52 billion in US oil and LNG, instead of this "imports Russian and Saudi energy." But this would be the very right decision! It would be from such a move — a reorientation from American deliveries, at least of oil and gas — to Russian, that it would be worth starting. It’s time for the Chinese comrades to decide whether to support the US sanctions against Russian oilmen, risking to meet the next restrictions themselves, or once and for all to put an end to this humiliating and ruinous practice for all. Our country will be able to provide China with more than the same energy or agricultural products. It is only necessary to take an appropriate decision in Beijing, and in Moscow it will be supported, there is no doubt. Such a step can be saving for the economies of both countries - only Chinese comrades categorically should not try to observe their own profit, even if it’s happened more than once at the expense of a partner. To really “squeeze” the United States, to force them to sit at the negotiating table on completely equal terms, can only be done by delivering a tangible blow to the patient himself - the financial, dollar hegemony established by the Fed in the world. Will it be possible to do this if Beijing and Moscow join forces, and even connect smaller countries that are also not satisfied with the current geopolitical “alignment”? It is impossible to give an unambiguous forecast here, but there would definitely be a chance of success.

The above is by no means an attempt to “predict” or prescribe recipes to solve world problems. However, it is difficult to deny that right now the whole conjuncture of world events directly pushes Russia and China to such a decision.
Ctrl Enter
Noticed oshЫbku Highlight text and press. Ctrl + Enter
We are
Putin's phenomenon is Russia's main problem
Ten "defeats" of Putin
Reporterin Yandex News
Read Reporterin Google News
Ad
The publication is looking for authors in the news and analytical departments. Requirements for applicants: literacy, responsibility, efficiency, inexhaustible creative energy, experience in copywriting or journalism, the ability to quickly analyze text and check facts, write concisely and interestingly on political and economic topics. The work is paid. Contact: [email protected]
14 comments
Information
Dear reader, to leave comments on the publication, you must to register.
I have an account? Sign in