New Pearl Harbor: the approach of 30 Saudi tankers aroused alarm in the US 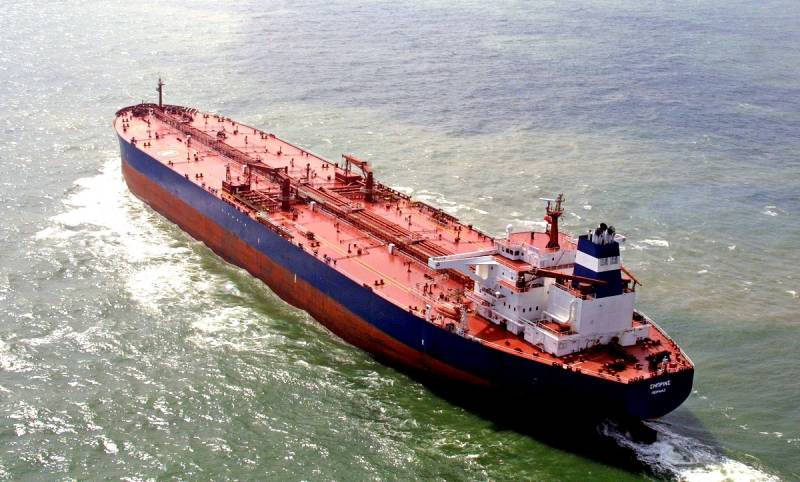 The world media is full of headlines: “An unprecedented drop in oil prices!”, “Black Gold” has experienced an unprecedented collapse! ”,“ We ​​are witnessing the end of an era of energy-exporting countries ”and the like. Well, and then, as usual, a friendly choir of professional "soothsayers" enters, enthusiastically displaying roulades about the "imminent end of Russia", the "collapse" and its "collapse" economics, financial system and all that.


Take your time, gentlemen! Put aside already prepared shovels, funeral wreaths and funeral candles. And at the same time - eat a lemon, so as not to radiate such joy from the "imminent defeat of Moscow." Let's better try without emotions to figure out what happened and what it can lead to.

Let's start with the main thing - in fact, no oil has “collapsed” anywhere. Here Mr. Peskov is absolutely right, perceiving "stunning" news with Olympic calmness and commenting on them with words that we have before us a “purely speculative moment”, which is related not to the energy sector, but exclusively to the sphere of exchange trading. That is, again - speculation, on which it, if you drop sentiment and call a spade a spade, is based. He is right in the fact that this moment is by no means an “apocalypse”. “Black gold” itself didn’t devalue and “go negative”, but only futures for it - that is, exchange-traded instruments tied to the real value of a particular energy resource, but in no case reflecting it 100%. And, very importantly, this concerns one type of oil - the American WTI, West Texas Intermediate. The May futures for her, as they say, “expired”, however, it was physically impossible to make deliveries at that particular moment. All storages are full, the resource is simply nowhere to go. Exchange players, who held these securities to the last in the hope of getting the best price for them, were the losers by outsmarting themselves. For this reason, WTI on Monday for the first time in US history fell to the New York Mercantile Exchange to negative indicators - quotes closed the trading session at minus $ 37,63 per barrel. The futures are exactly the same, but the June ones, “sank” in price much less, although they also fell in price quite Tuesday. The reason is simple - today no one can predict with what intensity the world economy will recover after the unprecedented shock caused by the coronavirus pandemic.

However, “Black Monday”, as it has already been christened on all world exchanges (following the fall in oil futures, the main indices immediately “sagged” on them: Dow Jones fell 2,44%, S&P 500 - 1,79% , and the Nasdaq Index - by 1,03%), it seems, made those who are able to prevent its recurrence in an even more catastrophic way to move. According to the data available at the time of this writing, OPEC was calling a teleconference of the relevant ministers of interested countries to discuss the critical situation in the market. The main issue discussed during these negotiations, quite expectedly, was the initiative to start the planned reduction in the production of "black gold" not from May 1, as it was envisaged at the conclusion of the last OPEC + deal, but immediately. Realities of life more than convincingly prove that it was actually necessary to do this not even yesterday, but much earlier. No specific decision on the results of the meeting has yet been voiced, but the fact that the soonest "turning the taps" by all exporters is an urgent need seems to be clear to everyone. However, no ... As far as we know, again at the moment, the Texas Railroad Commission, which among other issues regulates the activities of oil companies in the state, yesterday planned to discuss production quotas, did not succeed in this undertaking. In any case, according to its chairman Wayne Christian, "the final vote has been postponed until May." Are the US oil workers doing that great? It is worth dwelling on this issue separately.

"We are just filled with oil!"

The fact that the exchange price for the main grade of “black gold” mined in the United States on Monday reached negative values ​​and did not go very far from them today has been said above. At the same time, there is another, far more alarming danger for representatives of the already experiencing far from the best days of the American oil industry. It comes, if not paradoxically, from the "best friend" of the United States - Saudi Arabia. At least three dozen tankers, who have received about 40 million barrels of oil in their holds, are inexorably approaching the American shores. The Saudis literally fill the United States with their cheap energy sources, in April, in the first two weeks of the month alone, quadrupling the supply volume - up to 1.46 million barrels per day, compared with 366 thousand barrels in February! American oilmen have already called this unprecedented attack “the new Pearl Harbor,” and in the Senate, desperate calls are heard louder for Donald Trump “to prevent this armada from unloading on US soil.” Perhaps the president will have no choice but to heed these requirements, because otherwise the mining companies of the United States expect the most sad prospects. In any case, the head of the White House has already stated at a recent press conference that he is seriously considering the complete rejection of the export of hydrocarbons from Saudi Arabia. Let them swim where they want ... Will Washington take such a sharp step, which is likely to lead to a serious complication between him and his main ally in the Middle East? Most likely, they will try to avoid extreme measures, but the situation in the end may simply not leave another option.

In the meantime, the White House has found a “Solomon solution” - they want to fill almost all strategic storage facilities for the national energy reserve with almost free oil there. Thus, they promise to “add” 75 million barrels of “black gold”, using, for the first time in US history, “strategic capacities” by 100%. The solution is not bad, but, most likely, it can bring only a temporary effect - if only not to reduce production. For this today, not the first category "shale" advocates, in particular, companies such as Pioneer Natural Resources and Parsley Energy. Even though they are now ready to “subscribe” to a decrease in the volume of raw materials pumped from the bowels by all 20%, so as not to lose everything forever. Matt Gallagher, CEO of Parsley Energy, considers the market situation "abnormal" and is confident that "today everyone must act together - the companies themselves, state authorities and the federal government." Here are just the big "sharks" of shale mining so far strongly oppose any quotas. Apparently, they intend to use the current crisis in order to “clean” the industry from small competitors, remaining monopolists in it. According to American experts, from 10% to 20% of small and medium-sized mining companies go bankrupt and close. And the process, as they say, is already underway, and with might and main - according to the data of the American oilfield services company Baker Hughes, the number of operating drilling rigs in the United States alone last week decreased by 66 and amounted to 438, which is the lowest figure since October 2016. There is, however, a worse prognosis - according to industry experts released by CNN, with oil prices of 10 barrels per dollar or less, almost all US mining companies expect bankruptcy.

As you can see, the current situation is critically dangerous for all oil producing countries. The US runs the risk of ditching its own oil industry in the bud and again for many years to become a net importer of “black gold”. Saudi Arabia, if it does not calm down in its rage, may well remain with dozens of tankers filled to capacity, which will simply have nowhere to sail. Russia ... Well, it is perfectly clear that the situation that has developed in the markets does not bode well for us. However, even the greatest "friends" of our country, albeit with great regret, are forced to admit; there is no hope today of a repetition of the situation of the 80s of the last century, when “cheap oil ruined the Soviet Union”. Russia is not the USSR, economic realities, and indeed the global situation in the world are completely different. Sooner or later (and sooner rather than later) the world will rise from the coronavirus nightmare, aviation and automobile engines will start working, enterprises will start up and we will begin to return to normal life. Our country was experiencing and much more severe blows, this one will survive. It’s far from painless, but let’s take it into account when it’s all over ...

However, I would not want to end solely on a disturbing note. There were originals in the world who decided to turn problems in the energy markets to their own greatest benefit. And where would you think? In the "down" ... Yury Vitrenko, Executive Director of the NAK Naftogaz Ukrainy company there, came up with a truly "brilliant" idea - to cash in on overfilling of oil tanks all over the world. According to him, “the opportunity that has arisen in connection with the overabundance of hydrocarbons in the world cannot be missed; on the contrary, it must be monetized in your favor.” What, in fact, are we talking about? According to Vitrenko, “Ukraine has a huge oil transportation system where it is possible to store excess raw materials,” namely: “one operating refinery in Kremenchug with significant storage capacities, as well as many oil refineries that have been shut down for a long time, but at least there were such capacity "! By golly, the quote is given verbatim. Pan Vitrenko seems to be completely confident that all the countries of the world will immediately rush to hand over his own “black gold” to him with millions of barrels, and they will even dump a whole bunch of money for it. At the same time, he suggests storing energy at a long-abandoned oil refinery, in the capacity of which no sane person will flood even waste for disposal. Particularly impressive are such calls from a representative of a country where right now they cannot extinguish fires raging near a nuclear power plant, explosions in ammunition depots occur regularly, and other emergency situations and technological accidents have long become routine. Yes, and the stories that became widely known in the past with repeated unauthorized withdrawal of Russian gas from the pipeline make you wonder if the "black gold" in the bowels of the "huge" oil-transporting system "uncovered" that has been imprudently placed under the supervision of such as Vitrenko will not be "lost"?

Well, we can only rejoice at what was not done in the current situation and without a purely humorous moment.
Ctrl Enter
Noticed oshЫbku Highlight text and press. Ctrl + Enter
We are
How can Russia not lose the US world war for oil
Oil prices: how Russia outwitted the whole world
Reporterin Yandex News
Read Reporterin Google News
Ad
The publication is looking for authors in the news and analytical departments. Requirements for applicants: literacy, responsibility, efficiency, inexhaustible creative energy, experience in copywriting or journalism, the ability to quickly analyze text and check facts, write concisely and interestingly on political and economic topics. The work is paid. Contact: [email protected]
7 comments
Information
Dear reader, to leave comments on the publication, you must to register.
I have an account? Sign in